Clowney making impact with Seahawks even with only 1 sack 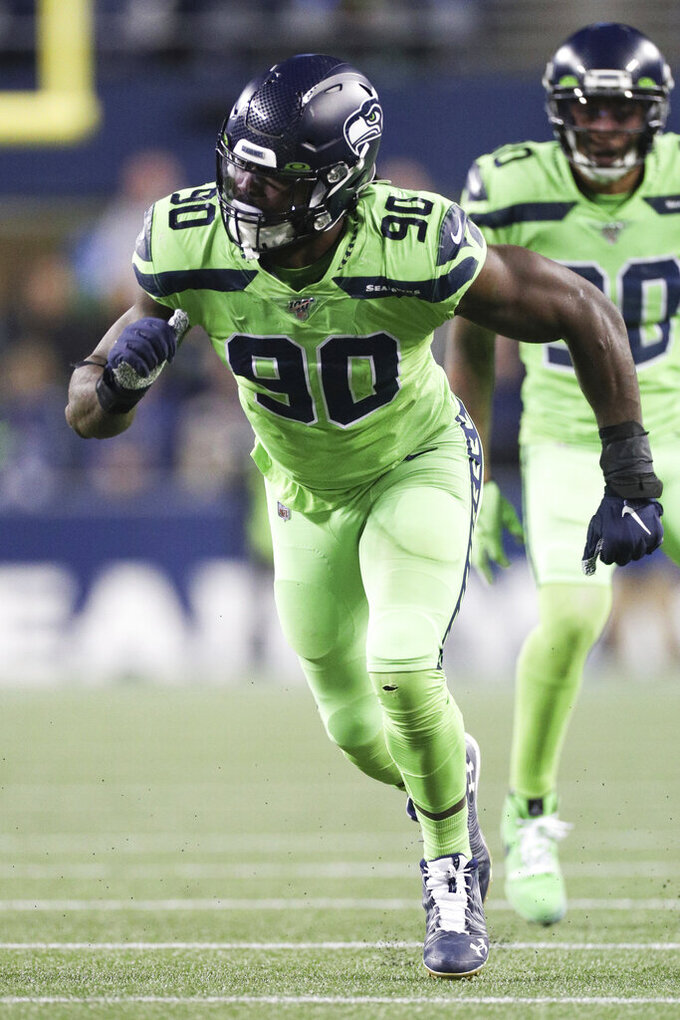 Seattle Seahawks outside linebacker Jadeveon Clowney (90) takes a defensive position during an NFL game against the Los Angeles Rams, Thursday, Oct. 3, 2019, in Seattle. The Seahawks defeated the Rams 30-29. (Margaret Bowles via AP)

RENTON, Wash. (AP) — Five games into Jadeveon Clowney's tenure with Seattle, the defensive end who was supposed to help solve the Seahawks' pass rush problems has only one sack.

That might not seem like the kind of return Seattle was expecting to get when it traded for the former No. 1 overall pick before the start of the regular season. But the reviews of Clowney's performance with the Seahawks defensive line through the first third of the season are entirely positive.

The combination of Clowney, Ziggy Ansah and the rest of Seattle's defensive linemen has yet to pop the way it was expected when the deal was made on Aug. 31.

The Seahawks have only 10 sacks, which ranks 23rd in the league, and their 18 quarterback hits are 30th overall. But so far, those numbers haven't mattered because the Seahawks are heading to Cleveland on Sunday with a chance to reach 5-1 for only the third time in franchise history.

"We keep laughing in the locker room about us not being on the same page, not rushing as good we normally do and being as good as normal ... because we're winning games and we're not playing our best right now which is always a good thing," Clowney said. "You've got room to improve but you're still getting wins. It's great for the team."

Clowney has found ways to be disruptive. His best game to date may have been last Thursday against the Los Angeles Rams where statistically he came away with three tackles, two quarterback hits, a forced fumble and a fumble recovery. But beyond those stats, he was consistently causing problems in both the pass and run game and did so with Seattle playing a different defensive alignment to try to shut down Todd Gurley.

Throw in his interception return for a touchdown a week earlier against Arizona and the Seahawks are clearly getting the kind of play they hoped for from Clowney. Carroll still views Clowney as being in the infancy of the season.

Carroll's wish is that he would have gotten the chance to have an entire offseason with Clowney.

"I think he would've just had the benefit of all of the work offseason-wise with his hands and feet and the things that we do technically. I think he would've been further along," Carroll said. "He's a natural athlete. This comes to him. He's active. He's real active. The thing I really like is he's really active in looking like he's going to come alive and have a big game here in the next couple."

Ansah has yet to have a similar influence, but both could end up getting a boost next week when Jarran Reed returns from his six-game suspension.

Reed had 10 ½ sacks last season and his ability to rush from the interior should create more chances for Clowney and Ansah to get into the backfield.

NOTES: G D.J. Fluker (hamstring) did not practice and is not expected to be available against the Browns. Carroll declined to say who would step in and start. Backup Ethan Pocic (back) was a limited participant in practice, meaning Jamarco Jones is the likely replacement for Fluker. Jones played well after Fluker was hurt against the Rams. ... DE Brandon Jackson, part of Seattle's defensive line rotation, did not practice Wednesday because of a neck injury.