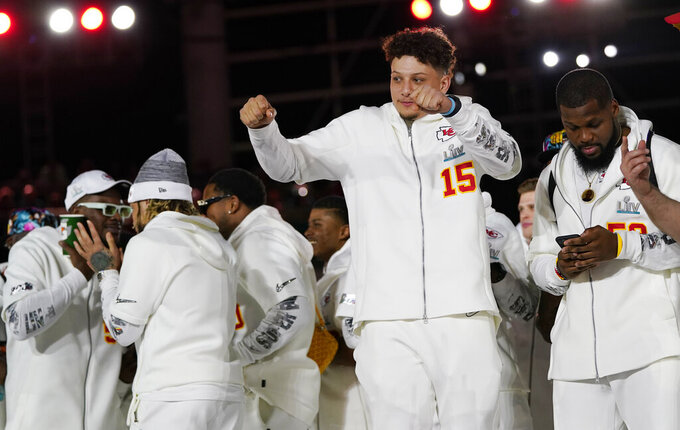 MIAMI (AP) — Jerry Izenberg can still write, as anyone who reads his columns in the Star-Ledger in New Jersey knows. Just the other day he wrote a good one about an aging sports writer who has been to every Super Bowl since the first one in 1967.

That sports writer won’t be in Miami this week. But don’t fear, he’ll still be watching the game — from a casino sports book in Las Vegas.

At the age of 89, Izenberg decided to end his streak of Super Bowls at 53 — or LIII in NFL lingo. His absence at the game leaves 91-year-old Jerry Green of Detroit as the only daily newspaper writer who will have attended all 54 games, though writer/blogger Dave Klein has also been to every game.

Thankfully, in today’s fractured media world, the decision was his alone. Izenberg could have gotten on a plane to Miami, but he’s slowing down physically and Super Bowl week can be difficult for even a 20-something blogger to navigate.

The legs, he says, are always the first to go.

``I’m not kidding myself, discretion became the better part of valor,’’ Izenberg said in a phone interview. ``One fall and that will be it.’’

He was poolside with Joe Namath before Super Bowl III, the game that Namath famously predicted a win for the upstart New York Jets. He argued with former commissioner Pete Rozelle over having the 1970 Super Bowl — the last Super Bowl the Kansas City Chiefs were in — outdoors in a frigid New Orleans so that the city could one day have a team of its own.

And he can tell stories about everything from fighting through the snow to get in the Silverdome in Detroit to listening to Raiders owner Al Davis talk about how the Raiders were going to stuff the famed Green Bay sweep in the second Super Bowl.

One thing you won’t get from him is a review of the halftime music acts.

Always hustling, too, which is why he had more than enough material to write the definitive book about Rozelle in 2014 — one of a number of books Izenberg has penned over a career that began at the Star-Ledger in 1951 when he was a student at Rutgers University.

He's a columnist emeritus now, living the good life in Henderson, a suburb of Las Vegas, where he still goes to the big fights.

Oh, the stories Izenberg can tell, about Super Bowls great and not so great. He’s covered them from the beginning, when at the age of 36 he sat in the press box of the Los Angeles Memorial Coliseum and watched the Packers win the first Super Bowl before a crowd that half filled the massive stadium.

Before that game, Izenberg and a few other writers went out to the Green Bay hotel in Santa Barbara to find Vince Lombardi pacing in the driveway, fuming about how unfair it was NFL owners were warning him that he couldn’t lose a game to the upstart Chiefs from the AFL.

Inside the hotel, his players didn’t feel nearly as much pressure.

``I asked (guard) Fuzzy Thurston, do you know who is on this team?’’ Izenberg recalled. ``Not really, he said, we saw one film. We’re going to beat this team and beat them easy because we’ve got the best coach who ever lived.’’

In those days, writers would go to team hotels and interview players in their rooms. Catching Namath poolside wasn’t a big deal, and the NFL hadn’t even begun thinking about a media opening night that would turn into the circus it became.

It’s different today, a big reason Izenberg is ending his streak. The logistics of covering Super Bowl week are daunting, with long bus rides and walks, and the reward is often the same quotes used by reporters who simply wait in a media room for the quote sheet — or now, audio links — to come out.

``I’m going to miss it, that’s for sure,’’ he said. ``But I tell you what I won’t miss is the line from one end of a very large press room to the other to get to the men’s room. I will not miss the cheap box lunches where you’re eating the box in the fourth quarter. I won’t miss being herded and shepherded around.’’

The biggest thing Izenberg will miss are his friends. Legends of the business such as Miami’s Edwin Pope, Blackie Sherrod of Dallas, Jack Murphy from San Diego and the great Jim Murray of the Los Angeles Times.

They were all part of the same business, separated by thousands of miles most of the year but always happy to get together at big events like the World Series, Kentucky Derby and, of course, the Super Bowl.

His friends are mostly all gone now, and his membership in a rare club is about to come to an end, like it has for all of them. Izenberg will watch this Super Bowl from the comfort of the sports book at the Sunset Station.

He will, of course, write a column about the degenerate gamblers and what they thought of the game.

Because while he may not be in Miami, a good writer never really quits.