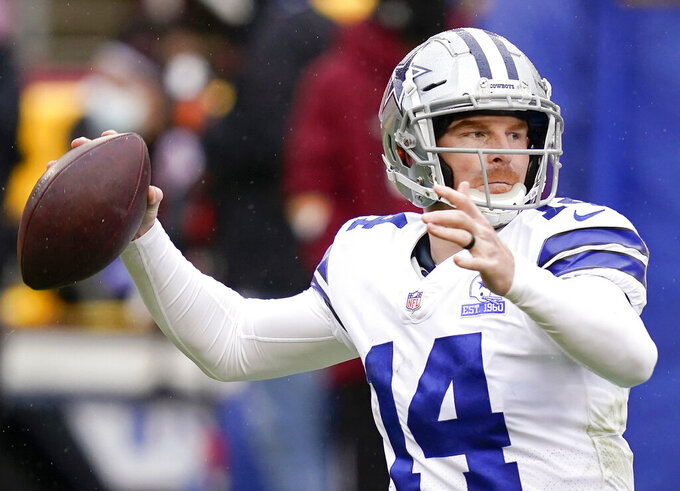 FILE - In this Oct. 25, 2020, file photo, Dallas Cowboys quarterback Andy Dalton (14) looks to pass the ball against the Washington Football Team in the first half of an NFL football game in Landover, Md. Dalton has been cleared for practice after clearing the protocols for a concussion and COVID-19. Coach Mike McCarthy said Dalton participated in an informal practice Monday, Nov. 16, 2020, the first day back for the Cowboys coming off their open week. (AP Photo/Patrick Semansky, File)

FRISCO, Texas (AP) — Dallas quarterback Andy Dalton has been cleared for practice after getting through the protocols for a concussion and COVID-19.

Coach Mike McCarthy said Dalton participated in an informal practice Monday, the first day back for the Cowboys coming off their open week. Dallas (2-7) visits Minnesota on Sunday.

Dalton got a concussion Oct. 25 at Washington on a hit that led to the ejection of linebacker Jon Bostic. Dalton was expected to be cleared from that when the 10th-year player was placed on the COVID-19 reserve list Nov. 2.

The setbacks with Dalton, who replaced injured star Dak Prescott, led to the Cowboys starting four different quarterbacks in a span of five weeks. The last two, rookie Ben DiNucci and seventh-year QB Garrett Gilbert, each made his first career start.

McCarthy wouldn't say Dalton would start against the Vikings. General manager Jerry Jones and executive director of personnel Stephen Jones both have said Dalton is the starter if he's available.

Dalton started for nine years in Cincinnati before signing to be Prescott's backup after the Bengals drafted Joe Burrow first overall and moved on from the former TCU standout.

After leading the Cowboys to a pair of fourth-quarter field goals in a come-from-behind win over the New York Giants, Dalton struggled against Arizona and Washington before the hit that caused the concussion.

Dallas has scored just one meaningful touchdown in four games without Prescott — Gilbert's first-half pass in a 24-19 loss to Pittsburgh before the open week. Gilbert has been the most efficient of the replacements for Prescott, who is out for the season with a broken ankle.