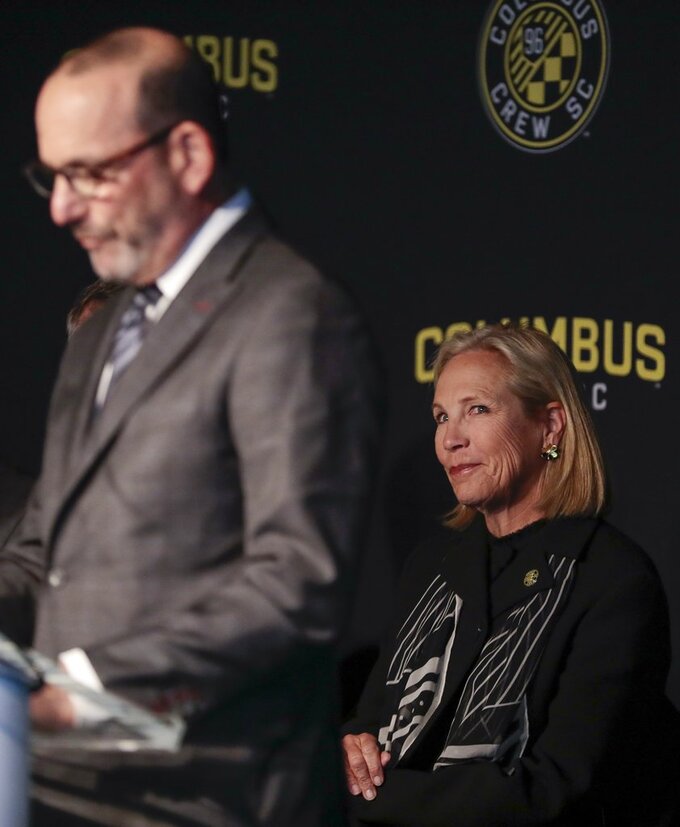 COLUMBUS, Ohio (AP) — The Columbus Crew has new owners and management, and the team plans a summer groundbreaking for a $230 million downtown stadium.

The Save the Crew movement gained momentum last year after the team owner, Precourt Sports Ventures, announced plans to move the franchise to Austin, Texas.

"We think this about soccer. We think this about a team, but it really isn't," Edwards said Wednesday as new owners and management were introduced. "It's about a community. It's about having pride in our city, and it's about having pride in our team. All those things roll into the fabric of our community. For us to not have this team here would have left a hole in our city, and my family said that wasn't acceptable, and we were going to do whatever we could to figure out a way to keep this team."

Caleb Porter, who won an MLS Cup in 2015 with the Portland, was hired as coach to replace Gregg Berhalter, who left to coach the U.S. national team. Porter said local enthusiasm for the team drew him to the job.

"When I saw all of you in this community rallying behind this club, that's the type of club I want to manage, a club that's relevant, a club that the people are proud of, a club where they're going to fight and roll up their sleeves to save it," Porter said. "I felt compelled to come back and jump on board with that movement to save the Crew — but not just save it but elevate it."

The new stadium will be near Nationwide Arena, home of the Columbus Blue Jackets, and Huntington Park, where the Triple-A Columbus Clippers play. The plan also calls for redevelopment of the team's 20-year-old stadium north of downtown into a training facility and community sports park.

"One of the things we have to get going on is — because we want to break ground really quickly on the stadium — is doing the whole, entire comprehensive plan," Dee Haslam said. "We've done this so fast. I don't know that anyone has ever put a concept together (this fast), and we hope to be in the ground this summer for sure in order to make deadline. I think we're going as fast as we can go."

"It's a big investment," she said. "We're committed to winning. It's so important to win for a community. We obviously have experienced not winning (with the Browns), so winning is so important. We get that message loud and clear."