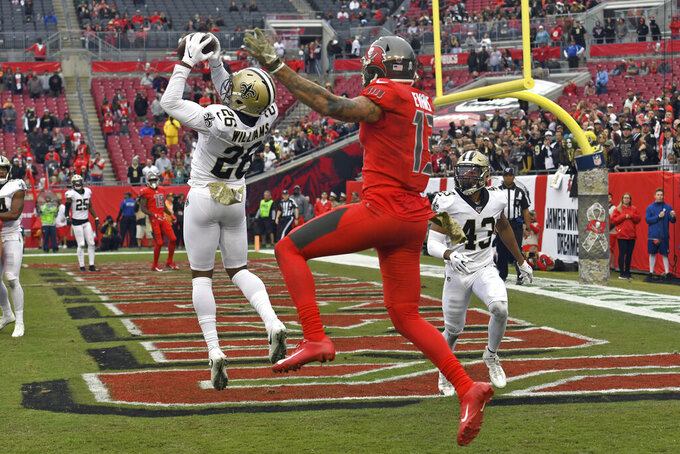 The Tampa Bay receiver had just one catch for 6 yards in the first half and finished with four overall in the Buccaneers' 34-17 loss to the Saints on Sunday.

“It's the exact same coverages as the last time they played us” Evans said. “A lot of two-man and cover-2 almost every single snap. If I'm outside, it's pretty much a double-team.”

Evans said other teams employ a similar scheme at times but not as “big of a dose.”

“If you look up the stats, they're probably in two-high at least 90 percent,” Evans said. “They're a good defense. They can switch it up on you. This time they just were very basic. They were just getting after us.”

Evans produced 69 yards on his four grabs, including a long of 27 late in the fourth, to move within 7 yards of joining Randy Moss as the only players to reach 1,000 yards receiving in each of their first six NFL seasons.

“He's never one-on-one against these guys,” Bucs coach Bruce Arians said. “It's a matter of finding ways to get him balls. We did a better job in the second half.”

An eventful fourth quarter saw Evans being called for offensive pass interference near the line of scrimmage, negating a 6-yard reception on a fourth-and-1 near midfield with the Bucs trailing 27-17.

“It was a simple release, what every receiver in the NFL does,” Evans said. “It cost us pretty big. That's just how it goes. The ref is a human being. He made an error.”

Arians challenged the call, which stood after a video review.

“I have no comments on officiating,” Arians said. “They already wrote up the letter for my file.”

Evans also left the game briefly in the fourth when he had the wind knocked out of him while being tackled by Saints safety Vonn Bell.

The loss dropped Tampa Bay to 3-7.

“Obviously, I don't like losing,” Evans said. “Nobody likes losing. But I'll never stop fighting, ever. This is my job. I love doing what I do, and my teammates do as well.

“We're going to fight to the end and live with the result.”