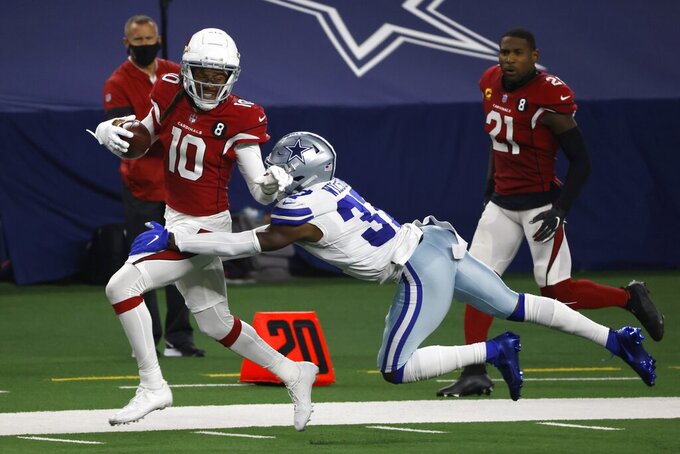 Arizona Cardinals wide receiver DeAndre Hopkins (10) is brought down after a long gain on a catch by Dallas Cowboys' Donovan Wilson (37) in the second half of an NFL football game in Arlington, Texas, Monday, Oct. 19, 2020. (AP Photo/Ron Jenkins)

His first season as coach of the Dallas Cowboys is coming apart because of how badly his team is losing that battle.

Dallas is minus-12 in turnover margin, the worst in the NFL through six games since 2013 and the worst for the franchise since its inaugural — and winless — season of 1960.

The Cowboys (2-4) committed four turnovers without getting one in a 38-10 loss to Arizona on Monday night, and take no solace in being in first place in the woeful NFC East heading into Sunday's visit to division rival Washington.

“I have a continuing issue with ball security on my football team,” McCarthy said. “That’s something I personally take a lot of pride in and how it reflects on how you play the game of football. I’m not getting it done right now.”

Ezekiel Elliott has five fumbles (four lost), already within one of the two-time rushing champion's career high for a full season from 2018. Andy Dalton threw two interceptions in his first start replacing the injured Dak Prescott.

“In practice, I’ve been focusing in on just kinda keeping it tight and not having it loose,” Elliott said. "I don’t know. I need to figure something out.”

The Cardinals scored 24 points off those turnovers, and 13 of Dallas' NFL-leading 15 giveaways have led to points — 11 of them touchdowns. The only two this season that didn't result in points were interceptions near the game's end.

The 84 points off turnovers given up by the Cowboys are also a reflection of a defense that has slipped to 31st against the run and allowed at least 250 yards rushing in two of the past three games. For the season, Dallas is allowing 5.15 yards per carry.

“We turned the ball over. We didn’t handle the adversity of it,” McCarthy said. “These are things that have gone on so far this year and we need to turn it (around) because it’s affecting the outcome of games clearly.”

Nothing, other than having the lead in a division with three one-win teams, and even that doesn't mean much to normally optimistic owner Jerry Jones. “I’m not in the feel-good mood frankly that we got manna from heaven being in the East,” Jones said on his radio show Monday. “When you’re not playing any better than we are, it’s hard for me to basically look to the endgame, which is to win the East, and get excited about the fact that we’re better than anybody.”

Plenty, starting with trying to play with a lead for a change. The Cowboys never led in two of the three games on a rare long homestand that finished 1-2.

Prescott gave the Cowboys chances to win despite deficits of 15 points or worse in three straight games. While Dalton led two fourth-quarter drives to field goals to beat the New York Giants two weeks ago, he never provided the sense Dallas could recover from 21-0 down in the second quarter against Kyler Murray and the Cardinals.

Receiver CeeDee Lamb continues to be a steady presence. He's the only rookie since at least 1950 with five or more catches in the first six games of his career after catching seven passes for 64 yards.

Dalton was fortunate that he didn't have at least two more interceptions on several ill-advised throws. One came early, and Arizona linebacker Jordan Hicks was the only remotely close to the ball. He couldn't hang on to the ball, and probably would have scored if he had. Also, the analytics don't look good compared to Prescott on throws without pressure and getting the ball down the field.

Four-time All-Pro right guard Zack Martin's health will be a big topic this week after he missed most of the Arizona game with a concussion. McCarthy said it will likely be late in the week before the Cowboys know if he can play.

Dallas is about to be on its third left tackle with Brandon Knight injuring a knee against the Cardinals and needing surgery. McCarthy said Knight will be out at least a couple of weeks. He was starting in place of seven-time Pro Bowler Tyron Smith, out for the season after neck surgery.

Executive vice president of personnel Stephen Jones said the club expects to get backup tackle Cameron Erving back from a knee injury that has sidelined him since the opener. Erving could slide into Knight's spot.

94 — It might not be a huge boost to the pass rush right away. But it's still a lift for the Cowboys to get No. 94, Randy Gregory, back from suspension. He's eligible for the first time this week, and Stephen Jones said he's expected to play.

The visit to Washington is the first of two straight NFC East road games (Philadelphia is the second). Lose both, and Dallas is probably headed for a top 10 draft pick for the first time since 2016. The Cowboys had that fourth overall pick (and drafted Elliott) in large part because they finished 4-12 after quarterback Tony Romo broke his collarbone in Week 2.