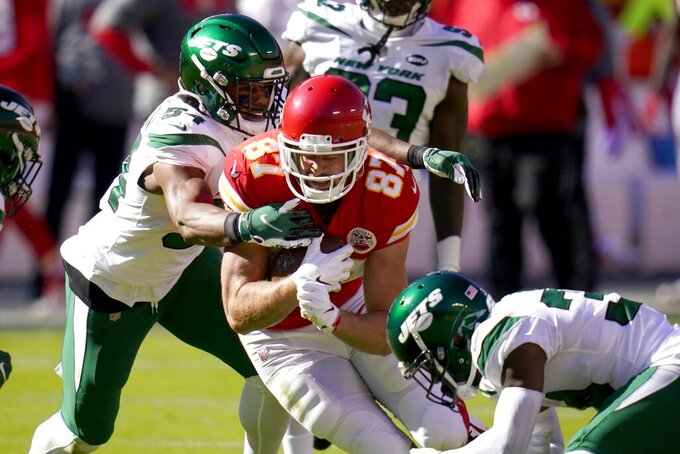 PITTSBURGH (AP) — The image of Avery Williamson trying to hitchhike in the rain is legitimate.

Yes, that really was the veteran linebacker in full New York Jets gear with an umbrella in his left hand and his right thumb up looking for a ride in a picture of Williamson that quickly went viral hours after he was traded from New York to Pittsburgh.

The timing, however, might have been a little off. Williamson initially snapped the pic last fall while recovering from a torn ACL in his right knee as a way to show how much he missed football. When he decided to repurpose it after being sent from the NFL's worst team to one of its best, he was caught off guard by the response. The post received more than 94,000 likes.

“I really didn't expect it to go crazy like that,” Williamson said Thursday.

The culture shock didn't stop there. While Williamson is quick to point out the winless Jets still have a good locker room despite their spot in the NFL's basement, the vibe with the Steelers — who are 8-0 going into Sunday's visit from Cincinnati (2-5-1) couldn't be more different.

“It's a winning mentality, and we're focused on winning and getting results,” Williamson said.

The joy of arriving in Pittsburgh was tempered with the knowledge he was switching teams in the middle of a pandemic. Williamson was forced to self-quarantine for five days upon his arrival. He didn't get a chance to visit the team's practice facility until last Saturday. He made the trip to Dallas with the rest of his new teammates, but was inactive as the Steelers rallied to beat the Cowboys.

The fact he didn't play a snap had little effect on the joy he felt afterward.

“I hadn't won in a while," Williamson said.

He's not kidding. The last time Williamson was on the field when his team left it on the right side of the final score was Dec. 9, 2018, when he had five tackles as the Jets beat the Bills. Going 701 days between wins wasn't exactly fun. That shouldn't be an issue with the Steelers, who are off to the best start in franchise history.

Coach Mike Tomlin likens each season as a “moving train,” one that picks up momentum as it goes along. Williamson is focused on making sure he can get up to speed as quickly as possible. He called his first two days of practice this week as “smooth," though his body definitely felt it after being forced to take a week off.

Williamson has little choice but to adjust quickly. Starting inside linebacker Vince Williams is on the COVID-19 list due to contact tracing, meaning he is being forced to self-quarantine until at least Saturday. While the team expects Williams to play against Cincinnati provided he continues to test negative, it likely means Williamson can expect to run onto the Heinz Field turf in black and gold on Sunday.

“He’s going to have to be ready for us,” defensive coordinator Keith Butler said, later adding “Avery has done a good job for us. He is still learning. We are going to try and get as many reps for him as we can and let him continue to learn. I think he will help us.”

The defense could use a lift, particularly against the run. Baltimore racked up 265 yards on the ground two weeks ago, and Dallas piled up 144 despite starting Garrett Gilbert at quarterback. The 6-foot-1, 246-pound Williamson is a sure tackler. He thinks he'll be fine, thanks in large part to playing behind a defensive line that features Cam Heyward and Stephon Tuitt among others.

“They got the big guys, they definitely have some dominant guys that can stop the run,” Williamson said. "I’m here to help out as much as possible. As long as we’re winning, that’s the main thing. We want to try and keep as many rush yards off the table as possible.”

Williamson is a rental at this point. He is in the final months of a three-year, $22.5-million deal he signed with the Jets in 2018. He doesn't remember the Steelers being in the mix when he hit the open market back then after spending the first four seasons of his career with Tennessee. Not that he's complaining.

“I was definitely hoping for the opportunity to come here,” Williamson said. "I got my shot now and it’s the perfect time to be on this team. I’m just trying to take advantage of this opportunity.”

NOTES: Rookie running back Anthony McFarland Jr. did not practice on Thursday with what the team termed an illness. McFarland was a full participant on Wednesday. ... CB Mike Hilton, trying to return from a right shoulder injury that's forced him to miss three games, was limited a day after being a full participant. ... DT Tyson Alualu (knee) and Isaiah Buggs (ankle) were also limited.