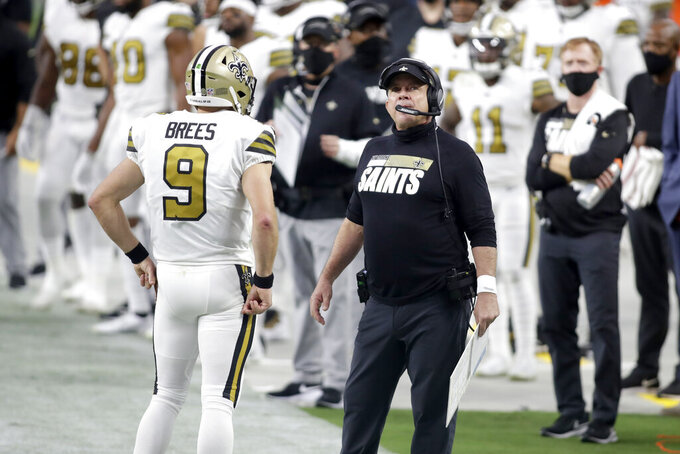 Too bad none of their fans were able to see it in person.

Carr threw three touchdown passes and the Raiders gave their new fans in Las Vegas plenty to celebrate even if they weren’t allowed in the stadium by beating the New Orleans Saints 34-24 on Monday night.

The new $2 billion stadium in the desert held its first event following the Raiders’ move from Oakland without any fans because of the COVID-19 pandemic.

“Hopefully our fans, even though they couldn't be here tonight, hopefully see something they like,” coach Jon Gruden said. “We can't wait to get them back in this place. It's such a great place to see a game.”

That was one of the few things that didn’t go right for the Raiders (2-0), who overcame an early 10-point deficit to the Saints (1-1) and opened the season with two straight wins for the fourth time in the past 25 seasons.

“This organization means everything to me,” Carr said. “They’ve stuck behind me through some hard times. Through some times our team, we struggled, there’s no doubt about it. But when you can get on the other side of things, be 2-0, as the Las Vegas Raiders, that’s a pretty cool thing.”

Carr was in control for most of the night, completing 28 of 38 passes for 282 yards. Darren Waller had 12 receptions for 103 yards as Carr’s most trusted option.

Carr engineered four straight scoring drives in the second and third quarters to turn a 10-0 deficit into a 24-17 lead.

“Derek Carr was awesome tonight,” Gruden said. “He made some some plays today that very few guys that I’ve coached could make. I tip my hat to him.”

Picking apart the New Orleans defense with short passes, the Raiders controlled the clock and kept Drew Brees and the Saints off the field. Las Vegas converted 10 of 17 third downs and also went for it successfully twice on fourth down.

The Raiders even survived a fumbled pitch by Jalen Richard by stopping the Saints and then scoring on the ensuing drive on a 20-yard run by Richard.

After being gashed on the ground early, the Raiders did a good job against Brees, who struggled without his injured No. 1 receiver Michael Thomas.

Brees went 26 for 38 for 312 yards with one touchdown and a key interception at the end of the first half that set up a field goal for the Raiders.

“If there’s one thing I wish I could take back from the game it would be that,” Brees said. "Otherwise, we had a lot of metal errors. I felt like we were not playing as fast and just as sure and confident.”

After the Saints cut the deficit to 31-24 on Alvin Kamara's second TD run, the Raiders took advantage of a pass interference call against Janoris Jenkins and then iced the game with a 54-yard field goal by Daniel Carlson.

“We got to do a better job coaching,” coach Sean Payton said. “I don’t think it’s going to be a real pleasant film to watch — for some of our star players as well.”

The Raiders almost had a big blunder on the opening drive of the third quarter when Carr fumbled a snap on third down from the 1. Alec Ingold recovered for Las Vegas and Carr threw a 1-yard TD to Waller on fourth down to give the Raiders their first lead of the game at 24-17.

Carr went 14 for 18 for 139 yards in the quarter, throwing a 3-yard TD pass to Ingold and a perfectly placed 15-yarder to Zay Jones. The TD was capped by Jones gathering his teammates and pretending to give them all hand sanitizer.

Nicholas Morrow then intercepted Brees late in the half, setting up Daniel Carlson’s 28-yard field goal that made it 17-17.

Both head coaches often did not wear masks on the sideline despite an edict earlier in the week to do so. A person with knowledge of the punishment told The Associated Press that at least three coaches have been fined $100,000 for violating the league’s rules that they wear face coverings on the sideline.

Gruden apologized while revealing for the first time that he had contracted the coronavirus.

“I’ve had the virus. I’m doing my best,” Gruden said. “I’m very sensitive about it. I’m calling the plays. I just want to communicate in these situations. I apologize. If I get fined, I will have to pay the fine.”

Al Davis’ widow Carol Davis got the honor to light the ceremonial torch in honor of her late husband before the game. Her son, Mark, who runs the team, didn’t attend the game as he has said he won’t come until fans are allowed at the new stadium.

Saints: LG Andrus Peat left in the fourth quarter with an undisclosed injury.

Raiders: LG Richie Incognito left the game in the first half with an Achilles injury that bothered him this past week in practice and didn’t return.