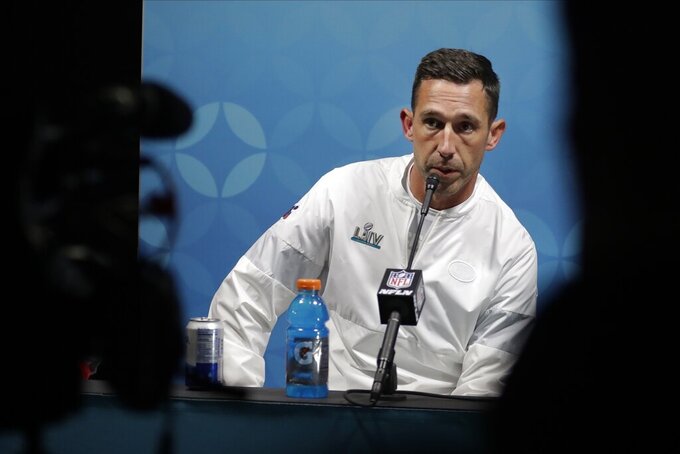 A year ago, Bill Belichick borrowed heavily from Vic Fangio's blueprints to throttle the high-scoring Los Angeles Rams in the Super Bowl.

Fangio's brilliant game plan in the Bears' 15-6 win over LA in Week 14 provided the backbone of New England's 13-3 victory in Super Bowl 53.

Had Kyle Shanahan studied Fangio's philosophy when facing Patrick Mahomes, maybe the San Francisco 49ers would have been the ones celebrating in Miami instead of the Kansas City Chiefs.

Nobody would want to borrow Fangio's call sheets from his games against K.C. in 2019, when the first-time head coach's Denver Broncos were swept by a combined 53-9.

Brandon McManus' extra point after an opening touchdown made it 7-0. But a Chiefs player was whistled for encroachment, and Fangio chose to take the point off the board and go for 2 instead.

Although the decision backfired when Phillip Lindsay was stuffed shy of the goal line, it proved Fangio's point that you have to be as aggressive as possible when facing the young Patrick Mahomes and grizzled coach Andy Reid.

Super Bowl 54 marked Reid's 366th game as a head coach and his second Super Bowl appearance. He had lived for the last 15 years with the criticism that he wasn't aggressive enough in Philadelphia's 24-21 loss to New England in Super Bowl 39.

Reid was going to go for the gusto Sunday.

Shanahan, on the other hand, kept settling for field goals and his passiveness at the end of the first half came back to haunt him when the 49ers blew their 10-point fourth-quarter lead.

With a plodding first half winding down, the 49ers stopped running back Damien Williams after a short catch to bring up fourth-and-13 with 1:53 left before J-Lo and Shakira danced across the halftime stage.

Shanahan didn't use one of his three timeouts, a concession that he was satisfied to go into halftime tied at 10.

As Shanahan let the seconds tick away, the camera cut to 49ers general manager John Lynch frantically signaling that his coach needed to call timeout, then looking perplexed that he didn't.

After a touchback, San Francisco got the ball with 59 seconds left in the half.

Only after a pair of runs brought up third-and-5 and Kansas City called timeout with 20 seconds left did Shanahan get aggressive. Jimmy Garoppolo completed a 20-yard pass to Jeff Wilson before unloading a 42-yard heave to George Kittle, who was whistled for a borderline offensive pass interference call with 6 seconds remaining.

So, Garoppolo knelt at his 34 and the teams retreated to their locker rooms locked in that tie that a hot Shanahan was OK with just moments earlier.

The Niners got the second-half kickoff and reached the Kansas City 24, but on fourth-and-2, Shanahan settled for the field goal, just as he had on his team's opening drive in the first half when he sent kicker Robbie Gould out on fourth-and-5 from the K.C. 20-yard line.

The Chiefs answered with a touchdown drive for a 7-3 lead, rewarding Reid for going for it on fourth-and-1 from the San Francisco 5-yard line.

The 49ers ran roughshod over their opponents in the playoffs, averaging 5.77 yards a carry when you take out Garoppolo's half a dozen kneel-downs. That number in the Super Bowl was 6.68 yards, nearly as good as the 7.23 yards they averaged against Green Bay in the NFC championship.

They had to go for it on fourth-and-10 from midfield after Kansas City had stormed ahead 24-20 in the waning minutes, and Garoppolo was sacked for a 9-yard loss.

The only other time they went for it on fourth down in these playoffs was against Minnesota in the divisional round when they were up 27-10 in the closing minutes and running back Matt Brieda gained 2 yards on fourth-and-1 only to cough up the football.

Maybe that spooked Shanahan, but the stakes were huge Sunday night and he was going up against Mahomes and Reid, a duo that dials up scores in bunches.

Mahomes' late-game heroics earned him the game's MVP honors despite his so-so performance until crunch time. That allowed him to fulfill a longtime dream of saying he was going to Disneyland to celebrate his championship.

Two teammates who were deserving of going to the Magic Kingdom themselves were Williams, who scored twice in the final 2:44, and Tyreek Hill, whose 105-yard night was highlighted by a 44-yard grab on third-and-15 with seven minutes left that sparked K.C.'s 21-0 game-ending run.

The Chiefs closed out the Titans with a 28-7 run in the AFC championship a week after they outscored Houston 51-7 after falling behind 24-0. So in their three playoff games, they closed out their opponents 100-14, another reason Shanahan should have been more aggressive before it was too late.

POTUS, I'VE A FEELING WE'RE NOT IN KANSAS ANYMORE

President Donald Trump faced criticism for fumbling his congratulatory tweet following the Chiefs' victory, tweeting: "You represented the Great State of Kansas and, in fact, the entire USA, so well. Our Country is PROUD OF YOU!”

Although the Missouri-Kansas state line divides metropolitan Kansas City, the team itself is based on the Missouri side, a fact that was ignored when the president's original tweet was quickly deleted and replaced with a new message: “We are proud of you and the Great State of Missouri. You are true Champions!”