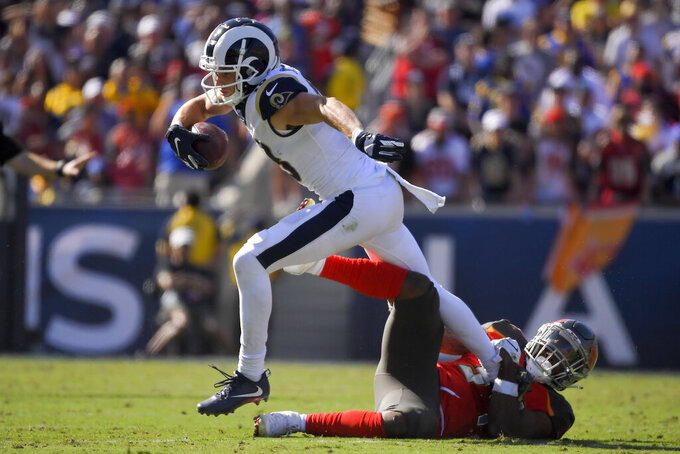 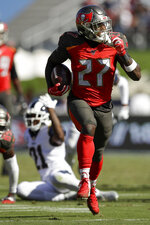 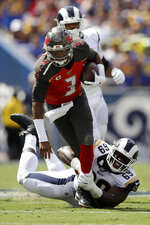 With one big play after another, the Bucs made sure it wouldn't happen against the defending NFC champions.

And nobody came up bigger than Shaquil Barrett and Ndamukong Suh.

Jameis Winston passed for 385 yards and threw two of his four touchdown passes to Chris Godwin, and Suh returned Jared Goff's fumble 37 yards for a touchdown with 1:06 to play in the Buccaneers' 55-40 victory over previously unbeaten Los Angeles on Sunday.

Godwin had career highs of 12 catches for 172 yards as the Buccaneers (2-2) jumped to an early 21-0 lead and then scored 24 points in a wild fourth quarter to complete the highest-scoring game in the franchise's 44-year history.

Suh made a TD return against his old teammates after Barrett forced the fumble with his ninth sack of the young season. Tampa Bay gave up 518 total yards, but hung on for its first win over the Rams since 2010 in a potentially momentous performance under first-year coach Bruce Arians.

"We knew it was going to come down to the last five minutes of that game, whether we played well or not," Arians said. "We did today, and we're learning. It was a tough loss last week, but victories like these galvanize a team, and this team is starting to believe and see what they can be."

Goff passed for a career-high 517 yards and two touchdowns, but the Rams' $134 million quarterback also threw three interceptions for the second time in his career. Goff coughed it up while being sacked by Barrett as the Rams (3-1) attempted a tying drive, and Suh scooped and scored against the team with which he reached the Super Bowl last season.

"They did a great job applying that pressure and keeping it on all day," Goff said. "It's frustrating. It's something we need to get fixed quickly."

Peyton Barber and Ronald Jones II rushed for TDs, and Cameron Brate also had a TD reception . Winston picked apart the Los Angeles secondary while going 28 of 41, while Godwin had the most catches by a Tampa Bay receiver since Keyshawn Johnson in 2001 — and it almost wasn't enough.

"It just solidifies something that we already know: that we can play with anybody," Godwin said.

Tampa Bay went up 45-27 with 11:35 to play when Mike Evans burned Marcus Peters for a 67-yard TD capped by some goal-line showboating. But after Cooper Kupp caught a 29-yard TD pass, Peters returned an interception 32 yards for a touchdown with 8:11 to play.

Tampa Bay went back ahead by eight when Winston led a 72-yard drive capped by Matt Gay's short field goal with 2:35 left. Goff got the Rams to midfield, but Barrett and Suh finished strong in Tampa Bay's first game in Los Angeles since 1993.

Robert Woods had 13 catches for 164 yards, and Kupp added nine catches for 121 yards. Goff went 45 of 68 while under regular pressure in a Rams offense that didn't look much like the relentless machine built by Sean McVay in his first two seasons in LA, despite its lofty statistics and final point total.

"Knowing McVay and being with them all last year, they want to pass the ball," Suh said. "They pride themselves on getting yardage and making plays in the air, although they have some great running backs."

Todd Gurley rushed for two touchdowns, but got only five carries for 16 yards in the Rams' nonexistent running game.

"This is really a wakeup call for everyone, not just the offense," McVay said. "The only blessing is we have a short week. The only thing that we can really control is we play again on Thursday."

After the game, the Bucs shared a poignant moment on FaceTime with general manager Jason Licht, whose father died suddenly in Nebraska on Saturday after attending the Cornhuskers' game. The players and coaches remotely gave the game ball to Licht, whose father's favorite Nebraska player was Suh.

Barrett's late sack was his ninth already this season. He matched Mark Gastineau (1984), Kevin Greene (1998) and Kabeer Gbaja-Biamila (2001) for the most sacks in NFL history through a team's first four games since sacks became a stat in 1982.

Buccaneers: Evans injured his hand in the second half, but returned. ... WR Breshad Perriman didn't return from a hamstring injury in the first quarter.

Rams: Peters scored despite taking a helmet-to-helmet hit at the goal line from left tackle Donovan Smith that kept Peters out of the rest of the game under evaluation for a concussion. ... LB Bryce Hager injured his shoulder during the first half. ... Rookie S Taylor Rapp left the field in the third quarter unable to put weight on his left ankle.

Buccaneers: Back on the road Sunday to face the New Orleans Saints, the other competitor in last season's NFC championship game.

Rams: A quick trip to face the Seattle Seahawks on Thursday night in their first NFC West game of the year.