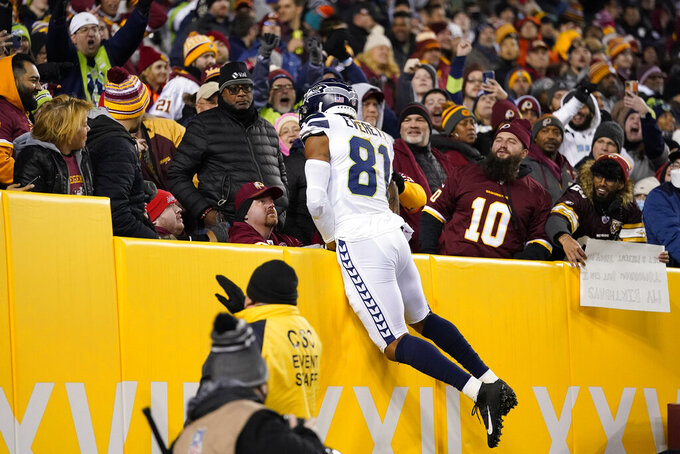 Seattle Seahawks tight end Gerald Everett (81) leaping into the stands after scoring a touchdown against the Washington Football Team during the first half of an NFL football game, Monday, Nov. 29, 2021, in Landover, Md. (AP Photo/Julio Cortez)

SEATTLE (AP) — When San Francisco lost at home in Week 4 to Seattle, a game in which its starting quarterback left injured, it appeared the 49ers' season was about to spiral into a downfall.

It ended up being the second setback of a four-game losing streak for the 49ers. But instead of watching its season crumble, San Francisco has rallied and it’s the Seahawks who have fallen apart going into their matchup Sunday.

San Francisco has won three straight and four of five, surging back into playoff contention in the logjammed NFC postseason picture. In fact, there are only two NFC teams that seem to be on the outside of the playoff race as December begins: winless Detroit and the hapless Seahawks.

“We don’t look at it as we just arrived,” 49ers coach Kyle Shanahan said. “We look at it as we’ve done right three weeks in a row. We just look at it that way and we know where we have been at times this year, especially losing the amount in a row that we did.”

If the Niners (6-5) can keep their hot streak going, they’ll have to do it short-handed. Deebo Samuel, who has become one of the bigger offensive weapons from multiple positions in the league, is expected to be out with a groin injury. San Francisco also expects to be without starting middle linebacker Fred Warner.

Not having Samuel takes away one of the main dynamics to what the 49ers try to do offensively. Whether as a pass catcher or a ball carrier, Samuel has become a massive headache for any defense facing San Francisco.

“I think Trent (Sherfield) did a great job of stepping into the game when Deebo went down, made a big third-down conversion for us. Other guys stepping up and just moving some guys around,” QB Jimmy Garoppolo said. “I think it will be a little easier this week with the week to plan for it, but just guys have to step up.”

While San Francisco has plenty it’s playing for, Seattle (3-8) is in the rare position of playing mostly meaningless games for the final six weeks. The Seahawks have lost three straight and six of seven since beating the 49ers in Week 4.

The only NFC team with a worse record is Detroit. And while the Seahawks haven’t been mathematically eliminated from playoff contention, it’s a matter of time before that happens.

Despite the circumstances, Pete Carroll has no plans to rest his regulars, including struggling quarterback Russell Wilson. Carroll’s unwavering optimism remains even if Seattle has only a minuscule chance of getting back into the playoff conversation.

“My resume shows that I’m an overcomer,” Wilson said. “So the reality for me is I know what’s going to happen. I know every time there’s adversity, there’s something great on the other side of it.”

Seattle had five straight three-and-out possessions last week against Washington, had only 10 first downs and barely 18 minutes of possession, both season lows. Wilson missed several routine throws against Washington and since returning from finger surgery he’s not been able to reconnect with DK Metcalf, who seems to have disappeared from the offense.

When Warner and Dre Greenlaw went down with injuries last week, that left Azeez Al-Shaair as the only healthy starting linebacker for the 49ers. While that might have been a big concern early in his career Al-Shaair has developed into a more dependable player and delivered a team-high eight tackles along with an interception and fumble recovery that led to 10 points.

Al-Shaair might need to have a big role again this week as the defensive play-caller with Warner and Greenlaw likely out again.

“I always think Azeez has made some plays for us,” coach Kyle Shanahan said. “But I think the more reps he’s gotten in these few years, taking a starter role, I think him making mistakes, he’s got a lot less. The more that happens, the more confidence you get, and that’s why he’s playing at his best when he is doing those things.”

Elijah Mitchell seemed like a luxury pick when San Francisco took him in the sixth round last spring after already trading up to take running back Trey Sermon to add to a group that already had starter Raheem Mostert, Jeff Wilson Jr. and several other veterans.

But the little-known player from Louisiana-Lafayette has become San Francisco’s top back this season after Mostert went down with a season-ending knee injury. Mitchell is fourth in the NFL with 86.6 yards rushing per game this season.

Remember when Seattle playing at home was almost an automatic victory? That hasn’t been the case this season at Lumen Field, where the Seahawks are 1-5. Seattle went 7-1 at home last season when it played without fans, but lost to Los Angeles in the opening round of the playoffs.

San Francisco has lost seven of its last eight trips to Seattle. '