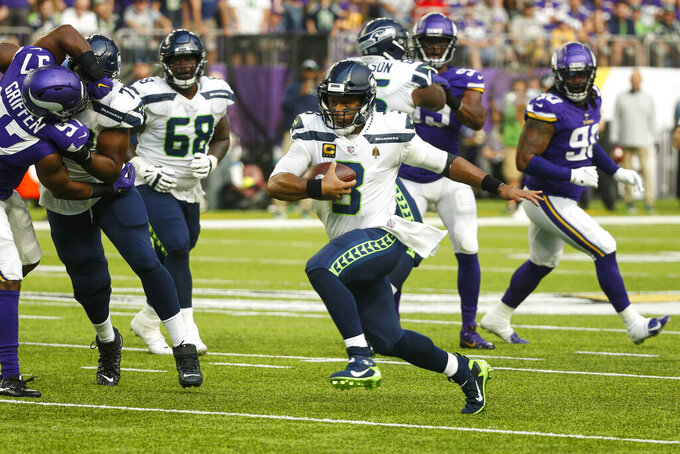 Seattle Seahawks quarterback Russell Wilson (3) runs against the Minnesota Vikings in the first half of an NFL football game in Minneapolis, Sunday, Sept. 26, 2021. (AP Photo/Bruce Kluckhohn)

OPENING LINE: 49ers by 2 1/2, according to FanDuel SportsBook.

TURNOVER DIFFERENTIAL: Seahawks plus-1; 49ers minus-3.

SEAHAWKS PLAYERS TO WATCH: CBs Tre Flowers and D.J. Reed. Cornerback was the biggest concern with the Seahawks entering the season and that worry hasn’t gone away, leaving fans angry and Seattle with limited options. Reed and Flowers have for the most part avoided the sin in coach Pete Carroll’s eyes of getting beaten over the top by wide receivers. But they’ve given up significant yards on underneath throws that have allowed sustained drives by opponents. If Seattle makes a change it would likely turn to Sidney Jones IV, Bless Austin or John Reid.

49ERS PLAYER TO WATCH: TE George Kittle. Kittle was a big part of the passing offense once again last week with seven catches for 92 yards after catching just eight balls for 95 yards in the first two weeks.

KEY INJURIES: Seattle WR Dee Eskridge is expected to return after missing the past two games with a concussion suffered in Week 1. Eskridge was a key piece of Seattle’s offense both as a runner and receiver in the opener against Indianapolis. ... Seahawks pass rusher Benson Mayowa (neck) should play after being a scratch last week. ... The 49ers will be without slot CB K'Waun Williams (calf) and could also be missing CB Josh Norman (chest). ... San Francisco RB Elijah Mitchell (shoulder) missed last week's game and his status is up in the air this week.

SERIES NOTES: The Seahawks have won 13 of the past 15 meetings, including a sweep in the season series in 2020. ... Four of the past five meetings have been decided by five points or fewer. ... Seattle QB Russell Wilson has beaten San Francisco 15 times in his career, including a playoff win, and has 33 TD passes against the Niners. Only Hall of Famer Johnny Unitas has more with 17 wins and 40 TD passes. ... Seahawks coach Pete Carroll's 17 wins against the 49ers are the most by any coach.

STATS AND STUFF: Seattle leads the NFL with 62 points in the first half and is last with 13 in the second half. ... Wilson needs one win to become just the second quarterback in league history with 100 or more regular-season victories in his first 10 seasons. Peyton Manning (105 wins) is the other. ... K Jason Myers had his franchise record streak of 37 consecutive field goals made snapped last week against Minnesota when he missed from 44 yards. ... The Seahawks rank 26th in the league in completion rate allowed (70.7%), 26th in passer rating allowed (108.4) and are one of four teams without an INT. ... The 49ers are the first team since the NFL merger to get their first 11 TDs in a season from 11 different players, according to Elias Sports Bureau. ... San Francisco hasn't allowed a 100-yard rusher in 23 straight regular-season games, the longest active streak in the NFL. ... Niners rookie QB Trey Lance has played seven offensive snaps in a situational role and has thrown for a TD and rushed for one. ... San Francisco DE Nick Bosa has three sacks and five tackles for loss. ... The Niners' 24 points in the final 2 minutes of the first half are the most in the NFL.

FANTASY TIP: Seattle RB Chris Carson has three TDs the past two weeks and averaged 6.7 yards on 12 carries in the loss at the Vikings. If the Seahawks can avoid falling behind, Carson should have plenty of opportunities against San Francisco.