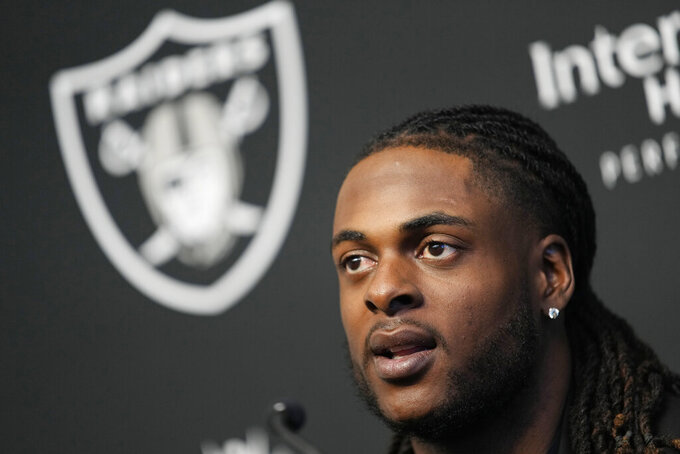 LAS VEGAS (AP) — Davante Adams’ third-grade yearbook photo was taken in a Charles Woodson jersey, while the caption that accompanied it expressed his wish to be an NFL or NBA star.

Growing up in East Palo Alto, he emulated former Raider greats Jerry Rice and Randy Moss, and wore a Tim Brown jersey until the numbers fell off.

Now it’s Adams' turn to wear the Silver and Black.

“It is a dream to be a Raider,” the 29-year-old Adams said Tuesday during his introductory news conference at the Raiders’ facility. “It’s been documented forever, so I guess you could say it was meant to be.”

Adams, who signed a five-year contract worth a reported $141.25 million to make him the highest-paid receiver in the NFL, gives his former college quarterback Derek Carr the top target he’s been missing. Largely recognized as the game’s most productive receiver, the ninth-year pro had 123 catches for 1,553 yards and 11 TDs last season, when he made his second straight All-Pro team.

Once the season was over, Adams said he and Carr allowed themselves to decompress from campaigns that both ended after one playoff game before entertaining the conversation of reuniting for the first time since starring together at Fresno State.

“Something that we were definitely looking forward to, potentially doing down the road,” said Adams, who played two seasons with Carr at Fresno State, where he had 131 catches for 1,719 yards and 24 TDs in their final campaign together in 2013. “Once we got to a point where it was something that could be realistic, not just a thought, we started trying to put a little bit of a plan together.”

Las Vegas had been seeking a top wideout ever since Henry Ruggs III was released last season after he was charged in a fatal crash that killed a woman and her dog.

Carr’s history with Adams brings built-in chemistry to an offense that ranked sixth in the NFL last season with 4,567 yards passing but tied for 16th with 23 touchdowns through the air.

“I’m looking forward to that,” said Adams, whose 432 catches, 5,310 yards receiving, and 47 TD receptions lead the NFL over the past four seasons. “I was looking at some film, and looking at some highlights, and just seeing some of the guys that I’m gonna be surrounded with now.”

Adams also understands his inclusion in the lineup means either he or Waller will see plenty of double teams, leaving ample opportunities for Carr to find an open target.

“Pick your poison and it’ll be anybody’s day,” said Adams, the only player in NFL history to have at least 110 catches, 1,350 yards receiving and 11 touchdown receptions in three separate seasons. “I’m a secure wide receiver, so at the end of the day I know what I bring. I told Derek, ‘Don’t feel any pressure to force me the ball ... let’s just go out there and do this thing like we did before.’ Put together a pretty good resume in college together. This ain’t college but we still got that connection. Looking forward to putting it on display.”

NOTES: The Raiders announced they signed free agent tight end Jacob Hollister on Tuesday. Hollister has had stints with the Jacksonville Jaguars (2021), Seattle Seahawks (2019-20), and New England Patriots (2017-18). He has appeared in 57 games with 12 starts over his five-year career, totaling 83 receptions for 707 yards with seven touchdowns. ... The Raiders also signed DT Kyle Peko, who has played 21 career games for Denver, Buffalo and Tennessee.