Analysis: No call in sports is above being picked apart 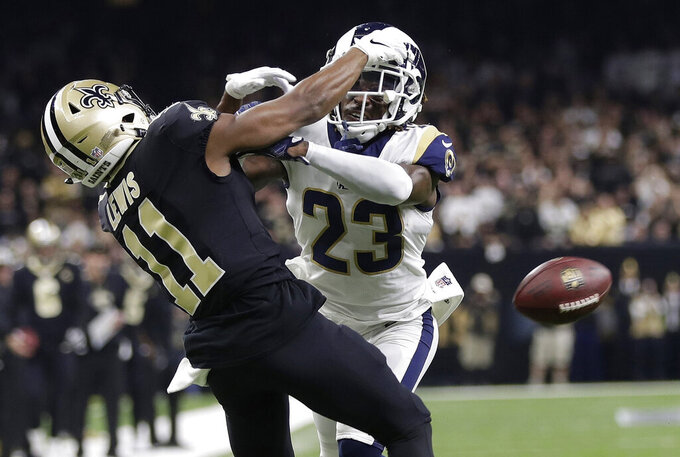 FILE - In this Jan. 20, 2019, file photo, Los Angeles Rams' Nickell Robey-Coleman breaks up a pass intended for New Orleans Saints' Tommylee Lewis during the second half of the NFL football NFC championship game in New Orleans. The non-call on the play involving Rams Nickell Robey-Coleman in the NFC championship game cost the Saints a trip to the Super Bowl. (Or, at least that's how they see it in New Orleans) After taking tons of flak, then admitting the call was wrong, but doing nothing to alter the outcome of the game, the NFL rule-makers met a few months later and declared pass interference would now be reviewable.(AP Photo/Gerald Herbert, File)

The replays stream onto our sets in high-definition on a practically endless loop, with no detail too small, or too big, to ignore: fingernails nicking basketballs, horses veering out of line, baseball gloves grazing runners as they slide into second.

About the only irrefutable evidence to come from any of it is that nobody agrees on what they saw.

Instead of offering clarity, technology has transformed the sports we watch into fodder for a nonstop debate, while the growingly divisive American culture these sports are part of has handcuffed the country's ability to find common ground in the aftermath of the calls.

What used to be one of society's great distractions has become simply another cog in the spin cycle. What used to be the domain of talk radio has now found a home on the president's Twitter account.

Social media, endless cable talk programs and the lack of any "neutral" arbiter for any of it has turned some of our debates about sports officiating as toxic as those about politics.

"In this world of the internet and the 24-hour news cycle, it's the ways we take opinion and exacerbate that opinion and elevate anyone who shares those opinions into a sort of sainthood if we agree with that opinion," said Dan Lebowitz, the executive director for Northeastern's Center for the Study of Sport in Society. "We've gotten ourselves into a little bit of a conundrum. What do we accept as truth? Truth about the call, or truth about the White House or truth about anything else?"

These days, every call is vulnerable to spin.

Every whistle is subject to its own facts — along with a set of alternative facts and potential conspiracy theories.

Given the information overload brought on by replay — a piece of technology developed to eliminate officiating errors — it follows that somebody must be right, and wrong, about every close call. Pick a side, either side. There is less room — if any — for shades of gray.

"When political leaders are saying that the system is rigged and question the fundamental fairness of the institutions that are at the core of our society," said NBA commissioner Adam Silver, "then I don't think anybody should be surprised that people come into the arena and look at yet another long-term institution, the NBA, and say this must not be on the level, either."

A number of close games during this spring's NBA playoffs have hinged on one or two potentially game-changing calls that have been subject to replay, with no definitive conclusion as to exactly what happened, or what should've been done about it.

The issue came into sharp focus when the Houston Rockets, after a close loss to Golden State filled with tough calls in Game 1 of the Western Conference semifinals, said they had conducted a report about last year's Game 7 loss to the Warriors in the conference finals. The report concluded there were 81 calls and non-calls that cost them the game and, thus, the series.

The study underscored a long-standing reality of replay in all sports: Only some, not all, plays are reviewable. Many of those come at the end of games.

Does the "right" team end up winning these games? That's subject to many different interpretations.

"I don't think anyone wakes up and says, 'We're going to rig the system,'" said Bob Malekoff, who studies sports' role in society at University of North Carolina. "But people are human, and decisions and calls get made that not everyone gets. And it's totally natural to see what goes on in Washington or other parts of the world and look at something that happens in sports, and say, 'Well, that's just the way the world works.'"

The NBA isn't the only league that gets caught up into this kind of thinking.

Last weekend, the winner of America's biggest horse race was decided by an historic judgment call.

Replay clearly shows the horse that finished first in the Kentucky Derby, Maximum Security, veering into the path of others. A 22-minute "inquiry" into the matter resulted in the scrubbing of Maximum Security's victory. Horse racing, the sport that essentially invented the use of cameras to adjudicate results on the track (the photo finish dates to the 1930s), found itself thrust into a less-than-civil conversation about rulebooks, fairness and officiating — bitten by the very technology it helped create.

The reaction was, not surprisingly, virtually void of gray area .

—President Donald Trump on Twitter: "The Kentucky Derby decision was not a good one."

—Maximum Security's owners appealed the decision and said they wouldn't run their horse in the second leg of the Triple Crown, the Preakness.

—The sports-punditry class — a group that turned its back to horse racing much as America has over the past several decades — suddenly became experts on the sport and was obliged to take a side.

—And then, the inevitable second-day, "fresh-take" game started, and went something like this: "It's really the fault of Churchill Downs for crowding the track with too many horses." Never mind that that's been going on for decades and nobody has paid much attention.

Only a month earlier, back on the hardwood, two sequences helped define the Final Four. The first was the last-second foul called on Auburn in the national semifinal that sent Virginia's Kyle Guy to the free throw line, where he made all three shots to lift the Cavaliers to a one-point win.

The question posed on Deadspin that night: "Is it worth it to trade instantaneous, wholly satisfying, and functionally correct calls for long, momentum killing delays, and endless replays of a second or two of action for the sake of a tyrannical "accuracy" that is only possible by consulting the machines?"

It didn't take a machine, however, to parse through the very worst call of 2019. The non-call on the play involving Los Angeles Rams defender Nickell Robey-Coleman in the NFC championship game cost the New Orleans Saints a trip to the Super Bowl. (Or, at least that's how they see it in New Orleans.)

After taking tons of flak, then admitting the call was wrong, but doing nothing to alter the outcome of the game, the NFL rule-makers met a few months later and declared pass interference would now be reviewable . It's a move that will open up a host of unintended consequences — the latest bit of rulebook gymnastics that attempts to bypass the one explanation that seemingly no one wants to hear anymore: The ref made a mistake.

"Now, no one believes human failure is human failure anymore," Lebowitz said. "It's got to be a conspiracy, or whatever people want to believe. It makes the officiating job incredibly difficult, and it's already difficult to begin with."