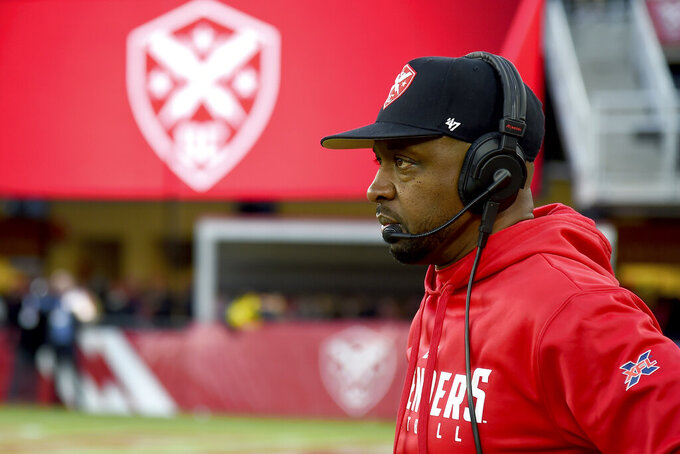 FILE - In this Feb. 8, 2020, file photo, DC Defenders head coach Pep Hamilton looks on during an XFL football game against the Seattle Dragons in Washington. The Los Angeles Chargers are hiring Hamilton as quarterbacks coach, a person familiar with the negotiations told The Associated Press. The person spoke Thursday, April 30, 2020, on condition of anonymity because the deal, first reported by The Athletic, has not been officially announced by the team. (AP Photo/Will Newton, File)

The person spoke Thursday on condition of anonymity because the deal, first reported by The Athletic, has not been officially announced by the team.

Hamilton was head coach of the XFL's DC Defenders before the league ended its season after five weeks due to the coronavirus pandemic. The XFL announced a couple of weeks later that it was suspending operations. Prior to joining the XFL, Hamilton was Michigan's assistant head coach and passing game coordinator in 2017-18.

Hamilton's last NFL job was in Cleveland as assistant head coach and quarterbacks coach in 2016. He was also Indianapolis' offensive coordinator for three seasons (2013-15) along with previous stints with the New York Jets, San Francisco, Chicago and at Stanford.

He moves into the spot previously occupied by Shane Steichen, who was promoted to offensive coordinator. The Chargers will have a new quarterback for the first time in 14 seasons after Philip Rivers signed with Indianapolis. Tyrod Taylor is in the driver's seat but Los Angeles also drafted Justin Herbert with the sixth overall pick in last week's draft.

The Chargers announced they have exercised their fifth-year option on Mike Williams. The wide receiver — who was the seventh overall pick in the 2017 draft — posted his first 1,000-yard season last year with 49 receptions for 1,001 yards.

Williams had seven straight games with a reception of at least 39 yards, which tied with Denver's Anthony Miller in 1994 for the longest such streak since 1948. He averaged 20.4 yards per catch, which led the league.