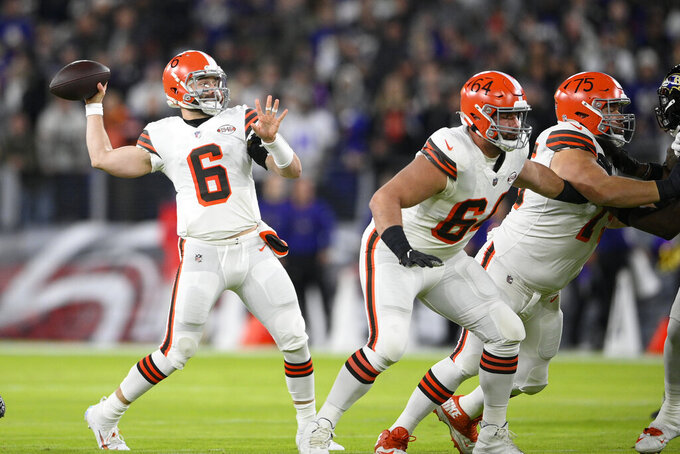 With a surge of COVID-19 cases threatening to disrupt the NFL season last week, the league discussed canceling games for the first time since the pandemic began.

In talks with the NFL Players Association, canceling games involving Washington, Cleveland and the Los Angeles Rams was considered because of coronavirus outbreaks on each team. Instead, the games were moved from the weekend to Monday and Tuesday.

NFLPA President JC Tretter, a center for the Browns, said the NFL wanted to cancel those games — players would not have been paid in that scenario, according to the league's COVID-19 protocols agreement with the union last season. But two player reps with knowledge of the discussions told The Associated Press canceling the games was never the No. 1 plan. Both reps spoke to the AP on condition of anonymity because they weren’t authorized to discuss the conversations.

NFL spokesman Brian McCarthy told the AP on Wednesday: "Our goal has been to play the season as scheduled in a safe, responsible way.”

Speaking on a conference call with reporters, Tretter stressed the union's opposition to any cancellations.

“So, the NFL’s position last week was that those three games were going to be canceled," Tretter said Wednesday. “They weren’t going to be played, and if they weren’t played then nobody on either team was going to be paid. That’s obviously an issue for us as a union. Over 18% of our player population was at risk of not getting paid last week. Our position was we need to make sure all games are played in order for our guys to get paid.”

Tretter said the union's executive committee voted unanimously "that our position needed to be that games need to be rescheduled and not canceled and we pushed the league to that resolution.”

The Raiders at Browns game was moved from Saturday to Monday, with Las Vegas winning. Seattle at the Rams and Washington at the Eagles went from Sunday to Tuesday night, with Los Angeles and Philadelphia winning.

Pittsburgh Steelers quarterback Ben Roethlisberger is focused on the games and not when they will be played.

“From what I knew, in the conversations that I had with people from the league they were not thinking about canceling games," he said. "They were trying every way to not do that. I’m sure that the discussion was out there for a short time, but they really did everything they could to make the games happen.”

Last season, in the heart of the coronavirus pandemic and before vaccines were available, the NFL managed to complete its entire schedule, the playoffs and Super Bowl on time. However, that required rescheduling 15 games because of COVID-19 outbreaks on various teams.