Beasley enjoying move to Buffalo after 7 years in Dallas 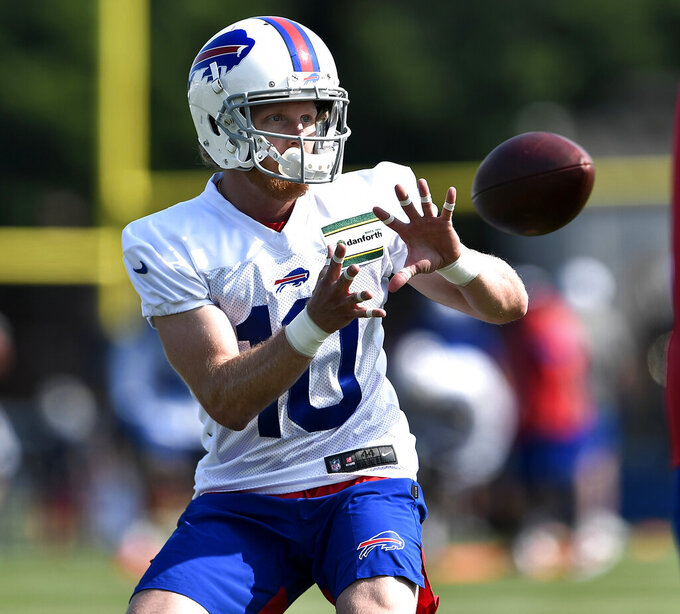 FILE - In this July 25, 2019, file photo, Buffalo Bills wide receiver Cole Beasley catches a pass during practice at the NFL football team's training camp in Pittsford, N.Y. In Buffalo, Beasley is being asked to play a central role in what had been a patchwork offense that underwent a major overhaul in free agency this offseason. (AP Photo/Adrian Kraus, File)

PITTSFORD, N.Y. (AP) — Seven seasons with the Cowboys left Cole Beasley wondering what the big deal was in Dallas.

The slot receiver is, so far, finding things are much better in Buffalo.

"It's the most fun I've had playing football in a long, long time, man. Since high school," the 30-year-old said following a recent practice at the Bills' training camp site in suburban Rochester, New York.

And the main reason for that is it's not Dallas, where Beasley said he felt overlooked while battling to keep his spot in the pecking order on a team which relied more on big-play receivers, such as Dez Bryant, and workhorse running backs, such as Ezekiel Elliott.

"I really feel like it's a respect thing," he said. "I felt like in Dallas, it was always an uphill battle trying to fight to get them to respect me."

It made no difference whether he established himself as one of the NFL's most dependable third-down targets, or he helped the Cowboys to a 13-3 record in 2016 with a team-leading and career-best 833 yards receiving.

"I always wanted more there, and they were just like, 'We don't do that,'" Beasley added. "That's why I think maybe it's more fun now, and I can just play free and don't have to worry. I'm right where I want to be."

In Buffalo, the 5-foot-8 undrafted player out of Southern Methodist is being asked to play a central role in what had been a patchwork offense that underwent a major overhaul in free agency this offseason. Aside from signing Beasley to a four-year, $29 million contract, the Bills also signed speedster John Brown, tight end Tyler Kroft, running back Frank Gore, and retooled their offensive line by signing six new players.

The objective was upgrading a unit that finished 30th in the NFL in yards gained and points scored, and help spur quarterback Josh Allen's development entering his second season.

Beasley was also intrigued to work with Bills offensive coordinator Brian Daboll, who appreciates the importance of the slot receiver after having previously worked with Julian Edelman and Wes Welker in New England.

"I can just see it in the routes he'll let me run. And if I mess up, he's like, 'I know you'll get it. Don't worry about it,'" Beasley said of Daboll. "He gives me that time to develop. Only a coach who really believes in you is going to let you do that."

There have been signs of Buffalo's passing attack starting to click with Beasley and Brown's presence.

On the third day of camp, Allen torched the Bills defense by making several long completions to Brown.

The next day, with top cornerback Tre'Davious White shadowing Brown, Allen turned his attention to Beasley, who made numerous short catches over the middle.

The two can also make it difficult for defenses in the red zone because of their shifty ability to break off the line and find an opening.

"I feed off Cole and he feeds off me," said Brown, who noted he's learning more about playing in the slot from Beasley.

The way the two complement each other was enough for running back LeSean McCoy to break his camp-long silence with the media.

"The thing with them is pick your poison," McCoy told The Associated Press, before comparing the two to his former Eagles teammates DeSean Jackson and Jeremy Maclin.

"It's like my old Philly days with having that elusive guy and having that speed guy outside," he said. "I was telling Beasley, joking with him, and said, 'You guys will really help out the run game.'"

Asked by how much, McCoy winked and said: "Wooo! You'll see. You're going to see, baby."

That would be a plus considering the 31-year-old McCoy is coming off his least productive season.

Looking back, Beasley felt constrained in Dallas for various reasons, including the pressures of playing for so-called "America's Team."

"It's like so much weight is on every single play," he said in comparing the Cowboys to the Bills. "I just feel more free when I'm playing. It's just back to football. I don't feel I have to go above and beyond just to prove myself."

"He was a big priority. A lot of what we tried to do was built around his strengths and what he did well," said the tight end, who is returning to play for Dallas after spending last year in broadcasting. "I get it. Any time these things happen, all of us want the ball. All competitors do. No hard feelings on our end. We wish him nothing but the best."

Beasley has occasionally enjoyed engaging on social media with Cowboys fans questioning his decision to leave Dallas for Buffalo.

Beasley responded by writing: "Was at the cowboys for 7 years. We didn't win either. I'll be alright."