Bengals and Lions match up after losing games on field goals 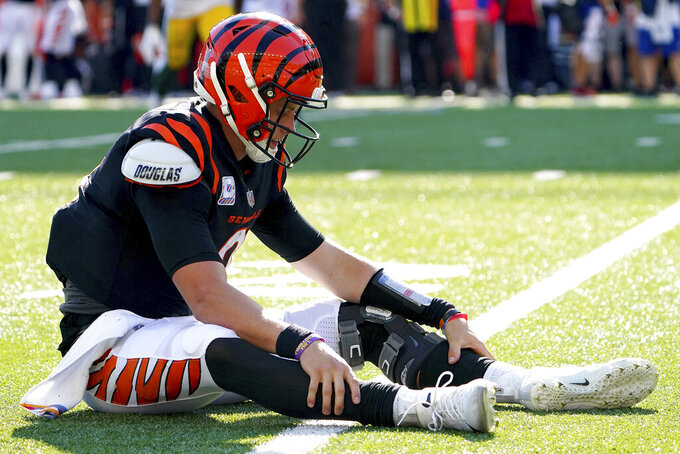 TURNOVER DIFFERENTIAL: Cincinnati minus-2; Detroit minus-1.

BENGALS PLAYER TO WATCH: QB Joe Burrow is expected to play after getting hit in the throat and making a precautionary trip to the hospital after last week’s loss. Burrow is also playing on a surgically repaired left knee. The No. 1 overall pick from the 2020 draft has been sacked 14 times this season and an average of three times per game over his 15-game career.

LIONS PLAYER TO WATCH: LB Charles Harris said he's playing his best football, and can validate the assertion with a career-high four sacks. Miami drafted him out of Missouri with the No. 22 pick overall in 2017 and he had three sacks in three seasons with the Dolphins. Harris had three sacks in 13 games, including one start, last year in Atlanta.

KEY MATCHUP: Detroit's running game against Cincinnati's defense. The Lions will likely have to run the ball effectively with D'Andre Swift and Jamaal Williams to have a shot to win. That will be a challenge against a unit that gives up just 101.4 yards rushing per game.

KEY INJURIES: The Bengals say Burrow's throat is OK, adding he didn’t talk to the media Wednesday to rest his voice. ... Starting S Jessie Bates is expected to play after leaving last week's game following a collision. ... Cincinnati put two players on the COVID-19 list: G Jackson Carman, who started three games this season, and RB Samaje Perine, who had a season-high 83 yards of offense and a TD last week. ... CB Trae Waynes (hamstring) was put on IR. ... Lions LT Taylor Decker practiced Wednesday, taking a step toward recovering from a finger injury and playing for the first time this season. ... C Frank Ragnow had season-ending toe surgery and WR Quintez Cephus (broken collarbone) went on injured reserve this week.

SERIES NOTES: Cincinnati has won the past six matchups, including the last visit to Detroit in 2013, and has won 75% overall for its best winning percentage against an opponent. ... The Lions' last win in the series was in 1992, the season after the franchise earned its only postseason victory since winning the 1957 NFL title.

STATS AND STUFF: Both teams lost last week on a game-ending field goal. Mason Crosby lifted Green Bay to a win in OT with a 49-yard kick after he and Cincinnati's Evan McPherson combined to miss six kicks. Minnesota's Greg Joseph made a 54-yard field goal with no time left against Detroit, which became the first NFL team to lose two games in the same year on game-winning kicks of 50-plus yards with no time left on the clock. Baltimore’s Justin Tucker hit a league-record, 66-yard field goal against the Lions in Week 3. ... In AP’s Pro32 NFL Power Rankings, the Bengals are No. 13 and Detroit is No. 31 and ahead of only Jacksonville. ... The Bengals are a win away from matching last year's total and doubling their number of victories in 2019 during coach Zac Taylor's debut season. ... Burrow plays with six players who were teammates at Ohio State or LSU. ... Cincinnati has scored on 80% of drives in the red zone, ranking third in the NFL. ... Rookie WR Ja'Marr Chase had six receptions, including a TD, for a career-high 159 yards last week. Chase is one of five rookies in league history to have 50-plus yards receiving in each of his first five games. ... DE Trey Hendrickson had a two sacks last week after he had 2 1/2 sacks over the first four games. ... LB Logan Wilson has three INTs, leading the league at his position. ... Detroit has lost nine straight, dating to last season's win at Chicago on Dec. 6, 2020. ... When Lions coach Dan Campbell was an interim coach in Miami in 2015, Taylor was the offensive coordinator and the defensive coordinator was Lou Anarumo, who currently leads the Bengals' defense. ... Swift leads all NFL RBs with 29 receptions, ranks second with 252 yards receiving and had 104 yards from scrimmage last week. ... Rookie WR Amon-Ra St. Brown had a career-high seven receptions last week and has had six-plus catches for 60-plus yards in each of the past two games. ... CB Amani Oruwariye had a career-high nine tackles at Minnesota.