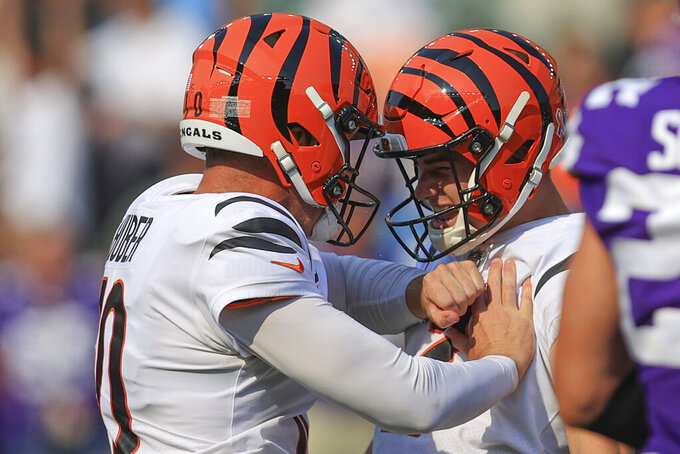 CINCINNATI (AP) — The Cincinnati Bengals needed some breaks to go their way in an overtime thriller against Minnesota.

The hard-luck Bengals got few of them last season. So they can't help but feel they've turned some kind of corner after outlasting the Vikings 27-24 on Sunday.

“I don’t think we win that game last year,” said quarterback Joe Burrow after Cincinnati kicker Evan McPherson booted a 33-yard field goal as time expired in overtime. ”I think that’s the difference this year, we have resilient guys who know how to win."

The Bengals also have Burrow back. His knee was injured in Week 11 last season and needed major reconstructive surgery, but he displayed no hesitation or ill effects Sunday, even after being sacked five times by the Vikings.

But back to those breaks. The Vikings hurt themselves with penalties early, then came charging back to tie the game with a field goal as time ran out in regulation.

In overtime, Minnesota's running back Dalvin Cook allowed the ball to be taken away by safety Jessie Bates, and Bengals linebacker Germaine Pratt recovered — the only turnover for either team the entire game.

Next came a gutsy call by Burrow that clicked. With the Bengals facing fourth-and-inches on their 48, Burrow checked out of a planned quarterback sneak and lofted a perfect ball to streaking tight end C.J. Uzomah for a 32-yard gain.

McPherson, the rookie from Florida, took it from there.

“It’s the expectation — we have Joe Burrow at quarterback, a real quarterback," said receiver Ja'Marr Chase, who shared glory with Burrow when both were stars on LSU's national championship team. “We have nothing to do but lean on Joe, Joe tells us what to do, and we lean on him.”

To start, the quarterback whose nickname among teammates is “Franchise” seems to be fine after nine months of rigorous rehab from knee surgery. He was 20 for 27 for 261 yards and two touchdowns.

No. 1 running back Joe Mixon, recovered from a foot injury that kept him out for much of last season, rushed for 127 hard yards and a touchdown, averaging 4.4 yards a carry.

It sounds like a broken record. The offensive line, horrible for the past few years, got a makeover but still had its struggles. Burrow went down five times and was hit way too often for the comfort of anyone on the Cincinnati sideline.

Chase, who struggled catching passes in the preseason, held on to everything Burrow threw at him, including a 50-yard touchdown toss near the end of the first half. He caught five passes for 101 yards, an average of 20.2 yards per catch.

Cornerback Eli Apple, starting in place of the injured Trae Waynes, was exploited often by the Vikings. He missed a tackle on Justin Jefferson that allowed a big gain, got called for holding and was beaten in coverage on a Minnesota touchdown.

Nothing significant reported. Burrow got up holding his shoulder after one hit but didn't miss a play and said after the game he was fine.

2: That's how many field-goal chances rookie kicker McPherson got, and that's how many he converted, including the 33-yarder for the OT win. His first NFL field goal was a 53-yarder in the fourth quarter that might have been good from 63 or more. He was carried off the field on his teammates' shoulders after the game-winning kick.

Just like always, the O-line has to work on keeping Burrow upright. The line is improved with former Viking Riley Reiff aboard and a healthy Jonah Williams, but keeping the quarterback healthy is a work in progress. Riding high from the opening victory at home, Cincinnati travels to Chicago next Sunday. The Bears lost their opener 34-14 to the Los Angeles Rams.

“This is a new team, this is a new locker room, a new culture that that we're building in there that everyone's buying into," Uzomah said. “It's always a good thing to notch the first one (in) your belt.”