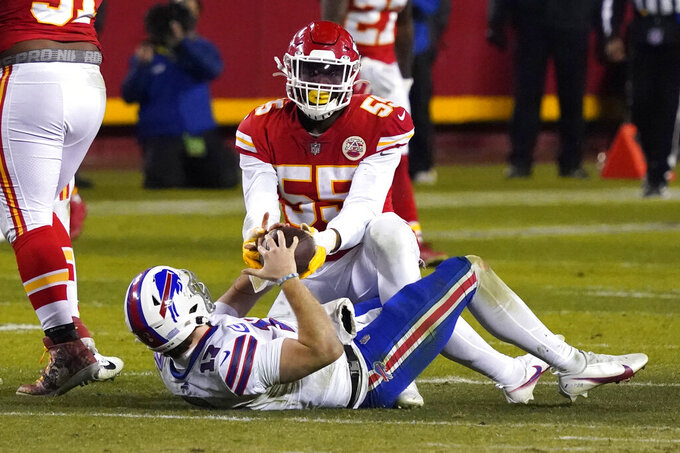 Josh Allen played a huge role in getting the Buffalo Bills to their first AFC championship game in 27 years.

The third-year starter was the first to acknowledge he needs to be much better for the Bills to take the next step.

“It’s going to fuel us. I have no doubt in my mind that we will be back,” Allen said after the Bills were outclassed in a 38-24 loss to the Kansas City Chiefs on Sunday night.

“We’re still young, and we’re only going to get better,” he added. “That’s the one thing I take from this. We’re close.”

In a season the Bills (15-4) busted numerous slumps by sweeping the New England Patriots for the first time since 1999, and claimed their first division title in 25 years, Allen and Co. were reminded of how far they still have to go in losing to the defending Super Bowl champions.

Buffalo’s bend-but-don’t-break defense wilted, squandering a 9-0 lead by giving up three touchdowns over the span of 10:04 in the second quarter. And Allen simply couldn’t keep up.

After scoring their first touchdown set up by Taiwan Jones recovering Mecole Hardman’s muffed punt at the Kansas City 3, the Bills settled for field goals on three drives inside the Chiefs 35. The game was essentially over when Allen, facing second-and-10 at the Kansas City 20, was picked off by Rashad Fenton two minutes into the fourth quarter.

Allen finished 28 of 48 for 287 yards with two touchdowns and essentially was intercepted twice, one coming on a desperation 2-point attempt with 4:08 remaining.

The Bills could also be second guessed for settling for field goals in a game they needed touchdowns.

It happened at the end of the first half, when Tyler Bass hit a 20-yard field goal to cut the Chiefs' lead to 21-12 rather than go on fourth-and-goal from the 2 with 14 seconds left. And it happened again on Buffalo’s opening drive of the third quarter, which ended with Bass hitting a 27-yarder on fourth-and-3 from the Chiefs 8.

“That’s coach’s decision,” Allen said. “We had three downs to get in there prior and didn’t do our job. Lack of communication, lack of execution down there falls on my shoulders.”

Coach Sean McDermott acknowledged he considered going for it on fourth down.

“Maybe if I had to do it over again I would’ve gone for one of them,” he said. “We were having trouble coming up with points. I wanted to at least have something to show for it going into the half.”

Buffalo’s defense didn’t help, unable to solve the Chiefs for a second time this season. In Week 6, the Bills were trampled in a 26-17 loss in Week 6 in a game rookie Clyde Edwards-Helaire had 161 yards rushing.

On Sunday, they were carved up by Mahomes, who finished 29 of 38 for 325 yards and three touchdowns. The Chiefs found their rhythm with Mahomes overseeing scoring drives on six consecutive possessions spanning the first half, not including a kneel-down to end the second quarter.

Travis Kelce caught 13 of 15 passes thrown his way for 118 yards and two touchdowns. Tyreek Hill exposed the Bills' tackling deficiencies by catching mostly short passes in the flats and zig-zagging away from defenders in finishing with nine catches for 172 yards.

Hill’s 172 yards receiving were the most given up by Buffalo in the postseason, while Kelce now ranks fourth on that list.

“We tried to stop the run, and they’ve got guys on the outside, 87 and 10, who can kill you,” safety Micah Hyde said, referring to Kelce and Hill. “We feel like we came in with a good game plan and then we just couldn’t stop the bleeding once they started going.”

The Chiefs punted just once in a game they finished with 29 first downs, the most Buffalo has allowed this season.

Missing from the defense were the clutch plays the Bills made in securing their previous two playoff victories.

Hyde sealed a 27-24 victory over Indianapolis in the wild-card round by batting down Philip Rivers' desperation heave into the end zone as time ran out. Last week, in a 17-3 win over Baltimore, Taron Johnson returned Lamar Jackson’s interception for an NFL playoff record-matching 101 yards touchdown return.

The Bills had an eight-game winning streak snapped and lost for just the second time in 13 games.

Buffalo fell a win short of returning to the Super Bowl for the first time since the run of four straight appearances — and losses — ended in 1994.

On the bright side, the Bills made tremendous strides over last season, which ended with Buffalo squandering a 16-0 third-quarter lead in a wild-card playoff loss at Houston.

Buffalo matched a regular-season franchise record with 13 wins set in both 1990 and ’91, and scored 501 points with Allen enjoying a breakout season. The third-year starter set numerous team passing and scoring marks in finishing with 4,544 yards passing, 37 TDs passing and 46 overall (including one receiving).

What’s more encouraging is the Bills have many of their core players on both sides of the ball under contract going into next season. Expectations are the team is being built for a lengthy run of success.

Pro Football Hall of Fame defensive end Bruce Smith made such a suggestion last week, telling The Associated Press that win or lose, this “is just the beginning” for his former team.

“This is a learning experience for us,” McDermott said. “We had a great season and came up a little short tonight. That’s a great football team on the other side.”