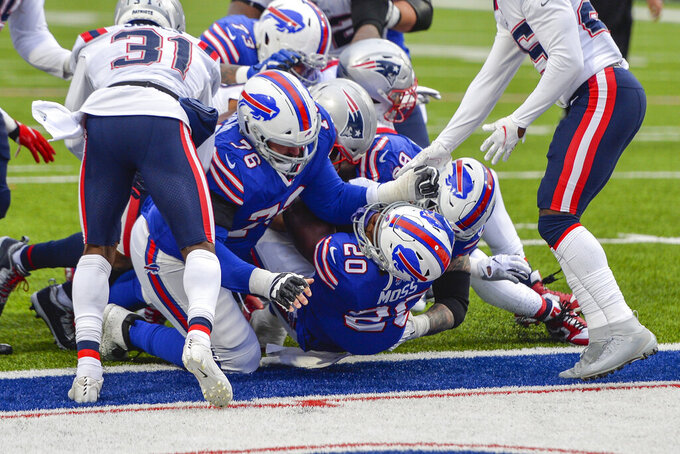 Buffalo Bills running back Zack Moss (20) rushes for a touchdown during the second half of an NFL football game against the New England Patriots Sunday, Nov. 1, 2020, in Orchard Park, N.Y. (AP Photo/Adrian Kraus)

ORCHARD PARK, N.Y. (AP) — The Buffalo Bills were finally able to “ground” out a win this season.

Though the 24-21 win on Sunday wasn’t decided until backup defensive lineman Justin Zimmer forced Patriots quarterback Cam Newton’s fumble at the Bills 13 with 31 seconds remaining, Buffalo wouldn’t have been in a position to beat New England for the first time at home since 2011 if not for its ability to run the ball.

Devin Singletary led with 86 yards rushing and rookie Zack Moss added 81 and scored twice in becoming just the NFL’s third running back tandem to top 80 yards each in one game. And the AFC East-leading Bills (6-2) combined for a season-best 190 yards rushing in outpacing the passing attack (154 yards) for just the third time in Allen’s two-plus seasons.

“Enough was enough,” left tackle Dion Dawkins said, referring to fielding near weekly questions about the pedestrian state of the Bills' ground game. “We made a statement to run the ball today.”

The emphasis on running the ball was evident during a 10-play, 78-yard game-opening scoring drive, which Moss set up with a 21-yard run followed by an 8-yard touchdown scamper. Moss also capped a second-half-opening scoring drive with a 4-yard run in which he was initially stopped for no gain before getting a hefty push from behind by offensive linemen Brian Winters and Jon Feliciano.

The 190 yards rushing were the most since the Bills gained 224 in a 20-3 win over Denver on Nov. 24, and nearly double the 97 yards they averaged through their first seven games.

The weather, which traditionally turns nasty come November at home, played a role, too.

“You see what happens when we have good games like that on the ground, especially in a typical AFC weather game like this,” said Allen, who also scored on a 2-yard run. “We needed it, and our guys responded.”

A more balanced attack would also keeping opposing offenses off the field and benefit a defense still battling inconsistencies.

Buffalo has allowed 21 or more points six times already this season, after doing so just four times last year, and has particularly struggled in stopping the run after allowing 188 to the Patriots.

A run defense which has allowed 150 or more yards rushing three times already, after doing so just once last year.

Feliciano showed how valuable he is to the offensive line. In making his season debut since having surgery to repair a torn pectoral muscle in July, Feliciano started at left guard before taking over at center after Mitch Morse sustained a concussion on the third play from scrimmage.

Rookie receiver Gabriel Davis had a pass float through his arms in the end zone on third-and-5 from New England’s 10 with the game tied at 21 and 4:16 remaining. The Bills settled for Tyler Bass hitting a 28-yard field goal.

Morse's status is uncertain after he was placed in concussion protocol. It's the sixth-year player's fifth documented concussion and happened after he bumped helmets with Winters while run blocking. ... Linebacker Matt Milano was limited to 15 snaps while still being bothered by a partially torn pectoral muscle that forced him to miss two games.

7 — The differential in first-downs rushing (14) versus passing (seven), which was the largest margin since Buffalo had 12 rushing first downs and three passing in a 23-3 loss to New England on Dec. 3, 2017.

Russell Wilson and Seattle Seahawks hit town as the Bills enter a stretch of facing three NFC West opponents over their next four outings.