Bills' victory was Allen's way of honoring his grandmother 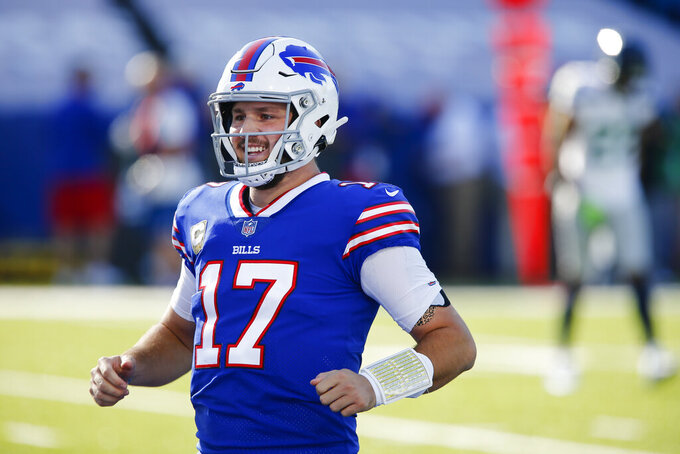 Buffalo Bills quarterback Josh Allen (17) smiles after throwing a touchdown pass to Isaiah McKenzie during the first half of an NFL football game against the Seattle Seahawks Sunday, Nov. 8, 2020, in Orchard Park, N.Y. (AP Photo/John Munson)

Josh Allen wasn’t going to let the pain of his grandmother’s sudden death get in the way of him taking the field against the Seattle Seahawks last weekend.

“Grammy,” as the Bills quarterback affectionally called Patricia Allen, wouldn’t have had it any other way.

“All I kept telling myself was she would’ve wanted me to play,” Allen said Wednesday, in his first comments since coach Sean McDermott revealed the news of Allen's 80-year-old grandmother’s death following a 44-34 win on Sunday.

“And she would want me to play how I usually play, with the fun that I have out there, and with the sense of pride I have when I put on that uniform,” Allen said. “That’s all I kept telling myself that I’m doing this for her. I knew she was with me on the field.”

Allen, who would occasionally look to the sky and point during the game, provided a fitting remembrance for a beloved grandmother, who never missed a Bills game either on TV or in person, and attended every one of his high school games in Firebaugh, California.

He finished 31 of 38 for 415 yards passing, matching a career high set in a win over Miami in Week 2, and scored four touchdowns, including one rushing. The outing earned him his second AFC offensive player of the week honor of the season.

It wasn’t until he reached the locker room and saw offensive coordinator Brian Daboll that an emotionally spent Allen collapsed in the coach’s arms and broke down.

“My parents didn’t want to tell me. They didn’t want to burden me with a heavy heart before the game,” Allen said of finding out about the death on Saturday night. “But to go out there and play for her, to do it in her honor, while my family was all together watching, I don’t think it could’ve been a better tribute.”

The quarterback had even more cause to grow emotional. He was awestruck by the outpouring of support the Bills Mafia fanbase showed in topping $300,000 in donations to Allen’s favorite charity, Buffalo’s Oishei Children’s Hospital.

“Words can’t really describe how I feel,” he said. “I can’t thank them enough. It’s overwhelming for sure. So much good is coming out of such a tough situation, you can’t help but smile at it.”

In three years since being drafted in the first round out of Wyoming, Allen is enjoying his full share of what the community likes to call “Buffa-Love.”

Daboll, who grew up in Buffalo's suburbs, wasn’t surprised by how the fanbase has adopted the quarterback as one of its own by noting how Allen’s blue-collar, unpretentious approach fits this rust-belt town.

The support is also a reflection of Allen emerging as the franchise quarterback the Bills have lacked since Hall of Famer Jim Kelly retired following the 1996 season.

Under Allen, the pass-happy, AFC East-leading Bills are 7-2, matching their best record through nine games since 1993. Buffalo, which plays at Arizona (5-3) on Sunday, is in contention to earn its third playoff berth in four years, and win its first division title since 1995.

Allen has captivated the community much like he has his teammates, many of whom didn’t know about his family's loss until after the game.

“He took a moment to put his feelings to the side and put his team first,” receiver Stefon Diggs said. “You’ve got to respect it. You’ve got to love him for that because not a lot of guys could’ve done that.”

For McDermott, Allen’s performance reinforced what the team saw in the raw, strong-armed quarterback who played at Wyoming because it was one of only two Division I schools to offer him a scholarship.

“He’s continued to grow. He’s continued to put in the work, acknowledging that he’s not a finished product,” McDermott said. “Even though he’s experienced success prior to this season, he stays committed to working his tail off to get better and improve.”

Allen joined Drew Bledsoe in 2002 in becoming the second Buffalo player to top 400 yards passing twice in one season. His 2,587 yards passing are 502 short of matching his 16-game total last year. And his current completion percentage of 68.9 represents a 10.1-point jump over last season, when he finished 32nd among NFL starters.

The statistics and awards are secondary, Allen said, though he acknowledged producing them in honor of his grandmother made him feel better. He was more pleased with how Buffalo responded in his time of need.

“It’s truly a special place,” Allen said. “I don’t ever want to leave, obviously. I want to play here for as long as I can, and give back.”

NOTES: CB Tre'Davious White did not practice after hurting his ankle in the final minutes on Sunday. ... CB Josh Norman, who's missed three games with a hamstring injury, was listed as limited in practice. ... C Mitch Morse cleared the NFL's concussion protocol and practiced fully.