Bird is the Word: Jackson and Ravens face Wilson's Seahawks 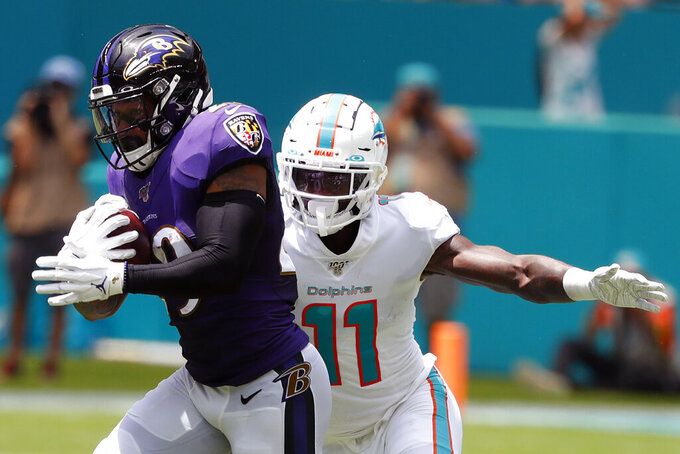 SEATTLE (AP) — There is an understandable mutual admiration between Baltimore's Lamar Jackson and Seattle's Russell Wilson.

In Jackson, Wilson sees a combination of speed and shiftiness working in concert with an underrated passing ability that has the young QB causing headaches for anyone tasked with slowing him down.

In Wilson, Jackson sees a veteran who has reached the pinnacle of the NFL, who has figured out a way to balance his athleticism and running ability with a dynamic right arm that makes him one of the premier passers in the league.

"I love everything about his game," Jackson said. "He's a great quarterback. He makes guys miss. He breaks the pocket, and there will be guys chasing him everywhere. He knows what to do with the ball — dish it out, go to a checkdown. He makes plays. He's a playmaker, and that's what you need in a guy and at the quarterback position. That's what he is."

Jackson and Wilson will meet on the field or the first time on Sunday when the Seahawks host the Ravens in a showdown between two of the better teams in each conference and two of the early MVP candidates.

Jackson is completing 65% of his passes, has 13 touchdowns passing and rushing and causing nightmares for opposing defenses.

"People always mention his speed. That's obvious. But I think the mixture of all the different things he can do — he can throw it down the field, he's tough, he hangs in there, he's a smart player too," Wilson said. "You put all those things together with his elusiveness, which is as good as it gets, probably best you've ever seen kind of speed, he's really special."

Where Wilson has impressed is his overall command of Seattle's offense. He's just the fourth QB in league history to start the season with six straight games with a passer rating of 100 or higher. He hasn't thrown an interception since Week 17 of last season. Wilson is playing with a confidence and savvy that's flashed at times throughout his career, but perhaps never for such a prolonged period.

Here's what else to watch as the Seahawks and Ravens meet for the first time since 2015:

MY NAME IS EARL

Aside from the quarterbacks, the biggest story line is the return of safety Earl Thomas, who spent his first nine seasons with Seattle before signing with Baltimore in free agency. Thomas was a star with the Seahawks, a founding member of the "Legion of Boom" secondary and a three-time first-team All-Pro selection. The final image of Thomas with Seattle was being carted off the field last season after breaking his leg in Arizona and flashing the middle finger at Seahawks coach Pete Carroll, angry about not getting a contract extension with the Seahawks.

"I don't know what this game is going to bring, but I definitely respect and love the organization. They gave me my first shot," Thomas said.

The Ravens have been forced to shuffle their defensive backfield this season to cope with injuries to Tavon Young, Tony Jefferson, DeShon Elliott and Jimmy Smith. First-year general manager Eric DeCosta refurbished the secondary this week by trading for two-time Pro Bowl cornerback Marcus Peters and signing safety Bennett Jackson from the Jets practice squad.

Both newcomers are expected to play Sunday, so it's imperative that they work in unison with cornerbacks Marlon Humphrey and Brandon Carr, as well as Thomas.

"Communication is going to be really critical, especially there," Harbaugh said. "It won't be quite as loud, because their offense will be on the field, maybe as it would be here. But it's a loud place, and you're on the road. It's terminology."

Seattle should get a boost on its defensive line with the return of Jarran Reed after he was suspended for the first six games. Reed had 10½ sacks last season, but more important will be his ability to draw attention and potentially open up more on the outside for Jadeveon Clowney and Ziggy Ansah. Seattle has just 10 sacks through six games and didn't have a quarterback hit recorded last week against Cleveland.

The task this week isn't so much getting pressure on Jackson as it is keeping the elusive QB contained.

The Ravens cranked up the music at practice this week to simulate the crowd noise at CenturyLink Field. Jackson played in packed stadiums while at Louisville, and he's twice started in Kansas City against the Chiefs. But playing in Seattle is taking it to another (sound) level.

"The coaches have been telling us it's very loud," Jackson said. "I just have to do a good job of executing, calling out the plays and letting everyone hear me."