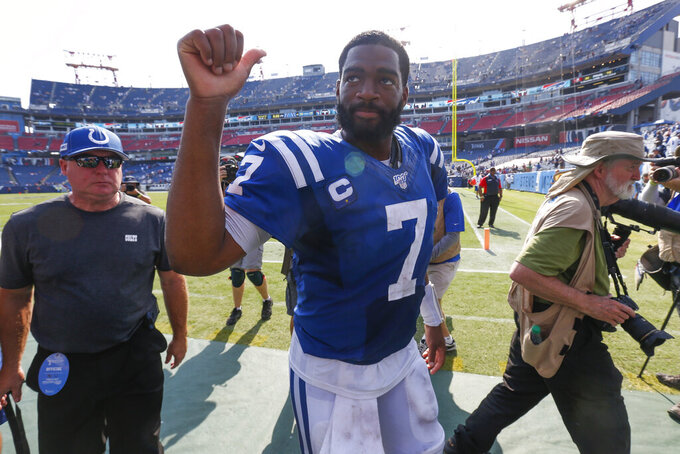 NASHVILLE, Tenn. (AP) — The Colts keep changing quarterbacks, not that it matters when they play the Titans.

Jacoby Brissett became the latest Indianapolis quarterback to top Tennessee, throwing a 4-yard touchdown pass to T.Y. Hilton with 4:38 left to lead the Colts to a 19-17 victory Sunday in the Titans' home opener.

Brissett had come up empty for Indianapolis against Tennessee, losing both games he started against the Titans in 2017. After Andrew Luck retired with a perfect 11-0 record against the Titans, Brissett picked up right where Luck left off. He passed for 146 yards and three TDs despite also being intercepted and losing a fumble.

"Honestly, I wanted to see what he's made of," Colts tight end Eric Ebron said of his buddy, Brissett, when Indy got the ball back for that go-ahead drive. "I've wanted to see because he's one of my great friends, and I just wanted to see what kind of person he was going to be in that situation, and he showed us all."

"I have zero concern," Colts coach Frank Reich said when asked about Vinatieri. "I mean, he hit the upright on the one. You probably saw the first one. It was not a good operation. The snap and hold was not clean. I've held for kicks. The ball was barely on the ground, it was not clean. ... Zero concern."

It was Indianapolis' 14th win in its last 16 games against Tennessee overall, and a big AFC South win after the Colts managed a split of their first two games on the road.

"That's a big start for us," Reich said.

The Titans (1-1) missed their chance for payback against Indianapolis after losing the 2018 regular-season finale, along with a playoff berth on the line for the winner. They haven't started 2-0 since 2008 when they won their first 10 games and last won the AFC South.

"We let one slip for sure," Mariota said.

The Titans had one last chance, getting the ball back with 1:07 left. But Mariota threw incomplete to rookie A.J. Brown on fourth-and-2 with 11 seconds left. Mariota took the blame for spiking the ball on third down, choosing to stop the clock with 15 seconds left rather than run another play.

"That's totally on me," Mariota said.

Brissett put the Colts up 7-0 with a 3-yard shovel pass to Ebron in the first quarter, and he capped a 12-play drive in the second with a 12-yard TD pass to Parris Campbell. Vinatieri missed the extra point, leaving the Colts with a 13-7 lead.

Tennessee grabbed a 17-13 lead when Derrick Henry ran for a 1-yard TD and Cairo Santos kicked a 49-yard field goal in the third. The Titans scored their first TD when Mariota tossed a 1-yard TD pass to lineman David Quessenberry, the first in an NFL career delayed by a fight with cancer.

Santos, who was signed to fill in for Ryan Succop, missed a 45-yarder wide left in the fourth.

Sunday was the hottest home game for the Tennessee Titans with a temperature of 93 degrees at kickoff, and it got hotter when a mechanical failure caused pyrotechnics equipment to burst into flame s about five minutes before kickoff. Workers quickly extinguished the fire near the 5-yard line on the sideline near the Titans' locker room, while Taj George, a member of the group Sisters With Voices (SWV), sang the national anthem.

The Titans said nobody was hurt, with only minor field damage.

The Titans honored a big piece of their past at halftime, becoming the first NFL team to retire either No. 9 or No. 27 for the late Steve McNair and Eddie George. Mechelle McNair and her two sons, McNair's mother and brothers attended along with George and his sons. The Titans turned it into a family affair with George's wife singing the national anthem.

Colts CB Pierre Desir hurt a knee in the third quarter at the end of a 25-yard catch by Titans receiver Corey Davis. He did not return.