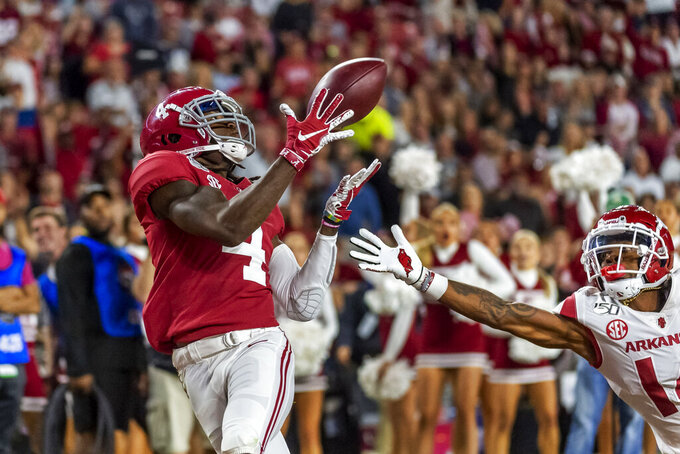 FILE - In this Oct. 26, 2019, file photo, Alabama wide receiver Jerry Jeudy (4) catches a touchdown pass against Arkansas during the second half of an NCAA college football game in Tuscaloosa, Ala. This year’s NFL draft features a superb group of wide receivers, including Jeudy, who are expected to make immediate impacts in the NFL. (AP Photo/Vasha Hunt, File)

The former Alabama receiver was the 15th pick in the NFL draft and the first Crimson Tide player ever selected by Broncos general manager John Elway during his decade in charge of Denver's football operations.

Although he was selected three spots after the Las Vegas Raiders drafted his college teammate, Henry Ruggs III, Jeudy suggested this spring that he’s the cream of the crop among the deep class of wide receivers that featured six first-rounders.

“I feel I’m the best receiver because I got the ability to separate,” said Jeudy, whose crisp route running is considered the best by an incoming rookie in several seasons. "I’m a receiver. I know how to get open.”