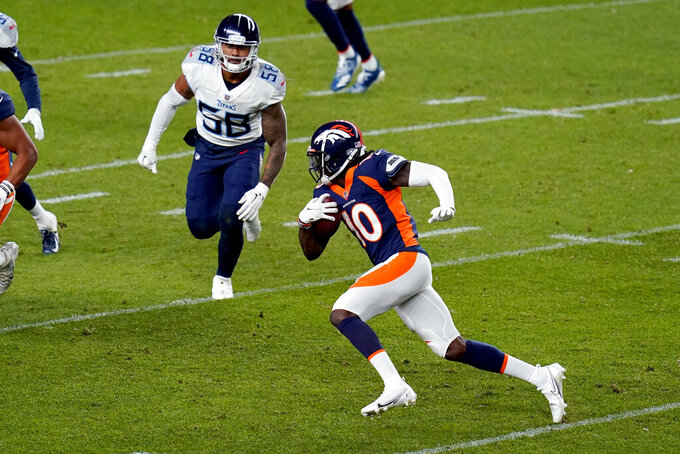 ENGLEWOOD, Colo. (AP) — With Pro Bowler Courtland Sutton out for the season, who is the Denver Broncos’ No. 1 receiver?

The short answer is -- they don’t have one.

Top draft pick Jerry Jeudy might soon change that, but for now the Broncos are shying away from calling anybody their top target.

“That whole No. 1 thing that everybody talks about is something that I think gets talked about outside our building,” offensive coordinator Pat Shurmur said. ”(Jeudy)’s one of them, but I think the ball needs to get spread around and that’s important.

“Everybody has to touch the ball and everybody has to do their part. I think it’s way early for people to start talking about 1s, 2s and 3s. Just get open, we’ll throw you the ball, and we’ll keep it at that.”

Jeudy has been getting open, twisting cornerbacks around just about every snap, but he’s also dropped three passes, a sign he might be pressing as he makes his leap from the SEC to the NFL.

Losing Sutton to a torn ACL last week in a loss at Pittsburgh leaves the Broncos with a trio of rookie receivers led by Jeudy and a pair of third-year pros in Tim Patrick and DaeSean Hamilton who have a combined four touchdown receptions in the NFL and just one since 2018.

The Broncos also used their second draft pick this spring on a receiver, grabbing Penn State speedster KJ Hamler, and they selected Florida’s Tyrie Cleveland in the seventh round.

“We talked about it all camp that we have one of the best receiver corps. We’re prepared for this.”

The Broncos' top pass catcher so far is actually tight end Noah Fant, who has nine catches for 138 yards and two touchdowns.

The only other TD catch came from running back Melvin Gordon last week at Pittsburgh, where Sutton and QB Drew Lock got injured.

Jeudy has eight catches for 118 yards and Hamler had three receptions for 48 yards in his debut last week after returning from a strained hamstring.

“The young guys have to step up,” Gordon said. “In some situations, you don’t have to step up until the end of the season or maybe the next year. We’ve had some key guys go down, so you know what, you have to grow up quicker than most.

“Those guys have the confidence in themselves to go out there and make a play. They have the talent."

What they lack is the experience.

His teammates don’t think it will be long before Jeudy is considered the No. 1 receiver in Denver.

“The man is amazing at running routes,” Patrick said.

Jeudy was considered the gem of this year’s deep class of wide receivers because of his elite speed, fine footwork, terrific hands and strong work ethic. He also brought an advanced route tree from Alabama’s pro-style offense and regularly faced more bump coverage from elite defensive backs than most receivers do in college football's spread offenses.

Jeudy had a pair of costly drops in the opener, which the Broncos lost to the Titans on a last-minute field goal, and he bruised his ribs on a big hit last week, when he dropped another pass and couldn’t hold on to another throw behind him.

“I feel like the first game was on me,” Jeudy said. “I felt like the second game I could have done a lot better.”

With Sutton sidelined for the season, Jeudy has an even bigger target on him. At least he has a healthy Hamler to take away some attention.

“Jerry and KJ are two unbelievably talented players,” said backup QB Jeff Driskel, who will make his first start for the Broncos (0-2) against Tampa Bay (1-1) on Sunday. “On top of that talent, they’re also passionate about the game of football. They’re dedicated to their craft. I see them both improving each and every day. They’ve already made big plays so far in their career only two games in.

“Their production might be expedited a little bit, but that’s what they’re here for, and they're talented. I have to get those guys the ball. They can make plays for us.”