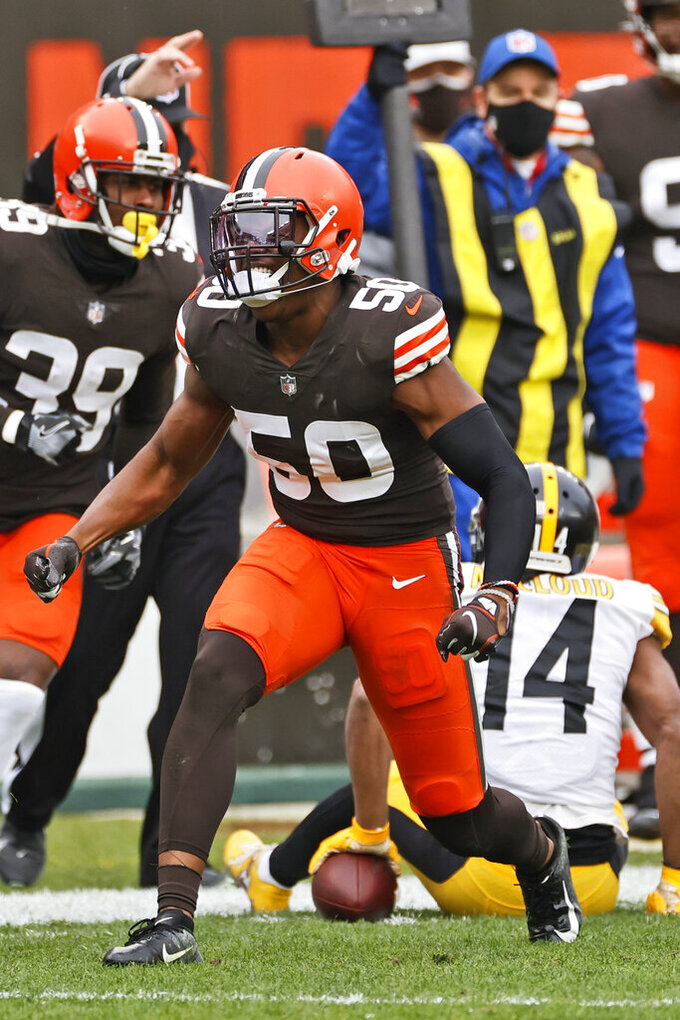 FILE - Cleveland Browns linebacker Jacob Phillips (50) celebrates after tackling Pittsburgh Steelers wide receiver Ray-Ray McCloud (14) during the first half of an NFL football game, Sunday, Jan. 3, 2021, in Cleveland. The Browns could have some help at linebacker for their playoff push. Jacob Phillips, who suffered a biceps injury during training camp, was designated to return from injured reserve on Monday, Dec. 6, 2021, as Cleveland returned from a bye week devoted to getting healthy and recharged for the last five games. (AP Photo/Ron Schwane, File)

CLEVELAND (AP) — The Cleveland Browns could have some extra help at linebacker for their playoff push.

Jacob Phillips, who suffered a biceps injury during training camp, was designated to return from injured reserve on Monday as Cleveland returned from a bye week devoted to getting healthy and recharged for the last five games.

A third-round pick in 2020, Phillips got hurt during the first of two joint practices with the New York Giants on Aug. 19. He was placed on IR on Sept. 21.

The roster move opens a three-week window for Phillips to be activated, but coach Kevin Stefanski indicated Phillips might be ready soon.

“Really excited for Jacob to be back out there in uniform and practicing,” Stefanski said on a Zoom call. “Those are long ways away when you first get injured and you’re spending time in that training room. But just to see him out there, I know that’s just a great reflection how hard he’s worked."

Stefanski said the Browns (6-6) will decide over the next few days if Phillips is ready to play. Cleveland hosts the Baltimore Ravens (8-4) on Sunday in what is for all practical purposes a must win if the Browns want to make the postseason.

Phillips had been expected to have a major role this season. The former LSU standout made three starts as a rookie and was credited with 24 tackles.

Linebacker Anthony Walker Jr. said Phillips continued to pitch in despite being sidelined.

“True professional. You talk about somebody that’s ever since he’s been out came in with the mindset that I’m going to help the team any way possible while also getting my rehab in and trying to get back as fast as possible to help the team,” Walker said. “He’s been a great voice for us on the sideline, helping us when we come off in practice, watching film, everything like that. He’s been there with us every step of the way.

"So definitely excited to have him back and definitely a boost for our linebacker room.”

In other injury updates, Stefanski said speedy wide receiver Anthony Schwartz remains in concussion protocol. He's been out since getting hurt at New England on Nov. 14.

Stefanski didn't have a specific update on tight end Harrison Bryant, who suffered a high ankle sprain on Nov. 28 and could be headed to IR.