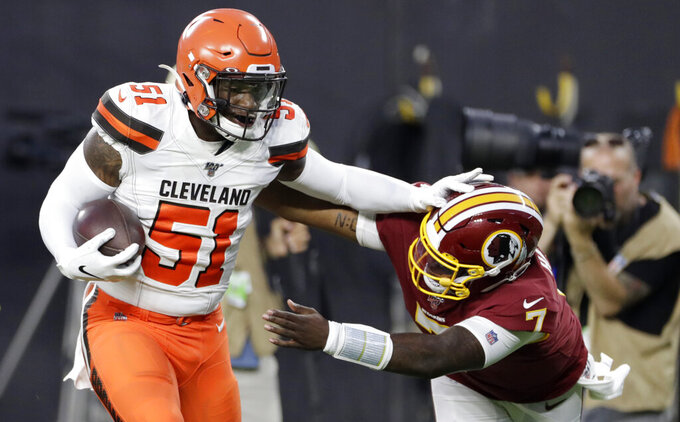 FILE - In this Thursday, Aug. 8, 2019 file photo, Cleveland Browns linebacker Mack Wilson (51) returns an interception for a touchdown, as Washington Redskins quarterback Dwayne Haskins (7) reaches for him during the first half of an NFL preseason football game in Cleveland. Proficient on social media, Browns rookie linebacker Mack Wilson has also shown a nose for the ball. The fifth-round pick from Alabama had two interceptions in his NFL preseason debut and has been impressive in camp. (AP Photo/Ron Schwane, File)

The fifth-round pick from Alabama was the only NFL player with two interceptions in the opening week of the preseason — returning one for a touchdown — and is building a reputation as a ballhawk with four picks over the first 12 camp practices.

Wilson doesn't have the star power of teammates Baker Mayfield, Odell Beckham Jr. or Jarvis Landry, but is making a surprising impact for the No. 155 overall selection in the draft.

"Look at Big Al, he struggled early in camp, but just kept working and kept his head down, and he continues to get better," Cleveland coach Freddie Kitchens said Saturday after practice. "Having problems right away is not something you want to go through, but if you come through the other side, you're a better player than you were before."

Kitchens has a natural affinity for Wilson, giving him a nickname that refers to their bond as Crimson Tide alumni. Browns fans have taken to him, as well, because of his expressions of love toward Cleveland on Twitter and Instagram.

The 6-foot-1, 233-pounder proclaimed himself "the best linebacker in the draft" after falling to the fifth. He played like it Thursday in the Browns' 30-10 win over Washington, then left FirstEnergy Stadium wearing the jersey of Cavaliers guard Collin Sexton.

Wilson returned a short pass by Dwayne Haskins 40 yards for a pick-six in the second quarter and snared a downfield throw by Josh Woodrum in the fourth, just as he had predicted to roommate Sione Takitaki the night before.

"I was like, 'Taki, I'm going to catch two interceptions. I'm going to crib one and I might just catch one,'" Wilson said. "It's crazy. It's unbelievable. I can't really put it into words. I'm just thankful for having these guys as teammates and helping me get interceptions."

Third-round pick Takitaki, who is playing alongside Wilson on the second-team defense, confirmed the story. Kitchens indicated that both linebackers are likely to take reps with the ones later in camp.

"Mack is a confident kid and sometimes I'm like, 'Yeah, we'll see,' but I think I'm going to start believing him now," Takitaki said, laughing. "He told me the same thing before warmups, that he was going to get two. After the second one, I was like, 'Dang, you made it happen.'"

Wilson credits playing quarterback, running back and wide receiver at Montgomery (Alabama) Carver High for giving him a "nose for the ball," but admits "it's hard to explain why. It's just something I have, I guess."

"I had a good game, but there's always room for improvement," he continued. "My mindset is to continue to keep that chip on my shoulder until we win a Super Bowl."

Browns general manager John Dorsey feels strongly that Wilson will be successful in the NFL, but he and Kitchens aren't forcing him into the fire.

Veterans Christian Kirksey, Joe Schobert and Ray-Ray Armstrong sit atop the linebacker depth chart and provide a level of consistency that the first-year coach has yet to see from his flashing rookie.

"Just because Mack makes two splash plays, you didn't see the busted assignments," Kitchens said. "He has busted assignments out here on the practice field. Not to take anything away from his play, but I want to see him coming back from those bad plays.

"He has to show he can win his one-on-one battles. Then, maybe, he gets that right to spend some time with the first group."

RB Kareem Hunt took part in team drills for the first time. The former Chiefs standout was on the non-football injury list with a strained groin until Aug. 3 and is suspended for the first eight games of the season as a result of a domestic violence incident. ... WR Antonio Callaway (ankle), CB T.J. Carrie (hamstring) and TE Seth DeValve (concussion) did not practice. Callaway was hit with a four-game NFL suspension one day earlier after failing a substance abuse test. ... Incumbent K Greg Joseph, who missed an extra point against the Redskins, went 5 of 5 during a field goal drill. K Austin Seibert, a fifth-round pick from Oklahoma, failed from 47 yards and was 4 of 5.