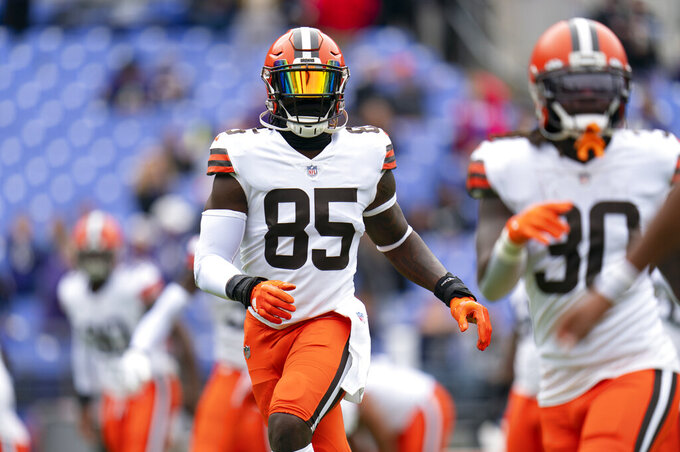 BEREA, Ohio (AP) — The Cleveland Browns will be without starting linebacker Jeremiah Owusu-Koramoah and tight end David Njoku, one of their top offensive players, on Sunday when they visit the Miami Dolphins.

Owusu-Koramoah, who also missed the Browns' Oct. 31 win over Cincinnati with a sprained right knee, was ruled out Friday by coach Kevin Stefanski after practice. Owusu-Koramoah wore a brace during the portion of the indoor workout open to reporters.

Stefanski said Owusu-Koramoah did not have a setback.

The Browns (3-5) also will be without Njoku, who is second on the team with 34 catches for 418 yards. He'll miss his second straight game with a high ankle sprain suffered on Oct. 23 against Baltimore.

Owusu-Koramoah's absence is another blow to Cleveland's linebacking corps, which has been decimated by injuries this season. Anthony Walker Jr. (quadriceps) and Jacob Phillips (pectoral) both sustained season-ending injuries.

Cleveland is getting back Pro Bowl cornerback Denzel Ward and Pro Bowl right guard Wyatt Teller. Ward missed three games with a concussion while Teller sat for two games with a calf injury.