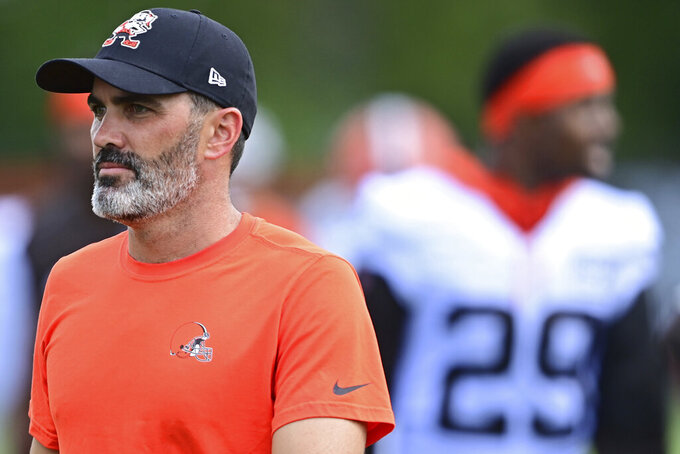 And, several turned into highlights.

The Browns wouldn't object to seeing them again.

“As long as you make them at 100 miles an hour, right?" Cleveland coach Kevin Stefanski said before Friday's practice. "He's a player who plays sometimes at a frenetic pace. We have tried to make him understand that you can make plays within the framework of the defense, and every once in a while, he will make those extraordinary plays.”

Owusu-Koramoah was a major bright spot in an otherwise lusterless 2021 season for the Browns, who went 8-9 and fell way short of huge expectations while ensnared in needless drama.

The speedy second-round pick from Notre Dame started 10 games, played in 14 and finished with 76 tackles (49 solo), 1 1/2 sacks and forced two fumbles. The Browns lined him up all over the field — outside and inside the offensive tackles, even in the slot.

But what really stood about Owusu-Koramoah, known simply as JOK to fans, was his unique ability to close on the football.

“Very explosive,” defensive coordinator Joe Woods said of Owusu-Koramoah, listed at 6-foot-2, 221 pounds. "When he puts his foot in the ground he can go from point A to B — right now. So his ability to match up in coverage, his ability to make plays in space is unique.”

Because he was enamored of that closing speed, and the potential for Owsusu-Koramoah to cover tight ends and running backs, general manager Andrew Berry traded up in the 2021 draft to get him. It appears to be a wise move.

Owsusu-Koramoah is a versatile weapon for Woods, who didn't hesitate in throwing concepts and other challenges at the young LB last season. Whether playing inside, outside, blitzing or dropping back in coverage, he handled it all.

“The guys who are on the field are normally the guys that can handle it when you get rookies," he said. "You have to be careful because you guys see the ability he has so if you are sitting there on the grease board drawing all types of things up. But at the same time, they have to be able to handle it.

"We slowly added things to his plate along with the rest of the defense, and I felt like he did a good job.”

That's not to say there weren't problems. Owusu-Koramoah got off to a slow start when he contracted COVID-19 in training camp. Then, he suffered an accident while lifting weights, needed stitches in his forehead and couldn't wear a helmet.

A sprained ankle kept him out for three games and he bruised his throat against the Los Angeles Chargers. But once he hit his stride, Owusu-Koramoah took off, which is also what got him into some trouble.

This season, Owusu-Koramoah vows to be smarter about when to play risky.

“I have to rely on instincts, I have to rely on what I already know,” he said. “The repetition out here will allow me to understand when to and when not to. It’s definitely a gauge. What’s the down and distance, what quarter are we in? What’s the score? You know, all of that comes into play.”

Owusu-Koramoah's role will likely expand, but the 22-year-old isn't politicking for more. Not his style.

“However the coaches need me I’m about to it,” he said. “”I’m ready to do whatever the team asks of me.”

That humility is just another reason Owusu-Koramoah, who twice visited Africa during the offseason to host youth football camps, is revered by his teammates and coaches.

“Jeremiah is very thoughtful, very intelligent, very enthusiastic and energetic about his teammates and about life," Stefanski said. "A deep thinker. Enjoy being around him. Obviously, he has a bright future in this league, but I just think he's a great person to spend your days with.”

NOTES: QB Deshaun Watson took all the snaps with Cleveland's first-team offense as he and the team await a decision from NFL disciplinary officer Sue L. Robinson, who will decide if he violated the league's personal conduct policy because of sexual misconduct allegations. Watson will practice in front of fans Saturday for the first time since coming to Cleveland. ... WR Anthony Schwartz is day to day with a left knee strain suffered during Thursday's workout. Stefanski said it's nothing long-term, and that it's “too early” to look for outside receiving help. Rookie David Bell (foot) is also sidelined.