Cardinals evolving in long NFL season, but not in a good way 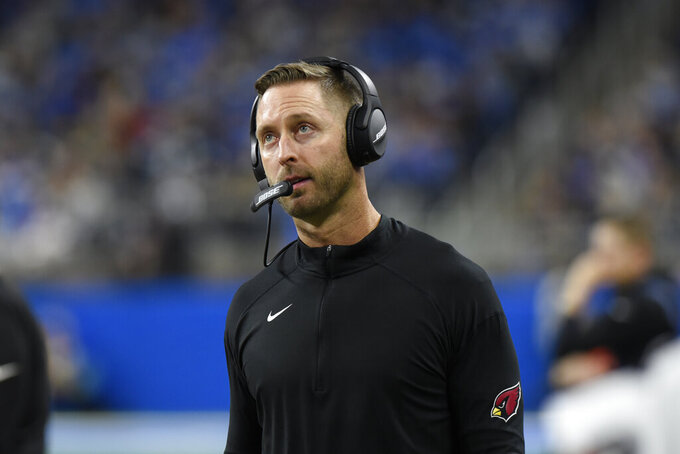 Arizona Cardinals head coach Kliff Kingsbury watches from the sideline during the first half of an NFL football game against the Detroit Lions, Sunday, Dec. 19, 2021, in Detroit. (AP Photo/Jose Juarez)

Several of the Arizona Cardinals like to talk about how teams evolve over the long NFL season.

The Cardinals are definitely evolving. The problem is it's not happening in the correct direction.

Arizona (10-4) suddenly looks like a mediocre team after getting blown out in a 30-12 loss to the lowly Detroit Lions, who came into Sunday's game with just one through 13 games. The lopsided loss is part of a disturbing trend: After starting the season with a 7-0 record, the Cardinals are 3-4.

Now quarterback Kyler Murray and the rest of the roster are trying to recapture the magic from September and October, when Arizona looked like it might be the best team in the NFL.

“We know the guys we’ve got in the locker room,” Murray said. “We’ve got the talent, we’ve got the coaches, we’ve got the leadership. All of that’s there, it’s just about locking in and playing up to our capabilities.”

The Cardinals' regression feels somewhat similar to 2020, when the team was 6-3 record but closed with a 2-5 stretch to finish with an 8-8 mark and miss the playoffs for a fifth straight season. It's particularly similar for Murray, who has looked like an MVP candidate at the start of both seasons only to fade in the final weeks.

The one difference is Arizona's start was so good this season that it's almost assured of making the playoffs.

“We’re still 10-4, we’re still first place in the (NFC West) division,” Murray said. "This isn’t anywhere near where we were last year. We aren’t going to allow it to be.”

Even if the Cardinals make the playoffs, they won't stay in the postseason long if they play like they did against the Lions.

Murray had some off-the-mark throws and his receivers had some uncharacteristic drops. Arizona's defense, one of the best in the league through the first half of the season, has looked much more average over the past few weeks.

The good news for the Cardinals is they're still in better playoff position than all but a handful of NFL teams.

RB Chase Edmonds returned after missing four games with an ankle injury and looks like he'll be able to help in the final month. He had six carries for 53 yards, averaging nearly nine yards per carry. The Cardinals' offense has been at its best when Edmonds and James Conner are both options in the backfield.

The Cardinals have a 2-2 record without three-time All-Pro WR DeAndre Hopkins, who is expected to miss the rest of the regular season with a knee injury. Hopkins is one of the NFL's best, so his absence obviously hurts, but Arizona's passing game should still be better than it was against the Lions. Receivers Christian Kirk, A.J. Green and Rondale Moore, tight end Zach Ertz and running backs Edmonds and Conner are all solid pass catchers.

Kirk had nine catches for 94 yards and a touchdown. He's in a contract season so it would be good for the Cardinals — and good for Kirk's pocket book — if he continues to be productive over the season's final three weeks.

The Murray-Kingsbury combo. All three seasons have been the same since the two came to Arizona: The offense is innovative and fresh during the first couple months of the season before the regression hits hard.

DE Jordan Phillips (knee) and Moore (ankle) were hurt against Detroit. Both players had scheduled MRIs on Monday but Kingsbury didn't have updates on their prognosis.

0-4 — Arizona's record under Kingsbury when the Cardinals have a chance to clinch a playoff spot.

The Cardinals have a fine line to walk between panic and urgency as they prepare to host the Colts on Christmas Day. Arizona still has the ability to be a good football team but things are definitely not trending in the proper direction.

By Will Graves 29 minutes ago
By Tom Withers 5 hrs ago
6 hrs ago
By Dennis Waszak Jr. 12 hrs ago
By John Wawrow 12 hrs ago