Cardinals searching for answers after 38-28 loss to Rams 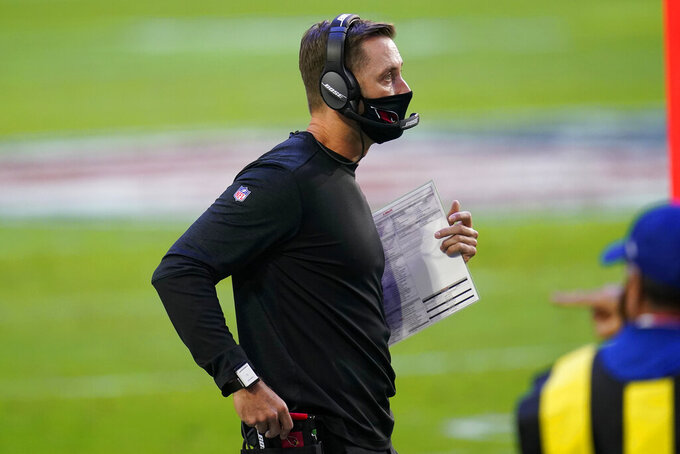 GLENDALE, Ariz. (AP) — The Arizona Cardinals were rolling the first seven weeks of the season, their high-octane offense churning up yards, the NFC West title within their sights.

After a disappointing loss to the Los Angeles Rams, their fourth in five games, the Cardinals find themselves all but out of the division race and on the outside looking in for an NFC Wild Card spot.

In dire need of a win, Arizona dropped a desert dud on Sunday, stretching its losing streak to three straight games with a 38-28 loss to the Rams at home.

“We do not feel like a 6-6 ball club, but we are,” Cardinals cornerback Patrick Peterson said. “We’ve got four games left in the season and we’ve got to find a way to win those.”

The Cardinals returned home after a frustrating trip to New England, where they led by 10 early, missed a late field goal to take the lead and lost 20-17 on a last-second field goal.

That put Arizona two games behind division-leading Seattle with time running out on the season.

Instead of making up ground, the Cardinals dug a deeper hole against the Rams with defensive breakdowns, a still-sputtering offense and another average game by quarterback Kyler Murray.

Arizona, the NFL's No. 2 offensive team, was limited to 232 total yards. the defense was gashed for 463 yards, including 351 passing by Jared Goff.

The loss, the Cardinals' seventh straight to the Rams, knocked them out of the final NFC Wild Card spot with four games remaining.

“We’re 6-6 with a month left, anything can happen,” Cardinals coach Kliff Kingsbury said. "The guys played hard, we just didn’t execute as well as we could.

Murray was dynamic early in the season, racking up touchdowns through the air and on the ground. Defenses seem to have figured out Arizona's diminutive quarterback and Kingsbury's plans for him.

Murray did throw for three touchdowns against the Rams, but had just 173 yards passing and again was held in check in the running game, limited to 15 yards on five carries.

The second-year quarterback also lost a fumble in the fourth quarter on a strip sack and, after the Rams missed a field goal, had an interception returned by Troy Hill for a 35-yard touchdown. The pick-6 put the Rams up 38-21, all but ending Arizona's hopes of a comeback victory.

“We kind of hit a wall as far as offensively,” Murray said. “The first half of the season was kind of effortless, we were moving the ball, having fun, playing fast. Now we’ve faced a little adversity and it’s now we react, how we adjust.”

Arizona got off to a solid start, scoring the opening touchdown on a 59-yard pass from Murray to Dan Arnold.

The rest of the first half seemed as if they Cardinals were stuck in the desert sand.

Murray completed two more passes for 14 yards on 11 attempts and the Cardinals had four straight three-and-outs. Arizona had 82 yards in the half — 22 after the opening drive.

“They had a good plan, we just didn’t get into a rhythm,” Kingsbury said. "They played physical, took some things away and we had three or four three and outs in a row, which you can’t do in this league."

Kingsbury opened the second half with a series of quick-hitting passes for Murray and it seemed to provide a spark.

But every time the Cardinals did something right, they followed it with a miscue.

Murray hit DeAndre Hopkins on a 4-yard touchdown pass to pull Arizona within 17-14, but the Rams marched right through the Cardinals' defense for Jared Goff's 1-yard TD run.

Arizona recovered a fumbled punt by Nsimba Webster and Kenyon Drake scored on a 4-yard run two plays later to make it 24-21. Henderson burst through a huge hole for a 39-yard touchdown on the next drive to make it a 10-point lead again.

The Cardinals caught a break when Matt Gay missed a 37-yard field goal after Murray was strip sacked, only to see the lead climb to 17 on Hill's pick-six.

“As a defense, if we want to go where we want to go, we have to do a better job,” Peterson said. “We can’t have anymore ‘my bads,’I thought I saw this.’ We need to be sharp at all times.”

They better do it soon. Time is running out.