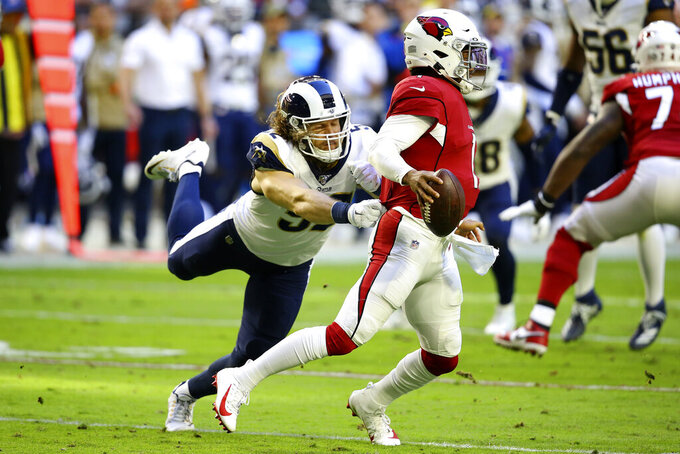 That's why his $12,500 fine for the tweet wasn't reduced by the league, the Los Angeles Rams linebacker says with a chuckle.

“I was not remorseful enough,” the veteran said when asked about his failed appeal of the fine.

Matthews says the NFL got that call right: He isn't remorseful, because he feels he was telling the truth when he wrote: “The storyline for the 2019 season continues to be the refs inability to make the accurate and correct calls week in and week out. Al Riveron (the NFL's senior vice president of officiating) continues to blindly side with his refs and the current status quo. Something must change! Zero accountability.”

“I was correct,” Matthews said Thursday. “Ultimately, I think most people apologize for feeling remorse when they're in the wrong, and I don't think I was in the wrong. The only thing I was wrong for doing was for going against the rules of the CBA, which is to not talk poorly about officiating."

Matthews has been on the wrong end of plenty of calls during his 11-year pursuit of the NFL's quarterbacks, and he has been outspoken in his criticism of overzealous calls in a league that protects those quarterbacks extensively. His chase continued in Los Angeles this season after a decade in Green Bay, and Matthews is still going strong as he heads into the final quarter of an impressive rebound season with eight sacks in nine games.

His frustration with officials peaked when he sent that tweet from his couch Oct. 14 while he was sidelined with his broken jaw wired shut. He had been accidentally injured by the back heel of Seahawks running back Chris Carson late in the Rams' painful 30-29 loss at Seattle earlier in October.

Matthews won't be worried about his health Sunday night when he leads the Rams' impressive defense against Carson and the Seahawks at the Coliseum. After spending the past two weeks chasing Lamar Jackson and Kyler Murray, Matthews' job gets no easier with the arrival of Russell Wilson.

He has been up to almost every task this season, answering critics who thought his big-play days were over in Green Bay. Although his broken jaw sidelined him for three games in October, Matthews is in the NFL's top 20 in sacks along with teammates Aaron Donald (9 1/2 sacks) and Dante Fowler (7 1/2 sacks).

“He's all we thought he would be, maybe a little better,” Rams defensive coordinator Wade Phillips said of Matthews. “He's come in and done a great job for us.”

Matthews has returned from injury with two sacks in four games, teaming up with Fowler, Donald and Ogbo Okoronkwo to provide a strong pass rush for a defense that has moved steadily up the league rankings for two months despite a 45-6 drubbing from Jackson and the powerhouse Ravens last month.

Los Angeles' defense made major changes while Matthews' jaw was wired shut, and he has adjusted to it well. Three of the Rams' top players in the secondary two months ago in Seattle were gone by the time his jaw healed, with safety John Johnson going on injured reserve while cornerbacks Marcus Peters and Aqib Talib departed in trades.

The moves also included the arrival of Jalen Ramsey, and the superstar cornerback's looming presence has changed Phillips' schemes to Matthews' pleasure.

“You definitely see a switch as far as playing some more man(-to-man coverage) with everything that Jalen is capable of doing back there,” Matthews said. “I think we lead the league, at least as of a couple of (games) ago, with a four-man rush as far as being able to pressure the quarterback. You put man coverage back there and then four guys who can get to the quarterback, ultimately that's a really good combination there. But guys are just playing well, too.”

NOTES: A grinning Todd Gurley had Thursday's top one-liner when the running back was asked about coach Sean McVay's declaration Wednesday that “me not being an idiot” was the reason for Gurley's recent increase in touches and productivity: “He said it, I didn't.” ... Gurley also confirmed his lack of interest in his own touches: “It doesn’t matter. Hit you with the same answer: it’s a team sport, man. We've got great running backs.” ... TE Gerald Everett missed practice with the knee injury that kept him out last week. McVay isn't sure whether his top pass-catching tight end will be able to play against Seattle.