Cowboys hang on to hope, but reality of 2-6 casts dark cloud 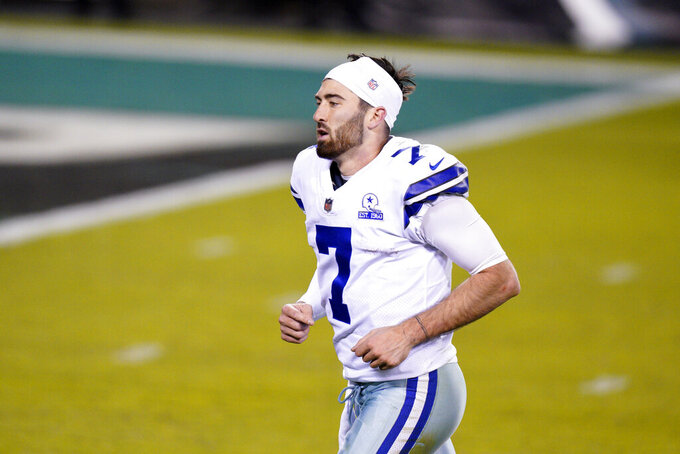 The Dallas Cowboys want to believe they still have a shot at the playoffs at 2-6 in the woeful NFC East.

Even with veteran quarterback Andy Dalton expected back from a concussion and the defense finally showing some spunk, Dallas is about to face the NFL's only remaining unbeaten team in Pittsburgh along with the history that no team with its record has reached the postseason since the playoffs expanded in 1990.

With a three-game losing streak — all double-digit losses — it's probably not necessary at this point for the Cowboys to remind themselves that the playoffs are expanding again in 2020, to 14 teams from 12.

That extra wild-card spot per conference is probably reserved for a team with a winning record, and the only thing Dallas can worry about is trying to get just one victory. Assuming a betting line is established once Dalton returns to practice, the Cowboys figure to be big underdogs at home against the Steelers on Sunday.

“My motto has always been, crazier things have happened,” receiver Amari Cooper said after the 23-9 loss to Philadelphia. “I believe in the way we prepare. I believe in the guys I am in the locker room with. And I think anything is possible.”

Rookie Ben DiNucci was overmatched trying to throw down the field in his first NFL start. The Cowboys tried a number of gadget plays, and a lot of screens to get the ball out DiNucci's hands quickly. His completion percentage was still a ragged 53%, and several downfield attempts were nearly intercepted.

Dallas can only hope DiNucci gets to go back to being an observer as the backup, at least for now, with star Dak Prescott out for the season with a broken ankle.

In three weeks, DiNucci went from taking a few snaps at the end of a blowout loss, to replacing an injured Dalton with the game already out of hand in Washington, to starting in prime time in his home state of Pennsylvania. Believe it or not, the Cowboys had a chance to take the NFC East lead. Now they're 1 1/2 games behind the Eagles with eight to play.

“It was a tough contest for the young man,” coach Mike McCarthy said. “He can make plays with his feet. He will continue to improve off of that. As far as being in sync with the pass concepts and things like that, it’s important to stay on time in a game like this. It helps everybody. It definitely helps a rookie quarterback making his first start.”

The running game looked as good as it has all year, even with the Eagles loading up to force a young quarterback to beat them with his arm. The numbers weren't overwhelming, with Ezekiel Elliott getting 63 yards on 19 carries and change-of-pace Tony Pollard adding 40 on seven carries for a 5.7-yard average.

The best stretch of the game for the offense came with Dallas protecting a 9-7 lead in the third quarter. The Cowboys ran seven straight times with those two backs for 43 yards before one of many unconventional plays — a reverse to receiver Cedrick Wilson with the expectation that he might throw a pass — resulted in a 10-yard loss before a missed field goal.

The offense needs to get in the end zone. Dallas has one touchdown — late in a blowout loss to Arizona — in three full games without Prescott, who was leading the NFL's No. 1 offense when he went down. It doesn't help Dallas that Pittsburgh is in the top 10 in nearly every important defensive category.

A much-maligned defense finally showed some life. Rookie cornerback Trevon Diggs had two interceptions, and the defense forced and recovered two fumbles by Carson Wentz. The Cowboys are still last by far in the NFL in turnover margin at minus-11, but at least the plus-2 against the Eagles is something to build on.

According to STATS, Dallas is the first team in almost 40 years to lose after holding a team to fewer than 250 yards, force at least four turnovers and get at least four sacks.

Amari Cooper has been a nonfactor too often for a receiver who just signed a $100 million contract. Cooper had a season-low one catch for 5 yards. It's the third time he's been held to one catch since joining the Cowboys midseason in 2018.

LB Sean Lee made his season debut after being out since the start of training camp and needing sports hernia surgery. In addition to Dalton, Dallas could get cornerback Chidobe Awuzie back from a groin injury.

40% — DiNucci's completion percentage on throws beyond the line of scrimmage. The rookie was 12 of 30 with an average of 3.6 yards per attempt. The Cowboys simply weren't ready to let him try much down the field.

After the visit from the Steelers and the open week, Dallas' schedule seems favorable with six of seven games against teams that don't currently have winning records. Looks might be deceiving. Among those teams, Minnesota and Cincinnati are improving and the Cowboys were noncompetitive in the first meeting with Washington. The one team with a winning record is AFC power Baltimore.