Cowboys poised for playoffs with history of failure hovering 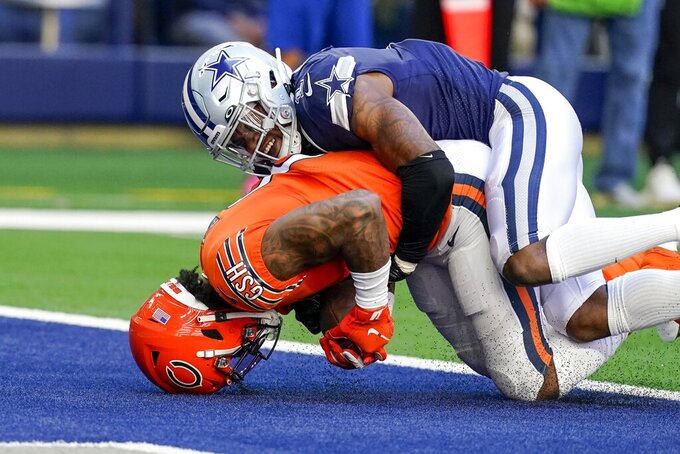 FRISCO, Texas (AP) — The Dallas Cowboys have matched their 6-2 record from a season ago, when they won the NFC East, under more difficult circumstances this year given quarterback Dak Prescott's thumb injury.

A franchise with five Super Bowl titles hasn't even reached the NFC championship game since the 1995 season and hasn't made consecutive trips to the playoffs in 15 years.

The reality of postseason failure still hangs over a team that lost a wild-card game at home to San Francisco last January. It was the second time in three tries that Prescott and star running back Ezekiel Elliott lost their playoff opener.

“It was the first message and it’s a continuous message — handling success is the biggest challenge in this business,” coach Mike McCarthy said. “So it’s up on the wall in the team meeting room for a reason.

“You got to find ways to win every week,” he said. “But our job as coaches is to make sure we continue to grow the football team and that’s where the self-evaluation is critical to that.”

Runaway division leaders a year ago, the Cowboys trail undefeated Philadelphia as they return from their open week with a visit to Green Bay on Sunday.

Still, the path to the postseason is clear despite Prescott missing five games with a fractured thumb on his throwing hand.

Dallas went 4-1 without him, and a struggling offense had its best showing of the season in Prescott's second game back, a 49-29 victory over Chicago before the bye.

If a defense that carried the Cowboys through Prescott's absence can get back to looking like it did before a shaky outing against the Bears, that elusive deep playoff run is realistic.

“I think it just speaks on the resiliency again,” Prescott said after beating the Bears. “I’ve talked to y’all about that over and over about it just being our mantra of this team. If we can trust one another, this team can be dangerous.”

Reigning NFL Defensive Rookie of the Year Micah Parsons is the star of a unit that leads the NFL with 33 sacks and is in the top four in points and passing yards allowed per game.

While the Cowboys are just one takeaway shy of where they were after eight games on their way to leading the league last season, five of those 13 turnovers forced came in one half against Detroit.

Second-year defensive coordinator Dan Quinn is thinking more about the average of barely one takeaway per game in the other seven games.

“I’ve thought we’ve done a good job of affecting the quarterback, but I want to make sure there’s always space for us to continue to find ways to take the ball,” Quinn said. “And then one more thing: tackling.”

CeeDee Lamb has been solid in his debut as the No. 1 receiver after the offseason trade of Amari Cooper, but the Cowboys don't have a group that scares opponents.

They've been linked to free agent Odell Beckham Jr., who is close to being cleared after tearing an ACL in the Super Bowl. He won the title with the Los Angeles Rams.

Maher was released by the Cowboys late in the 2019 season because of inconsistency on shorter kicks. He is perfect inside 50 yards, with both misses in 17 attempts coming from 59 yards. One PAT was blocked.

McCarthy keeps telling his defensive staff he would run right at the Cowboys because that's where the weakness is. Dallas is 24th against the run and gave up 240 yards rushing to Justin Fields and the Bears.

Dallas acquired Johnathan Hankins from Las Vegas before the trade deadline and hopes the 340-pound veteran provides the bulk the club needs on the interior defensive line.

The biggest question for the second half is when eight-time Pro Bowl LT Tyron Smith will return, and what Dallas will do about rookie Tyler Smith in his spot. Tyron Smith appears on track for a December return after tearing a hamstring late in training camp.

The Cowboys drafted Tyler Smith in the first round because they see him as the future left tackle. But they seem inclined to move him even if it's a late-season switch.

Elliott missed the Chicago game with a right knee injury, but that was in part because he had the bye week to help with the recovery.

The two-time rushing champ is expected to return against the Packers, and backup Tony Pollard left little question that Dallas has a tandem in the backfield by rushing for 131 yards and three TDs without him.

1 — The number of times Dallas has missed the playoffs after starting 6-2 or better. The Cowboys were 6-2 in 1986 when they lost seven of their last eight games. That was the season after longtime coach Tom Landry's final playoff appearance.

The Cowboys have quite the sideshow this week with McCarthy returning to Green Bay, where he won a Super Bowl with the Packers to finish the 2010 season. He was fired midseason in 2018. McCarthy made the playoffs nine times in 12 full seasons in Green Bay. He's well on his way to being 2 of 3 in Dallas.