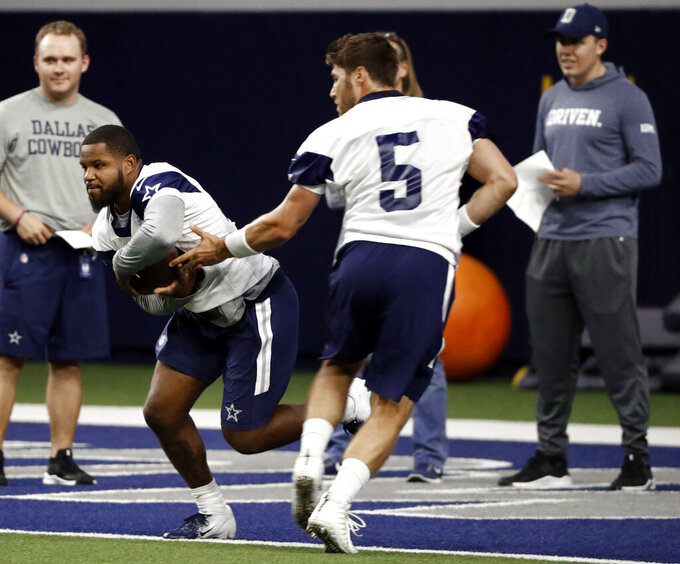 In this Friday, May 10, 2019 photo, Dallas Cowboys rookie running back Mike Weber Jr., left, takes a hand off from rookie quarterback Phillip Nelson (5) during a NFL football mini camp at the team's training facility in Frisco, Texas. (AP Photo/Tony Gutierrez) 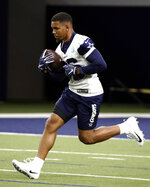 FRISCO, Texas (AP) — Tony Pollard returned kicks and caught passes while growing up admiring Reggie Bush, making it easy to believe the former Memphis running back would be a change-of-pace option behind two-time NFL rushing champion Ezekiel Elliott for the Dallas Cowboys.

The rookie fourth-round pick is also 6-foot, 210 pounds, with plans to put on a little more weight. So running between the tackles isn't something Pollard fears as the Cowboys look to ease the load on a star with 1,003 touches in his first three seasons.

"I know people think he's going to be this gadget guy," running backs coach Gary Brown said. "He's more than that. He's bigger than what you think he is and he runs powerful for a guy you think is a gadget guy. I think he can do all our runs and more, too."

The numbers with Pollard's hometown Memphis Tigers show why he would get labeled. Besides tying an FBS career record with seven kickoff returns for touchdowns, Pollard ran for 552 yards with six TDs while adding 458 yards receiving with three more scores in his final season as a junior.

Pollard isn't concerned about being labeled, and he takes in stride the talk of being nothing more than a backup to begin his pro career.

Dallas drafted another running back in the seventh round in Mike Weber, who was Elliott's teammate at Ohio State when he took a redshirt year in 2015. The Cowboys selected two running backs when they already had one of the league's best because they decided their backup wasn't good enough.

Rod Smith had just 32 carries in the first 15 games before getting 12 while Elliott sat in a meaningless regular-season finale when the Cowboys already had secured the NFC East title. Dallas didn't bring back Smith and instead made the role of Elliott's backup a priority in the draft.

Elliott's 304 rushes last season were 18 fewer than he had as a rookie All-Pro in 2016. But his 77 catches in 2018 were a franchise record for a running back. While the two-time Pro Bowler will be just 24 when the season starts, the toll of 300-plus carries and nearly 400 touches is daunting.

Dallas' last experience with such a load was 2014 rushing champion DeMarco Murray, who had 449 touches that year. The Cowboys let him go in free agency after that All-Pro season, and Murray retired three years later at age 30 without coming close to the production of his best year.

"It's just physics," Brown said. "Year after year with that type of workload, eventually, anyone's going to slow down. We're trying to pre-empt that and take care of him now."

The Cowboys have a first-year offensive coordinator in Kellen Moore , just two years removed from being the team's backup quarterback. Moore became star QB Dak Prescott's position coach immediately upon retiring and now is replacing one of his mentors in Scott Linehan.

One of the buzz words for Dallas this offseason is creativity, after Linehan was criticized for lacking it , but the Cowboys are quick to remind how they're defined. It's a run-first offense behind Elliott.

"I don't know that I'd use the word 'limit,'" coach Jason Garrett said when asked about the club's priority in trying to protect Elliott. "We want to get Zeke Elliott the ball."

Weber's outlook isn't as bright as Pollard's, in part because of what Pollard will offer on special teams. Even though kickoff returns don't play much of a role with current NFL rules, Pollard figures to get a long look as a punt returner along with veteran Tavon Austin.

But Weber will have an important ally in Elliott, who quickly turned stardom at Ohio State into a high profile with America's Team . Four years ago, Elliott was coming off a dazzling national championship game, helping lead the Buckeyes to the title in the first year of the college playoff.

"When I first got to Ohio State, Zeke did a good job of helping with the playbook and showing me the way, the works," Weber said. "I think it's like the same thing over again. He can help me again."

And maybe Weber, along with Pollard, can help ease the load on Elliott.