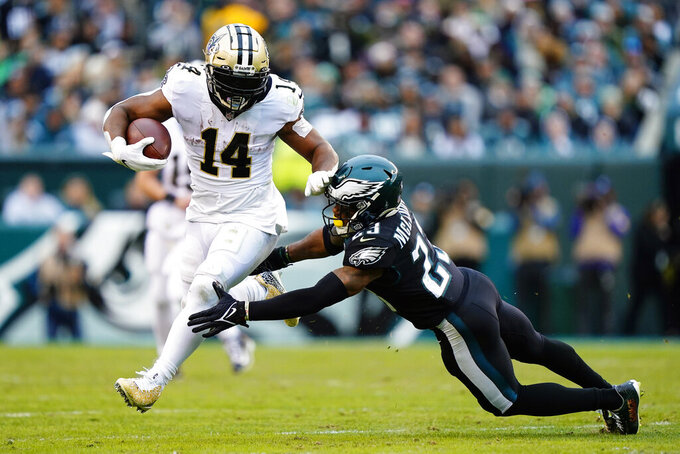 NEW ORLEANS (AP) — The New Orleans Saints have lost four straight for the first time since 2015 and the Dallas Cowboys have been just one victory better during their past four games.

Those coinciding slides set up a pivotal NFC clash in the Superdome on Thursday night when Dallas (7-4) visits New Orleans (5-6).

Complicating matters for the Cowboys will be the absence of at least six coaches — including head coach Mike McCarthy — and at least two players because of a COVID-19 outbreak.

Rookie cornerback Nahshon Wright and right tackle Terence Steele are the players out. Wide receiver Amari Cooper was activated from the reserve/COVID-19 list on Wednesday. He has missed the past two games.

McCarthy tested positive Monday and has been participating in virtual meetings.

“One thing about Zoom meetings, especially having gone through it last year, our process is much better in the virtual setting than it was last year,” McCarthy said. “I am confident in the way the information is distributed and the ability of the coaches present” at practice and meetings.

“It’s like anything; we are far enough into this that everyone understands what we need to get done,” McCarthy continued. “I feel good about the prep. I think with all the change going around us, it is making our team focus tighter.”

The Saints experienced a similar challenge in Week 2, heading to Carolina without eight assistant coaches. That game didn't go well for New Orleans; the 26-7 defeat was their second-most lopsided loss this season.

The worst loss, however, came in their previous game on Thanksgiving night — a 31-6 drubbing by the Buffalo Bills that had coach Sean Payton saying he'd need to look at everything his team is doing and who is doing it.

One significant change could come at quarterback. Trevor Siemian has lost all four of his starts since helping the Saints top Tampa Bay in a game that saw Jameis Winston go down with a season-ending knee injury.

But now Taysom Hill's recovery from a partial plantar fascia tear appears far enough along that he could either start or play significant snaps at quarterback.

Although Hill went 3-1 as a starter last season while Drew Brees was injured, he has yet to be the primary quarterback for the Saints this season, instead subbing in as a read-option threat or as a receiver. His foot injury occurred while making a catch at Tennessee, as did his concussion at Washington earlier this season.

So Hill's first opportunity to serve as QB No. 1 could come at a time when New Orleans is trying to emerge from a midseason swoon.

“There's nothing like playing quarterback in this league and so certainly that requires an additional amount of energy and responsibility,” Hill said. “You have a greater ability to affect the outcome of a game.”

Dallas defensive end DeMarcus Lawrence is set to return for the first time since breaking a foot in practice the week after the opener. The club’s highest-paid pass rusher is looking for his first sack, and to make up for lost time. He’s almost guaranteed a third consecutive year without reaching 10 sacks after consecutive double-digit years earned him his $105 million contract.

“He’s still our leader,” said second-year cornerback Trevon Diggs, the NFL’s interceptions leader with eight. “Came back, nothing changed, still our leader out there, still vocal, still making sure everyone’s doing what they’re supposed to out there.”

During their losing streak, the Saints have been playing without a slew of injured regulars — with no absence more glaring than that of their top offensive player, versatile running back Alvin Kamara. He's missed three games, but returned to practice on a limited basis this week. Fellow running back Mark Ingram, who also missed last week's game, was back at practice, as was starting right tackle Ryan Ramczyk for two practices before sitting out on Tuesday.

"It’s good to have guys getting healthy turning the corner, because we need all hands on deck,” Ingram said.

However, defensive end and sack leader Marcus Davenport (shoulder) has not practiced this week.

“Quarterbacks might not move a lot all season until they play us, you know, then they’re running everywhere,” Saints defensive end Carl Granderson said. "So, I guess that’s going to be the thing for the rest of the year: Every time we play mobile quarterbacks, just to contain them.”

McCarthy hinted the Cowboys might rest Ezekiel Elliott with the star running back having increasing difficulty getting around on an injured right knee. But owner/general manager Jerry Jones said on his radio show he expected Elliott “to have a serious load against New Orleans.”

Elliott has matched his career low in carries each of the past two weeks with nine. It’s the first time in the two-time rushing champ’s six-year career that he has had consecutive games with fewer than 10 carries. He’s only missed one game in his career because of injury.

“No one’s brought it up to me,” Elliott said Sunday of the suggestion that he sit for a game. “If they bring it up to me, I’ve just got to go with what they believe is best for the team.”