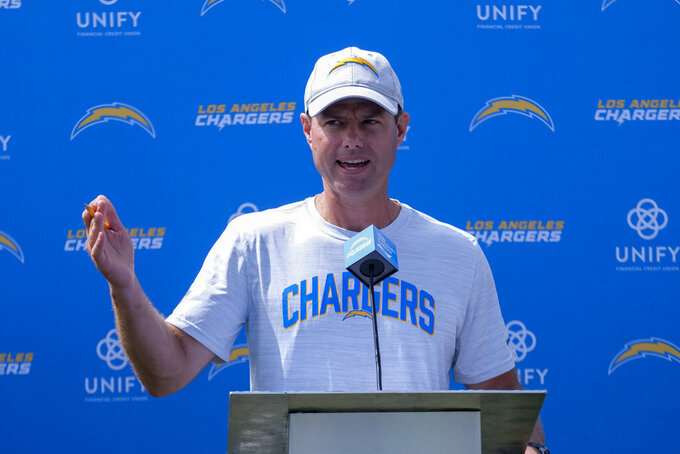 COSTA MESA, Calif. (AP) — Michael Davis went into last year's preseason games knowing that he was going to be one of the starting cornerbacks for the Los Angeles Chargers.

As the sixth-year defender prepares for Saturday's contest against the defending Super Bowl champion Los Angeles Rams, his roster spot very much up in the air.

Davis had the worst season of his career last year on a Chargers' defense that had trouble getting off the field and keeping teams out of the end zone after halftime. Coach Brandon Staley and general manager Tom Telesco revamped the defense during the offseason, including signing cornerbacks J.C. Jackson and Bryce Callahan.

With the Chargers expected to be in a nickel defense most of the time, Jackson, Callahan and Asante Samuel Jr. are expected to be the starting cornerbacks when the season opens Sept. 11 against the Las Vegas Raiders.

Where does that leave Davis? That's something he will have to answer on the field over the next two weeks.

“There’s more depth. With more depth, there’s more competition, and that brings the best out of us,” he said.

Davis' struggles last season are why he is on the roster bubble. According to Pro Football Focus, he had the 11th worst coverage grade among the 72 cornerbacks who saw at least 425 snaps. The six touchdowns allowed and eight penalties committed were tied for eighth most.

Davis admitted that the combination of learning a new defense and personal issues off the field were factors in why he struggled.

“Distractions in my personal life, my previous girlfriend. Whatever happens off of the field comes onto the field, and vice-versa," Davis said. “I just think that last year was filled with distractions. This year, I’m able to eliminate all of the distractions go back to my myself, the way that I’ve been doing it before last year.”

Coach Brandon Staley and secondary coach Derrick Ansley have noticed a different approach from Davis, beginning with the offseason program and carrying through to training camp.

Staley added that Davis' performance has been a bright spot in training camp.

“He's got that mindset back to when he was a rookie of grinding and working his way back up,” Ansley said. “He's worked on his lower body strength and technique. Just playing harder for a longer period of time.”

The two main areas where Davis will have to perform well is in the dime package and on special teams.

Davis has been matched up against the tight end and slot receivers in dime, along with being on the edge to stop the run. On special teams, Davis is among many players lining up at gunner in punt coverage.

He will see action on both defense and special teams on Saturday.

“I think just because I’m big and strong, and I’m fast. It’s a different position, but I like it," Davis said of his role in dime. "I think that it just adds more value to me, I guess. We’ll see how it goes. I’m liking it.”

Notes: Staley said that Chase Daniel and Easton Stick will both see one half of action against the Rams. ... Most of the starters will have the night off, but Trey Pipkins and Storm Norton will both play as they continue their battle for the starting spot at right offensive tackle.

38 minutes ago
By Pat Graham 2 hrs ago
By Arnie Stapleton 6 hrs ago
By W.g. Ramirez 9 hrs ago
By Brett Martel 11 hrs ago