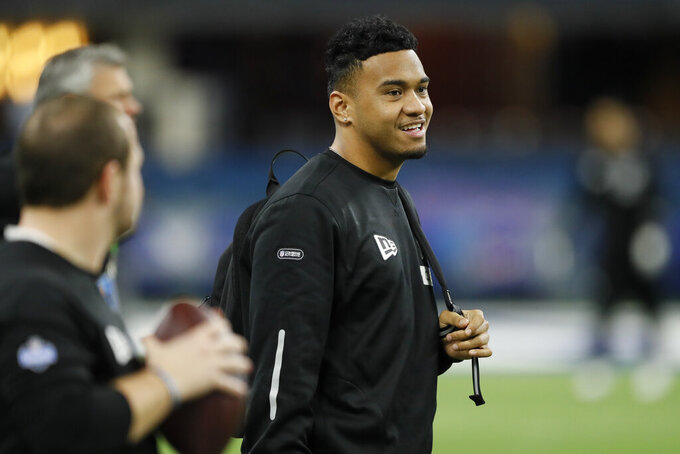 FILE - In this Feb. 27, 2020, file photo, Alabama quarterback Tua Tagovailoa watches a drill at the NFL football scouting combine in Indianapolis. In 54 years of drafting, the Miami Dolphins have taken four quarterbacks in the first round, and two are in the Pro Football Hall of Fame. (AP Photo/Charlie Neibergall, File) 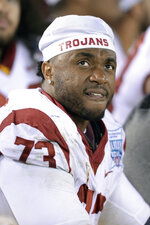 MIAMI (AP) — Because of Tua Tagovailoa’s ability, the Miami Dolphins were willing to gamble on his durability.

The Dolphins made the Alabama quarterback the fifth overall pick in the NFL draft Thursday, and hope he can become a franchise quarterback and the centerpiece of their rebuilding effort that began a year ago.

Miami was undeterred by his long injury history, most recently a dislocated and fractured hip that ended his 2019 season in mid-November.

“For me and my family, whoever decided to take a chance on us, that’s where I belonged,” Tagovailoa said. “My biggest thing is I’m trying to prove this was the right decision.”

The Dolphins added some potential protection for Tagovailoa with the 18th overall pick, selecting 322-pound tackle Austin Jackson of Southern California. Jackson is only 20 and turned pro after his junior season.

“We’ve got good news for Tua,” NFL Commissioner Roger Goodell said when he announced the selection of Jackson.

Doctors cleared Tagovailoa last month to run and begin football activities, and he expects to be able to play in his rookie season.

“What makes me confident in being able to play is what the doctors have told me,” Tagovailoa said. “As far as rehab, as far as the medical rechecks, I’ve checked off all the boxes."

Dolphins general manager Chris Grier said the team is comfortable with Tagovailoa's health, despite an injury history that includes at least four surgeries at Alabama.

“Football is a violent game,” Grier said. “Guys are going to get hurt.”

Tagovailoa will compete with returning starter Ryan Fitzpatrick, who is 37 and is expected to serve as an idea mentor to the rookie. At some point, Tagovailoa will become the 22nd quarterback to start for Miami since Dan Marino retired 20 years ago.

They share the same uniform number, which is why Tagovailoa won’t wear his familiar No. 13 in Miami.

Even before the Dolphins' offseason began, team owner Stephen Ross said the priority was to acquire a franchise quarterback. To start a draft widely considered the Dolphins’ most consequential in many years, they took a quarterback with their first pick for only the second time since 1983.

Miami stockpiled picks last year while enduring a 5-11 season under first-year coach Brian Flores, and during a historically bad start was accused of tanking for Tua.

The dynamic Tagovailoa immediately raises the profile of a team that has too often been off the NFL radar in the past two decades. He threw 76 touchdown passes in 24 starts the past two seasons.

Tagovailoa replaced Jalen Hurts in the national championship game two years ago and rallied Alabama past Georgia, and the following season he was the Heisman Trophy runner-up.

Tennessee Titans running back Derrick Henry, an Alabama alum, was among those applauding the selection of Tagovailoa.

“So excited to see what you accomplish and I know good things are in store for you,” Henry wrote in an Instagram message.

NFL talent evaluators doubted Tagovailoa only because of his health. Along with the hip injury, which at one point was feared to be career-threatening, the left-hander has had surgery on both ankles and the index finger of his throwing hand. He also suffered a broken nose and a concussion while at Alabama.

The Dolphins disguised their intentions well until they were on the clock. Leading up to the draft, speculation had them trading up to select an offensive tackle or even quarterback Joe Burrow with the No. 1 pick, or taking Oregon quarterback Justin Herbert instead of Tagovailoa.

“We didn’t know where a lot of this stuff was coming from,” Flores said with a chuckle. “It was very interesting, to say the least. It was something we would talk about on a daily basis — ‘Did you see that? Did you see this?’”

The Dolphins have three selections Friday, including the seventh and 24th in the second round, which gives them five of the top 56 choices as they try to build a team around Tagovailoa. They’ve already spent $235 million to sign 10 free agents.