Dolphins' defense hope to be much better than in '19 opener 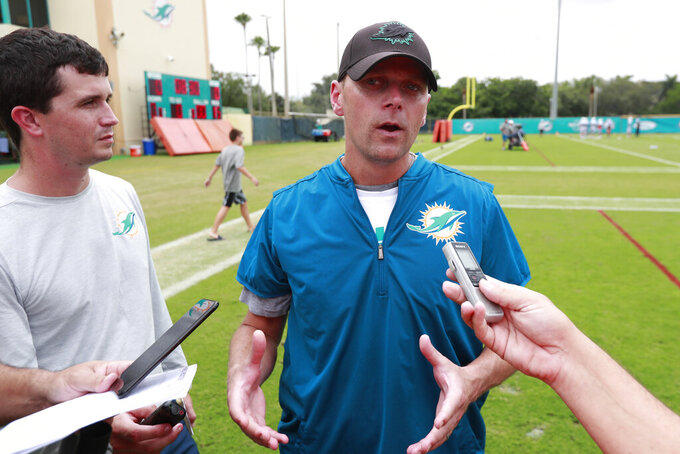 MIAMI (AP) — Josh Boyer is such a fan of football history that he can remember when the Miami Dolphins' defense was good.

“I’m really privileged just to talk about having the same position that that guy had,” Boyer said. "It’s a pretty big deal to me.”

The Dolphins haven't had a Super Bowl championship defense since Arnsparger. Boyer's job is to build such a unit — or at least a defense that can help Miami win a playoff game for the first time since 2000.

It has been a decade since the Dolphins ranked in the top 10 in the NFL in yards allowed. Over the past five seasons they've given up an average of 377 yards per game, more than any other team.

The first chance to judge any progress made by Boyer will come Sunday, when the Dolphins open the season at New England. With five new starters and no exhibition games, the defense is a bit of a mystery — even to Boyer.

“There's definitely some unknown going into it,” he said Monday. "It’s really an unprecedented experience this year, because there was no game action before we go out there. So there’s going to be a little bit of ‘we’ll see.’"

Coach Brian Flores declined to say how much his defense has improved in the past 12 months, but the hope is by a lot. In his debut as a head coach, the Dolphins lost to Baltimore 59-10. They went on to allow a franchise record 494 points, most in the NFL, and finished 5-11.

In the offseason, Miami invested heavily in trying to upgrade at cornerback, where they added veteran Byron Jones and first-round draft pick Noah Igbinoghene, and at defensive end. Boyer was promoted from cornerbacks coach to replace Patrick Graham.

The Dolphins believe the changes will translate to better use of the scheme Flores employed so successfully as a Patriots assistant. The roster is now filled with players who embrace his emphasis on being versatile.

“You’re doing so many different things, and it just keeps things fun and keeps things exciting, and will ultimately keep people surprised,” said linebacker Kamu Grugier-Hill, a free-agent acquisition. "So I love it.”

Miami is expected to rely on a heavy rotation up front while using a mix of 4-3 and 3-4 alignments.

At linebacker, free-agent acquisitions Kyle Van Noy and Elandon Roberts made such a strong impression in training camp that they were elected captains.

On the back end, Miami will have the NFL's best-paid cornerback tandem when they pair Jones with holdover Xavien Howard, whose availability for the opener is uncertain as he recovers from knee surgery.

Igbinoghene looked good in training camp and should further upgrade a secondary that allowed an NFL-high 39 touchdown passes last year. Van Noy and fellow veteran newcomers Shaq Lawson and Emmanuel Ogbah should improve a pass rush that totaled a league-low 23 sacks in 2019.

Now the Dolphins start with a clean slate — and uncertainty.