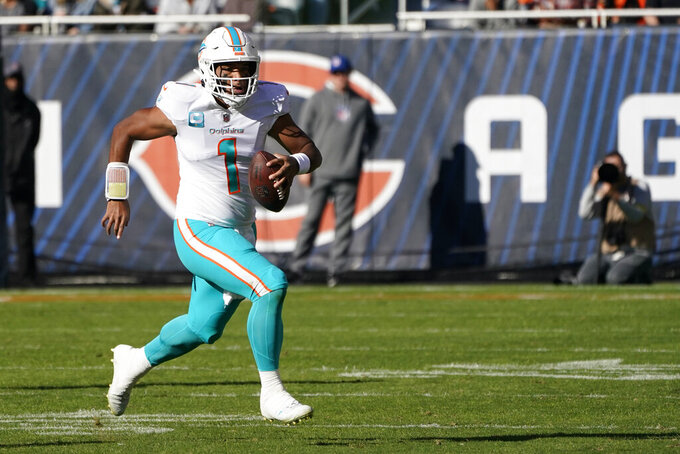 Miami Dolphins quarterback Tua Tagovailoa scrambles with the ball during the first half of an NFL football game against the Chicago Bears, Sunday, Nov. 6, 2022 in Chicago. (AP Photo/Charles Rex Arbogast)

TURNOVER DIFFERENTIAL: Browns minus-4; Dolphins minus-3.

BROWNS PLAYER TO WATCH: WR Amari Cooper is coming off his best game for Cleveland — five receptions, 131 yards and a TD. A precision route-runner, Cooper has been everything the Browns hoped since trading for him in March. The eight-year veteran scored two TDs in his previous game against Miami for Dallas in 2019.

KEY INJURIES: Browns CB Denzel Ward will return after missing three games with a concussion. Ward is essential for countering Miami's speedy wide receivers. ... Browns TE David Njoku (knee) and LB Jeremiah Owusu-Koramoah (knee) were both ruled out Friday and will miss their second straight game. ... Browns Pro Bowl RG Wyatt Teller (calf) is back after missing two games. ... Dolphins RT Austin Jackson is still working his way back from an ankle injury. ... TE Hunter Long is still in the concussion protocol. ... WR River Cracraft was limited this week with an illness. ... LT Terron Armstead was limited with toe and calf injuries.

STATS AND STUFF: The Browns return from their bye week, which followed a solid all-around performance in the win over Cincinnati. ... The Browns play six of their next nine games on the road. ... QB Jacoby Brissett had a career-high 133.7 rating after completing 17 of 22 passes for 278 yards and a TD against the Bengals. ... Brissett spent last season with the Dolphins, going 2-3 in five starts. He laughed when asked if he wanted revenge on Miami. “They didn’t do anything wrong to me,” he said. “I’m a little too old to hold grudges if they did. It's not my style.” ... Browns coach Kevin Stefanski is 2-0 following a bye. ... Chubb (46) needs two rushing TDs to move into third place on the team's career list behind Hall of Famers Leroy Kelly (74) and Jim Brown (106). Chubb rushed for 106 yards and a TD in Cleveland's 2019 win over Miami. ... Chubb and Dolphins LB Bradley Chubb are cousins. ... Browns All-Pro DE Myles Garrett had 1 1/2 sacks vs. the Bengals and has 7 1/2 this season. ... Cleveland's defense limited Cincinnati to 36 yards rushing on Oct. 31. ... LB Sione Takitaki had a career-high 13 tackles and a sack vs. Cincinnati. Takitaki's role expanded following season-ending injuries to Anthony Walker Jr. and Jacob Phillips. ... Dolphins QB Tua Tagovailoa has 18 completions, a 64.3 percent completion rate and 117.6 passer rating on throws of 20 yards or more. ... Miami's Mike McDaniel joined Dave Wannstedt as the only coaches in Dolphins history to win at least six of their first nine games. Wannstedt went 7-2 in his first nine games in 2000. ... The Dolphins are 5-3 in their past eight road games. ... The Dolphins haven't started the season 7-3 since 2001. ... RB Raheem Mostert is Miami’s leading rusher with 478 yards and is on pace to surpass his career high of 772 yards set in 2019. ... Miami is second in the NFL in yards per play (6.33). ... The Dolphins have faced five of the NFL's top 15 scoring defenses this season: Bills, Patriots, Jets, Vikings, and Bengals. ... LB Melvin Ingram has faced the Browns five times in his career and has 16 tackles, three sacks, one pass defensed, a forced fumble and a fumble recovery.

FANTASY TIP: Hill has scored more fantasy points than any receiver in 2022, even though he only has three touchdowns this season. Hill has 266 yards and 15 catches in two games against the Browns.