Eagles ahead of schedule under rookie coach Nick Sirianni 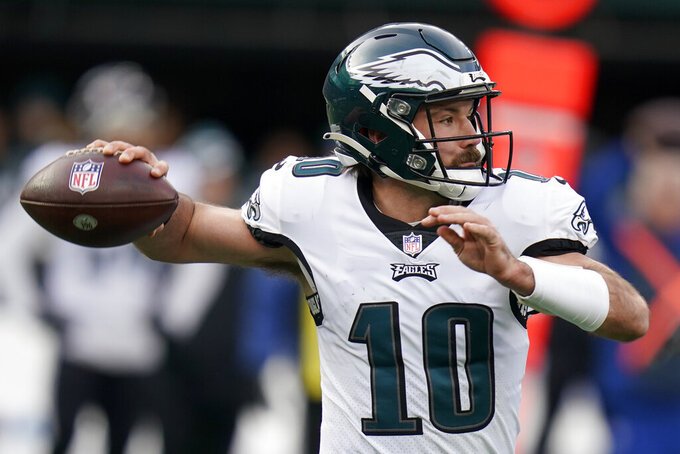 The Philadelphia Eagles have already won two more games than last season and are in the middle of the playoff race under rookie coach Nick Sirianni.

“I think, obviously, I would like to be in better shape,” Sirianni said Monday, a day after the team improved to 6-7 with a 33-18 win over the New York Jets. “There are some games out there that we feel like we could have got earlier in the year that we didn’t.

"But our job is to try to win every single game, so my mind is in a mindset of whatever we got to do to win each and every game, that’s what we’re going to do. And so, I don’t want to look at it as ahead of schedule. All I really care about is getting a little bit better each day.”

The Eagles are a half-game behind Washington (6-6) and San Francisco (6-6) for the last two wild-card spots in the NFC.

“We have a formula of how we want to do this, and for the teams that do that, that puts you on schedule of being the best team that you can be that year with the guys and the coaches and the players that you have on that team,” Sirianni said. “And so, I like the progression we’re on, because I do believe that that’s what we’ve done each day, is just getting a little bit better. That’s been the message, and we got some great leaders on this team that enforce that message.”

The victory over the Jets was Philadelphia’s fourth in six games following a 2-5 start. Backup quarterback Gardner Minshew filled in for Jalen Hurts and led the team on seven straight scoring drives until a punt on the final possession.

Hurts was a late scratch because of an ankle injury but is expected to return to the starting lineup when the Eagles return from a bye.

The Eagles have rushed for 175-plus yards in six straight games. They’ve had three different leading rushers in those games - Hurts, Miles Sanders and Jordan Howard - and four players have had at least one 75-yard rushing performance during that span.

Special teams had issues in the return game. The opening kickoff was returned 79 yards. Also, Jalen Reagor allowed a kickoff to bounce at the 1 and scrambled to pick it up so the Eagles started at their 6.

Minshew was excellent in his first start of the season. He completed 20 of 25 passes for 242 yards and two touchdowns with no turnovers.

Linebacker Alex Singleton struggled in coverage. That was part of the reason he lost his starting job that he regained after Davion Taylor was injured.

Sirianni said center Jason Kelce (knee), linebacker Patrick Johnson (back) and cornerback Steven Nelson (shoulder) should be ready next game after exiting with injuries Sunday. Running back Jordan Howard (knee) also could be back.

15 - Kicker Jake Elliott has connected on 15 straight field goals, including four against the Jets. He’s 22 of 24 this season for a career-best 91.7% rate.