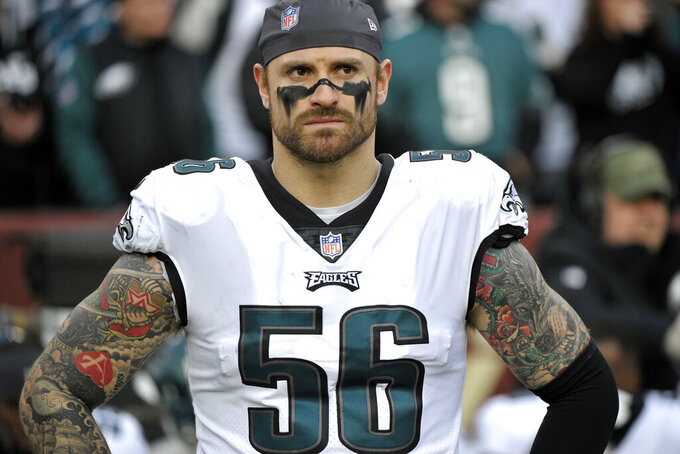 FILE - In this Dec. 30, 2018, file photo, Philadelphia Eagles defensive end Chris Long stands on the sideline prior to the team's NFL football game against the Washington Redskins in Landover, Md. Long has announced his retirement from football, ending an 11-year NFL playing career that included winning two Super Bowl titles and the Walter Payton Man of the Year Award. Long posted his decision Saturday night, May 18, on Twitter, saying it has "been a hell of a journey" and adds that "I can honestly say I put my soul into every minute of it." (AP Photo/Mark Tenally, File)

Long posted his decision on Twitter , with a tweet that included a picture of his right hand holding up a red cup with a grassy field, trees and mountains in the background.

"Cheers," Long wrote. "Been a hell of a journey. Eleven years and I can honestly say I put my soul into every minute of it. Highs and lows. I've seen them both and I appreciate the perspective. Gratitude and love to those who lifted me up."

The 33-year-old son of Hall of Famer Howie Long had 70 career sacks and 15 forced fumbles in stints with the Rams, Patriots and Eagles. He won back-to-back championships with the Patriots (2017) and Eagles (2018). Long was selected last February as the league's Walter Payton Award recipient for his outstanding community service.

He established the Chris Long Foundation in 2015 to impact communities nationally and internationally through programs focusing on clean water, military appreciation, and youth education.

In 2017, Long donated his entire salary to support education in cities where he has played: St. Louis, Boston and Philadelphia.

He was the second overall pick in the 2008 draft by the Rams out of Virginia. Long spent his first eight seasons in St. Louis before signing with New England as a free agent in 2016. He played his final two seasons with Philadelphia after joining the Eagles as a free agent.

"Chris was everything that we thought he was and even more — not only as a great player for our football team, but also in the community," the Eagles said in a statement posted on their website. "There aren't many players who can say they won back-to-back Super Bowls and the NFL's Walter Payton Man of the Year award.

"He accomplished both with class and grace. There's no question that his work ethic combined with his unique talent made him into one of the greatest of this era's professional athletes."