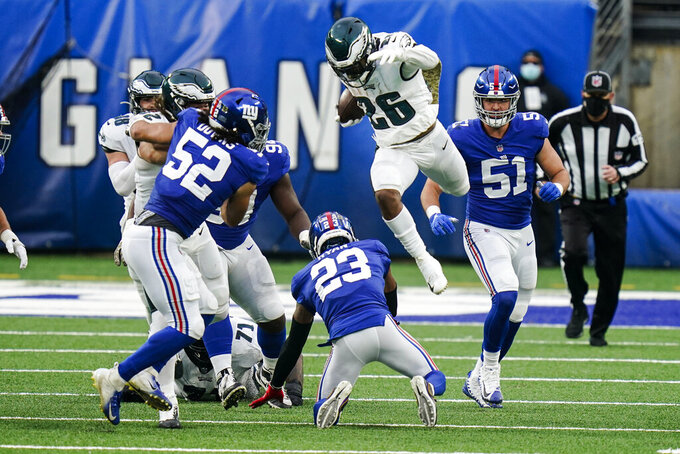 PHILADELPHIA (AP) — Doug Pederson is mad at himself and the way his team played following a bye.

“I don’t want to get in a situation where it becomes a knee-jerk reaction for me or for the team,” Pederson said Monday. “I have to sit back and I do have to evaluate everything. We’re still sitting here in a really good place in the NFC East. I know it doesn’t look pretty. We understand that. But there’s still a lot of ball ahead of us and there’s still a great opportunity for this football team moving forward and that’s the motivation.

“I’ll take a look at things and if there’s a chance to make a personnel change or whatever it might be, I’ll take a look at that, but I just don’t want to make a change to change. There’s got to be a reason for the change. I just know that it definitely starts with me and my messaging with the team, with the coaches, and getting everybody on board on the same page. Nobody’s pointing fingers. We are all pulling the rope in the same direction, and that’s what we’re going to do.”

The Eagles didn’t do much right against New York. Carson Wentz and offense were out of sync except for the first two drives in the third quarter. The defense couldn’t get stops. Special teams were sloppy.

“I’m disappointed. We’re all disappointed,” Pederson said. “The guys in the locker room at the end of the game, they were frustrated. They were mad. I look back, we’ve had 14 days since we played a game. And of course we went into the intensive protocol last week and things were a little different for us, but it’s still my responsibility to have the team ready to play and we came up short and the guys are mad. They are disappointed because of that. We are all frustrated. We know we’re so much better and we’ve just got to buckle in this week. Everything is still right in front of us and we’ve got a great opportunity on Sunday.”

Miles Sanders returned after missing three games and ran for 85 yards on 15 carries. Boston Scott had a 56-yard touchdown run and Corey Clement scored the only time he touched the ball. The trio combined for 153 yards on 19 attempts, but the Eagles passed the ball on 63 percent of the plays.

The defense can’t figure out how to stop quarterbacks running the ball. Daniel Jones had 64 yards rushing, including a 34-yard TD. Jones had an 80-yard run in the previous game against Philly. Lamar Jackson ran for 108 yards against the Eagles last month.

Scott has 180 yards rushing in the past three games, giving the Eagles a nice complement for Sanders.

0 for 9 — Eagles didn’t convert any third downs in nine tries. They were 1 for 3 on fourth down.

The Eagles visit the Cleveland Browns (6-3) on Sunday. Their next five opponents are 32-13.