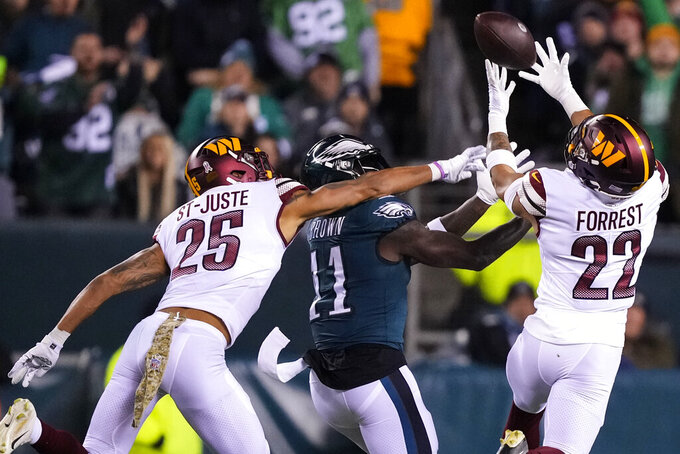 With good reason, Brown figured. Tennessee drafted Brown in the second round of the 2019 draft and he instantly became one of the top receivers in the game. He topped 1,000 yards receiving each of his first two seasons and had 869 in just 13 games in his third.

Big games for the Titans? You bet he had them.

Like his 10 receptions for 155 yards in a 2021 game against the Colts. Or the five receptions for 142 yards he had the same season in Tennessee’s playoff loss to Cincinnati.

Brown had well outperformed the contract that would have paid him $4 million in the final season of his rookie deal. Brown wanted $22 million, he said the Titans offered $16 million and the gap was enough to put him on the trade market.

The contract dispute was all the Eagles needed to swoop in and make the draft-night deal for Brown that instantly made him the franchise’s best wide receiver since Terrell Owens.

Philly paid up — a $100 million, four-year contract with $57 million guaranteed. The other big win for Brown was joining longtime friend and star QB Jalen Hurts to lead the Eagles to an NFL-best 10-1 record into Sunday’s game against the Titans (7-4).

“Of course it means a lot, but I’ve got to be professional about it,” Brown said.

Brown, though, is finally ready to make the Titans pay. Maybe not in the cash he wanted. But with an L on the scoreboard.

“I’ve come to peace about it,” Brown said. “I’m with the Eagles and we’re 10-1. We’re doing a really good job here. Of course, early on, I had mixed emotions. I changed my family’s life forever. That was the goal. I’m thankful for Tennessee, but I’m here in Philly now.”

Brown already has 53 receptions for 831 yards and seven touchdowns with the Eagles and has two games with 155-plus yards receiving. He caught three touchdown passes in a win against Pittsburgh, though he has fumbled each of the last two games and has 113 yards combined the last three games. Brown has contended with a lingering ankle injury and a stomach illness that sidelined him from practice last week.

He still is on pace to become the first Eagles receiver to top 1,000 yards since Jeremy Maclin in 2014.

Brown had no regrets about leaving the Titans.

Sirianni said he would tell Brown the same thing he always says when players prepare for a professional or personal homecoming game: Stay in the moment. Treat it as another game.

“Naturally human nature will take over, and that’s my job as a coach to make sure that he knows he doesn’t have to do anything more than just be A.J. Brown,” Sirianni said. “That’s why he’s here. That’s why we traded for him, that’s why we paid him, because he’s a phenomenal player. Just go be yourself. You don’t have to do anything special because you’re special enough to go out there and play.”

The Titans have moved on from Brown with Treylon Burks, who has 24 catches for 334 yards and scored his first NFL touchdown when he recovered Derrick Henry’s fumble in the end zone of last week’s loss to Cincinnati.

The Titans knew how talented and dominant Brown was for them. They just hope they don’t see it with the Eagles.

“I love A.J. and miss having him around, but he is doing well over there,” Titans QB Ryan Tannehill said. "I just hope it's is not too well on this Sunday.”

C.J. Gardner-Johnson, the NFL’s interception leader with six, is out for the foreseeable future with a lacerated kidney. He was injured in Sunday’s win against Green Bay. He was replaced by undrafted rookie Reed Blankenship, who promptly had an interception against Aaron Rodgers.

“I know he was in some pain on the field and he’s doing well right now,” Sirianni said. “As far as how long he’ll be out, you never really know with that and you know I’m not going to put a timetable on anybody.”

The Eagles started 10-1 four other times in team history and reached the title game all four times. They won the NFL championship in 1949 and the Super Bowl following the 2017 season, and lost the Super Bowls for 1980 and 2004.

The Titans' defense has not allowed more than 20 points in eight straight games — two of those are losses and that includes an OT loss in Kansas City. It is the longest active streak in the NFL and the franchise’s longest such streak within a season since 1993 (11 games).