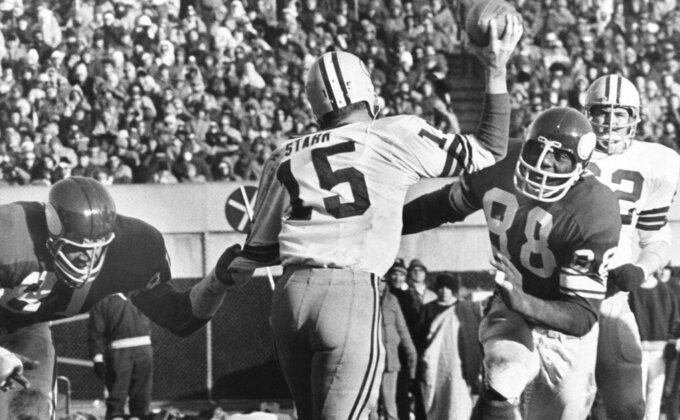 File-This Nov. 23, 1970 file photo shows Green Bay Packers quarterback Bart Starr (15) looking for a receiver as Minnesota Vikings Alan Page (88) charges him and Carl Eller (81), left, grabs his arm during the second half of an NFL game in Minneapolis, Minn. Pro Football Hall of Fame defensive tackle and retired Minnesota state supreme court justice Page has counted art collection among his many life pursuits, and the former Vikings star has two of his prized pieces up for sale through a New York auction house, each valued at more than $200,000. (AP Photo/File)

MINNEAPOLIS (AP) — Alan Page was married in 1973, midway through a Hall of Fame career with the Minnesota Vikings, and he and his wife soon went to work on covering the bare walls in the new home they had built.

The remedy was art, and their collection flourished.

Now, as Page's unparalleled post-football path continues in Minnesota in the intersecting spaces of educational opportunity and racial justice, two of the couple's most prized pieces are on the market. Diane Sims Page died in 2018, and her surviving husband and children decided the time was right.

The drawings of Jean-Michel Basquiat — “The Athlete” and “Starvation” — will be included among the 400-some items in next month's 20th century and contemporary art sale at the Phillips Auction House in New York. They're each valued at more than $200,000.

“It’s truly been an honor to actually learn more about Justice Page and his work. It really speaks to their foresight,” said John McCord, who is directing the sale for Phillips.

Basquiat, who died of a drug overdose in 1988 at the age of 27, drew and painted edgy, crude and eclectic images that have transcended his short life. One of his pieces sold for a record $110.5 million in 2017.

The Pages had no idea those drawings, purchased in 1985 from a gallery in New York at the suggestion of one of their daughters, would become so valuable.

“They just spoke to us both visually, but also in terms of sort of what we read into them,” Page said in an interview this week. “We lived in at the time and continue to live in a world that, for those who are fortunate, there is plenty. But for the accident of birth you could easily be in a place where starvation was real and literal. The athlete, given my athletic history, spoke to us also.”

Page played 15 years in the NFL, a six-time All-Pro with the famed "Purple People Eaters" who was so dominant as a defensive tackle he won the league MVP award in 1971.

He became even more prominent after leaving the game as the first Black justice on the Minnesota Supreme Court. After retiring from the bench in 2015, philanthropy and activism moved to the front burner. His wife, a market research expert, spearheaded the Page Education Foundation that was created to honor their shared commitment to supporting students of color.

More recently, Page joined Neel Kashkari, the president of the Minneapolis Federal Reserve Bank, to push for an amendment to the state constitution in recognition of the significant racial disparity in educational success that exists in Minnesota.