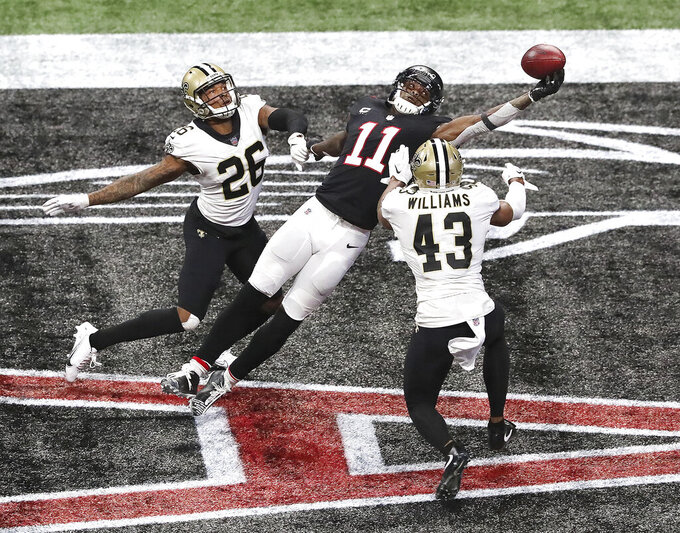 ATLANTA (AP) — Matt Ryan gave it one last heave to the end zone, hoping Julio Jones would be able to make a miracle play for the Atlanta Falcons.

Ryan and Jones couldn’t connect on a 39-yard Hail Mary pass as the ball fell to the end zone turf and Atlanta lost 21-16 to the New Orleans Saints on Sunday. The possession that preceded it, however, was hard to figure, with Todd Gurley getting stopped for no gain on one run and stuffed for a seven-yard loss on the next. That drive ended with Ryan and Jones unable to connect on a 20-yarder in the end zone on fourth down.

“They’re a good defense, that’s for sure,” Ryan said after completing 19 of 39 passes for 273 yards, one touchdown and no interceptions. “We needed to be in more third-and-shorts to give us better opportunities. We needed to play better. It makes for a tough situation against them.”

About the only good development for the Falcons was kicker Younghoe Koo hitting three field goals, improving to 7 for 7 from 50 yards or more and stretching his streak to 24 in a row overall.

Atlanta’s extended run of bad luck against the Saints started early as the Falcons dropped to 8-20 against New Orleans coach Sean Payton.

On the Saints’ second possession, Grady Jarrett’s seemingly innocuous roughing the passer penalty on third down gave the Saints new life. Taysom Hill followed with a 43-yard scramble, evading linebacker Mykal Walker at the sideline to keep the long run alive. The Falcons were guilty of blown coverage on the next snap as Hill and wide-open Tre’Quan Smith hooked up for a 15-yard touchdown pass and a 7-0 lead.

Hill’s second TD pass was nearly as easy, an 11-yarder to tight end Jared Cook for a 14-6 lead.

After Alvin Kamara scored on an 11-yard run to make it 21-9 in the third, the Falcons were nearly undone early in the fourth when Ryan lost a fumble at the Atlanta 18, but Steven Means forced Hill to lose a fumble that Deion Jones recovered at the 15.

That gave the Falcons their last chance to get in the game, and Ryan responded by driving the offense 85 yards for a touchdown pass to Russell Gage, cutting the lead to 21-16.

Atlanta’s offense fell short, however, on the ensuing possession when Ryan and Jones couldn’t connect in the end zone and the Falcons turned it over on downs.

“We knew we had an opportunity to win the football game,” interim coach Raheem Morris said. “Matt threw a nice throw to give Julio a chance. The ball fell to the ground, and it just didn’t work out. You’ve got to give the Saints credit. They fought through and won an ugly game.”

The offense looked nothing like the unit that could do little wrong in a 43-6 victory over the Las Vegas Raiders the week before, but the Saints have a stingier defense, one that hadn’t allowed a touchdown in 14 consecutive quarters before Ryan and Gage connected.

Ryan was sacked three times and hit eight in all. It was a marked improvement from the eight sacks he sustained two weeks ago in New Orleans, but he still was victimized by the Saints playing such tight coverage through most of the game.

“We needed to be more productive in the first half this week,” Ryan said. “We walked away with too many field goals and hope we can do better next week.”

Jones never got his hands on the last Hail Mary.

“I got hit when the ball was coming down,” Jones said. “If I would’ve have touched the ball, I would’ve come down with it and it would’ve been a different story.”