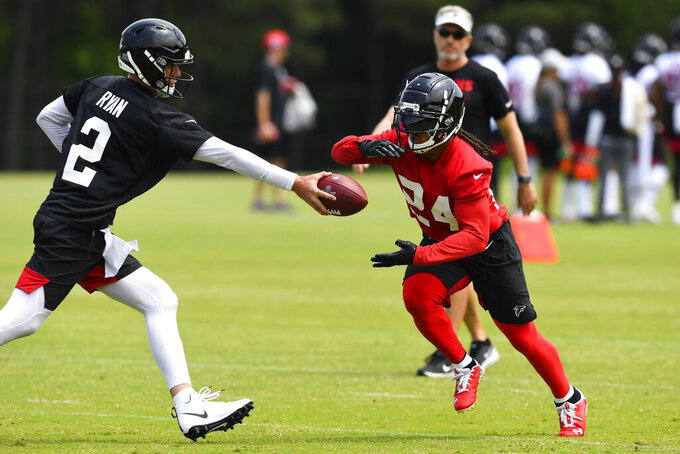 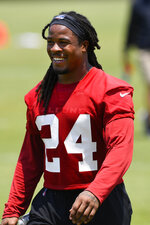 FLOWERY BRANCH, Ga. (AP) — The highlight of the Atlanta Falcons' first week of organized team activities has been Devonta Freeman's return to the field.

"It's been a long time," said coach Dan Quinn.

Freeman looked explosive in Thursday's practice, the first OTAs session open to reporters. Having Freeman again flash his dual-threat skills at running back is good news for the Falcons' hopes of returning to the playoffs.

Knee and groin injuries limited Freeman to only two games last season . The Falcons had a long list of season-ending injuries, including both safeties and both guards, but losing Freeman had perhaps the biggest impact on the team's fall to a 7-9 finish.

Without Freeman, the Falcons' ground game was stagnant , ranking only 27th in the league. The Falcons' other top running back, Tevin Coleman, signed with San Francisco as a free agent, so it was important to see Freeman in his No. 24 red jersey lining up beside quarterback Matt Ryan this week.

The Falcons are still waiting for starting safeties Ricardo Allen (torn Achilles tendon) and Keanu Neal (knee) to complete their comebacks from 2018 injuries. Both worked on a side field with trainers but could be ready for training camp.

Freeman has struggled to stay on the field since signing a five-year, $41.25 million contract before the 2017 season. At the time it was the NFL's richest contract for a running back. The deal's total value still ranks third for his position, behind Todd Gurley ($57.5 million) and Le'Veon Bell ($52.5 million).

The big contract brought great expectations, making two straight years of injury woes even more frustrating. He missed two games in 2017 following his second concussion of the year, including one in the preseason, and also was slowed by a knee injury. He was limited to 68 yards rushing in two games in 2018.

Freeman's trademark smile was back on Thursday, when he said the joy in football has returned.

"It felt good just to be out here running around and having fun," he said. "This is fun. Just having fun running around brought back memories of when I was a kid, playing in the middle of the field. It was fun."

Football wasn't fun for Freeman last season. He suffered a bruised right knee in the season-opening loss at Philadelphia, forcing him to miss three games. Then he landed on injured reserve with the groin injury.

"It was tough," Freeman said. "At the time I couldn't see the blessing that God had for me. But it was definitely tough not being able to go out there and compete and battle with my brothers. Just seeing all those guys, every time I watched a game, it was like 'Man, that was a missed opportunity for me.' I definitely took it to heart. I learned a lot from it, though."

Freeman has not been restricted this week but said "I'm still getting better."

"It's been awesome having Free back on the field and be back to having him look like himself," Quinn said, adding "to see the energy that he brings has been good."

NOTES: OTAs are voluntary. Among players not participating: WR Julio Jones, DT Grady Jarrett, OLB Vic Beasley Jr. and LB Deion Jones. Quinn said he has been in contact with each of the four. He said Julio Jones and Deion Jones "are still working on some rehab." He said Beasley is training on his own and is expected by minicamp. Jarrett signed his $15.209 million franchise tag which prevented him from signing elsewhere as a free agent. He set career highs with six sacks and three forced fumbles last season. Julio Jones missed OTAs and the mandatory minicamp last year before reporting for training camp with a promise from the team his contract would be reworked this year. Those talks are ongoing.