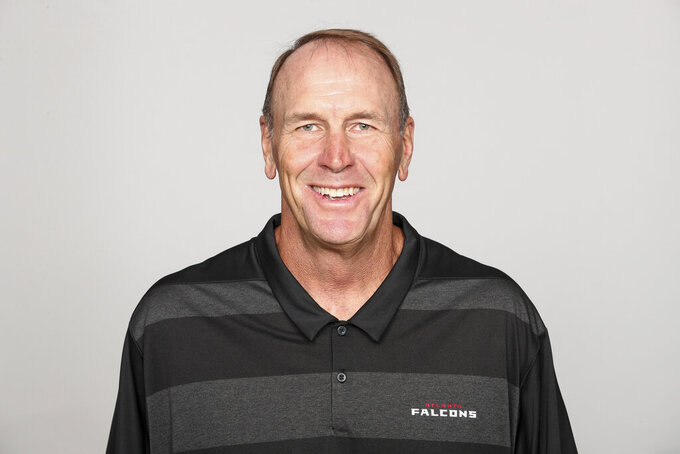 FILE - This is a 2019 file photo showing Mike Mularkey of the Atlanta Falcons NFL football team. Atlanta Falcons tight end coach Mike Mularkey is retiring after 25 years in the league. Mularkey is retiring after a one-year second stint in Atlanta. He is a former Tennessee Titans coach and also served as a head coach in Buffalo and Jacksonville. (AP Photo, File)

Mularkey's retirement came after he returned for his second stint in Atlanta, lasting only one season, to cap 25 years of coaching. He also served as a head coach in Buffalo and Jacksonville. He was 36-53 in six seasons.

The 58-year-old Mularkey was the Falcons' offensive coordinator from 2008, quarterback Matt Ryan's rookie season, to 2011. He returned to work on coach Dan Quinn's staff last year.

“I’ve been blessed to do this for a long time and have a lot of great memories from the game I love,” Mularkey said in a statement released by the team. “I’ve also missed a lot of time with my family who I love and who has supported me so much throughout my career. I am looking forward to spending even more time with them and making even more memories.”

In 2016, Mularkey coached Tennessee to its first winning season since 2011. The Titans reached the playoffs under Mularkey the following year.

“When you look back at his 25-year coaching career, you’ll not only see a great coach, but you’ll also see an unbelievable human being and leader,” Quinn said. "Mike has been a great asset for our organization and for me personally. We wish he and his family well and congratulate him on a well-deserved retirement.”

Mularkey played nine years as a tight end in the NFL with Minnesota and Pittsburgh.

Whitt was Green Bay's defense-pass game coordinator in 2018 and secondary/cornerbacks coach from 2009-17. He worked in Atlanta in 2007 as an assistant defensive backs coach.