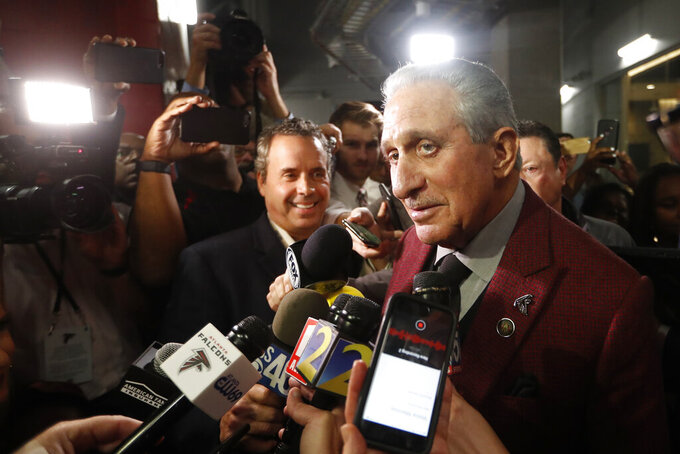 Blank said Sunday that he wants to get through it before deciding the future of Dan Quinn, whose team has lost six straight and 12 of 16.

"We'll take the next couple of weeks during this bye period of time and evaluate where we are and whatever decision we have to make will be made for the right reasons for the long term," Blank said.

"We certainly have a lot of intelligence on this coaching staff. Besides Dan, we have three other (former) head coaches. We've got four general managers in the building beyond Thomas (Dimitroff). You know, the knowledge base is there, but the performance is not."

Blank called an impromptu news conference after a 27-20 loss to the Seattle Seahawks, answering questions in a tunnel hallway at Mercedes-Benz Stadium for about five minutes after Quinn spoke to the media.

"We are going to think really hard and evaluate everything we can do as an owner and a senior management team to figure out if there's anything we can do to make some decisions any earlier, any later to help the process, but we have no plans on making any changes right now," Blank said.

Blank, whose purchase of the Falcons closed in February 2002, has fired Dan Reeves, Jim Mora and Mike Smith as coach. He decided not to retain Wade Phillips and Emmitt Thomas as interims and had Bobby Petrino abruptly quit in the final month of 2007.

Quinn, a former defensive coordinator with Seattle, went 8-8 his first year, then led the Falcons to an NFC title in his second season. Atlanta famously blew a 25-point lead and lost the Super Bowl to New England, but the team regained enough composure in 2017 to advance to the divisional playoff round, where its season ended at the 5-yard line at Philadelphia.

Injuries were a big reason the team struggled last year, going 4-9 before winning its last three when it had been all but mathematically eliminated from playoff contention. This season, though, has been a disaster from the start. The Falcons trailed 28-0 in the opener at Minnesota and nearly lost the next week to Philadelphia. They haven't won since.

Blank indicated his patience is wearing thin even though he said he likes Quinn personally and believes the players are still competing hard under his watch. If he decides to dismiss Quinn midseason, assistants Dirk Koetter, Mike Mularkey and Raheem Morris all have head coaching experience.

"This is a performance-driven business," Blank said. "I understand that. They understand that as well. I'm not bashful about making those decisions. In almost 20 years, I've had to do it almost five times now."

Sunday's performance was much like the weeks before. The Falcons trailed 24-0 at halftime and have a combined 144-50 deficit at intermission this season. Atlanta played a decent second half, giving itself an outside chance to get back in the game before running back Devonta Freeman lost a fourth-quarter fumble at the Seattle 1.

For the second straight week Blank's 3-year-old stadium wasn't close to half full, so those that bothered to boo didn't sound too loud as the team headed to the locker room at halftime. But continuing to see thousands of empty seats is difficult for Blank, whose Atlanta MLS franchise routinely fills the building.

"I understand the responsibility I have to the fans, sponsors, players, coaches, etc. to put a winning team on the field. We're still committed to that 1,000 percent and that's not going to change," Blank said.

"It's very painful because not only I'm an owner, but I'm a steward of the fans. I'm a custodian on their behalf, and I feel their pain. I truly do, and I see their pain and I understand what they're going through."

He doesn't know how much longer he can bear to watch.

"It's a bewilderment how we can play that way in the first half and completely differently in the second half, but that's kind of been typical of the year. We haven't had that kind of consistency to win games," Blank said. "Whatever the reasons are, they are, but it's just not acceptable on any levels and we have to continue to think about what's best for the franchise and the team on a long-term basis. We'll do that."